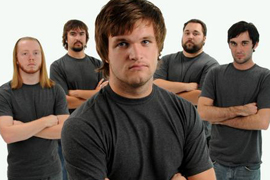 Facedown Recording artists, Onward To Olympas, will soon be releasing their debut CD, This World Is Not My Home, and are preparing to take their music and message on the road. The band has a solid tour schedule for 2010 and they plan on touring for at least the first eight months. This World Is Not My Home is filled with blistering guitar riffs that offset a ferocious vocal assault that guarantees the listener will be banging their head. Lead singer Kramer Lowe was more than excited to speak with me about the band and their music.

You guys have put a different spin on the whole death metal scene. In a genre known for dark and often demonic themes, you have done the exact opposite, adding spiritual even religious themes. Do you think this will sit well with fans of the genre? Has there been any backlash from the Extreme Metal community? What about backlash from the religious community?
Kramer: We all know that a lot of metal comes from the dark style but all of us in the band love the style of music and we all are here because of God. We’re all Christians in a band doing what we love and able to do it because of Jesus. We write about what we’re passionate about or what’s on our mind and a lot of it is about our relationship with God. With the metal community they usually respect, but some just question, how we’re a Christian band. And religiously we get a lot of support but some question the fact as well.

The name Onward To Olympas sounds as though there is an interesting story behind it. Where did it come from?
Kramer: Olympas is a term in the bible that often refers to “heaven” or “heavenly.” So our name means Onward To Heaven. We usually get a lot of questions about where our name came from due to the spelling.

You worked with Jamie King, a very well known well respected producer. How did you get in touch with him and what was it like working with him?
Kramer: Well being in a band from NC you already know Jamie King. When the current lineup was figured out we booked time with him. It was such an honor to be there and work with such an amazing producer. Jamie is really laid-back and awesome to be around. He helped polish up this album and make it sound amazing! We’ll definitely be going back with him next record.

What was the writing process like for This World Is Not My Home? Did you guys collaborate on the writing or was it more the efforts of one member of the band?
Kramer: We all got together and shot out each person’s ideas and some how put it together. We didn’t really have a lot of time to write this record but we’re still proud of how it came out. I feel the next CD will really show what we have and bring out a lot of what we couldn’t do in this one.

Give us some insight into the albums title, This World Is Not My Home.
Kramer: Basically as Christians we all know that we’re on our way to living for eternity with our Lord and Saviour. So the lyrics basically state that “This world is not my home, I’m only here to share the message, This world is not my home, I live behind the gates.” The album is about overcoming the past and being tired of what the world has to offer. God has really blessed us all with this opportunity so we’re here to share the message and cannot wait to be in heaven.

What is the hardest part about being in a touring metal band and what is the greatest obstacle your band faces?
Kramer: To be honest we haven’t had a chance to tour yet. But I feel that the greatest obstacle will probably be van troubles. I hear about a lot of those since knowing people in touring bands. We’re all just ready to get out on the road and push our name as hard as possible and do anything it takes to get out there and create a huge buzz.

What has been the most memorable moment of your career so far?
Kramer: Well we haven’t really started full time yet until February, so for now it has to be signing the contract at the show we played with Between the Buried and Me. Both of those things were really awesome to do since it was my dream to just even be in a band and listening to them growing up and signing a record deal in the same night.

Many of your songs are so hard and intense that I am sure they translate well into a live environment. How does it make you feel when the emotion and/or power that you envisioned comes to life in front of a crowd?
Kramer: Playing live is our favourite thing to do. Since we write heavy songs, I’m not going to sit there and just sing them to you. We love to just get out there and have as much fun with it and as much energy as the songs have. I also really love when the crowd starts singing along and jumping up for the mic.

How much roadwork do you expect to be doing this 2010?
Kramer: We will be hitting the road really hard in 2010. We plan on doing at least 8 months out of the year. Right now we got about a few tours in the works and lined up through June.

Are you looking at any particular bands you’ll be touring with?
Kramer: We just announced our first tour in the mid-west with our label mates “Hands,” which we are extremely stoked on! We also are working on a Facedown U.S. tour, which should be announcing soon. And you’ll probably be able to catch us with our friends in Before There Was Rosalyn sometime this year.

Any closing words?
Kramer: I’d like to thank God for blessing us so much and everyone in the Facedown staff for giving us this opportunity. Thanks to PureGrainAudio for this interview! And if anyone ever has any questions or needs anything don’t be afraid to shoot us an email. We’d love to talk with you!  [ END ]