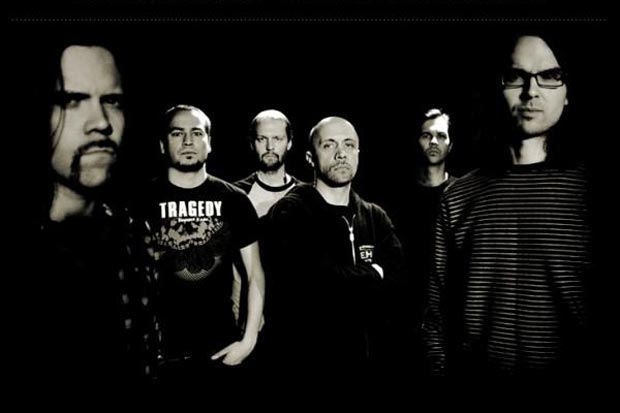 Ghost Brigade’s newest offering, Isolation Songs, was released six months ago on Seasons Of Mist Records and has been receiving critical acclaim ever since. The band combines a brutal metal assault with lots of melodic moments that add up to one hell of a disc. Isolation Songs is loaded with balls out metal but also contains eerie, ethereal, almost ambient breaks that add variety and dimension, which I found to be quite enjoying. Recently, guitarist Tommi Kiviniemi took some time out of his busy schedule to answer the following questions for PureGrainAudio.

Now that your brand new CD, Isolation Songs is complete how do you feel about it? Are you satisfied with the outcome?
Tommi: Yeah, definitely. Now that it has been almost six months since it was released, we could not be more satisfied with the album and the outcome of it. We thought that we did a really good album, the best so far and with such effort and heart that we could not give more now. That’s why it’s been a privilege to receive all the great feedback.

Give us some insight into the record Isolation Songs and the meaning behind its title?
Tommi: On Isolation Songs you can hear maybe more nuances and the extremities taken a bit further. It is a solid album and a kind of “musical narration” of the time between first two albums. The meaning or more like a crucial point behind the title is that the word “isolation” pops up in lyrics here and there and can be associated throughout the record. It is the glue and the basic idea between songs; how they are composed, put together and recorded, in some kind of isolation. Hence, “Isolation Songs”.

When you begin to put this album together, were you concerned at all about commercial success?
Tommi: Nope. It is not a thing to worry about. I mean, if you start to worry things like that, you cannot make music with your whole heart in it. It just brings pressure and blocks your ways to do what you want to do. We just thought that we were going to make a new album and it is definitely going to be better than our debut. Our record label Seasons of Mist didn’t put any commercial pressure on us either, which is pretty much a perfect situation I think.

What can fans expect when they pick up a copy of Isolation Songs?
Tommi: A more mature, more confident and naturally aged Ghost Brigade. Isolation Songs contains more thoughtfully arranged songs and it’s also a way more solid album in its entirety than the first one.

Can you talk about some of the subjects you tackle on this record?
Tommi: The mood and the overall feel in the album go through every emotion from hope to despair. Lyrics contain pretty simple stories from life, you know. From hard times to good times through difficult decisions in life. I see it as a collection of certain types of thoughts that you find yourself pondering when you’re alone and really don’t want to share anything with anybody.

Playing such visceral music in a recording studio must be vastly different from at one of your chaotic live shows. How did the recording process go for this disc?
Tommi: Yeah, it’s different, however, in my opinion it’s basically the same difference to play on stage or in the studio if the feeling is right. Major differences are on the technical side, considering the setup and the position you are playing, etc. The recordings went really well I think. At least a lot better than the recording on the first one. We were of course more prepared of what was to come, as well as for possible problems. We recorded everything except part of the vocals at Seawolf Studios in Helsinki, located at Suomenlinna, which is an island just outside the city. The atmosphere is really good for studio work partly because it is detached from the city. Also the scenery and the surroundings are pretty rough in wintertime, so maybe that gives some edge to the bottom line of the album.

How quick are you in the studio? Can you usually knock things out in a couple takes?
Tommi: It depends. I mean, some of the parts took hours and hours to record, just to get them right and with the right feel. I do not recall much of the stuff being recorded on the first take. But overall, we are pretty quick in studio. It is like a mentality that forms within us that we are there to get the job done, not to party. We party afterwards as a reward for a job well done.

Could you tell us where the name Ghost Brigade comes from?
Tommi: I remember that we were talking about the band name and that it should include the word ‘Ghost’ in it. I think it was bass player Janne who came up with the idea. The word ‘Brigade’ is taken from a song by Danish alternative pop band Mew, called ‘Snow Brigade’, which is by the way one of the best pop songs ever written.

How has MySpace and the internet affected your band and do you think downloading helps or hinders the artists?
Tommi: From the artist point of view on this level in which we are now, I would say downloading has hindered us all. I do not encourage people to download music; I think it is just something you have to deal with nowadays. MySpace is just a good way to get your music to everyone’s home with an internet connection, which is a lot today. It’s been a good channel for us definitely.

What song from this album is the most exciting for you to perform?
Tommi: It’s very hard to say actually. At this time, I think it is “Lost In A Loop”. For me the groove and the sludgy aggressiveness on the song really gets me going. The tempo is just right for a good head banging.

What does the future hold for you guys as a band?
Tommi: If I could say, this all would not be actually worth anything, right? One day at a time. Seriously, hopefully more and more gigs around the globe and lots of good times, which could lead into nothing else than a killer next album.

Any closing words?
Tommi: Never compromise when living your dreams, whatever they are. Peace.  [ END ]