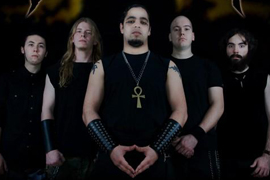 Canadian Death Metal band Aeternam is set to release their debut CD, Diciples Of The Unscene on February 16th, 2010. While this CD is quite brutal and aggressive, the band mixes things up a bit by successfully combining plenty of melodic guitar solos with a quite noticeable Middle Eastern influence. Aeternam has shared the stage with acts such as Quo Vadis and Suffocation and they are planning on taking their unique brand of Death Metal to the masses in 2010. I spoke with drummer Antoine Guertin about the band and their debut CD, Disciples of the Unseen.

The name of the band Aeternam is interesting to say the least and sounds as if there is a story behind it. Where did the name come from and what is the story?
Antoine: If you translate it literally, Aeternam means Eternity in Latin, and refers, for us, to the eternal knowledge that lies within the ruins of the ancient civilizations of our world. By looking at our past we will find who we really are. But sadly, not so many people have interests in history because Hollywood is much more sensational, I must admit. There may be a little story to tell for the name, but it would be so boring (no evil guy, no cute girl, no punch…) so we should skip right to the next question!

Your brand new CD titled Disciples of the Unseen is set for release on February 16th. Now that it is complete, how do you feel about it? Are you satisfied with the outcome?
Antoine: We can’t wait to present the album to the world since it’s been ready for a while now. Everyone in the band seems really satisfied with it, despite the fact that we had a few difficulties during the recording process regarding keyboards and stuff like that. You know, the first time you do something in your life isn’t always the best time, and you learn from your mistakes, so we won’t do them again.

What was the writing process like for this CD? Did you guys all write together? How long did it take?
Antoine: Basically, most of the songs are written the same way: Achraf, our frontman, writes a song, presents it to us, and after I make the arrangements, write the keyboards, harmonies, chords, new riffs and all that stuff, we record a first version to get used to the song. Then we jam it in our creepy practice room, and adjust the last things all together. Sometimes, the other guys come up with a good riff that Ash includes in a song. In the first years of the band, we composed around thirty songs in order to find our proper sound. Only ten made it on Disciples of the Unseen, and two of them were composed only three months or so before entering the studio. We tried a lot of things, but when Ash came up with “Circle in Flames” the oldest track that you can hear on DotU, we knew that little oriental feel was here to say.

Give us some insight into the record Disciples of the Unseen and the meaning behind its title?
Antoine: Disciples of the Unseen is not a conceptual album, although all the lyrics revolve around the same theme. On the surface, all of the songs talks about ancient civilizations and rites, a few of them are more engaged against religion while some are completely inspired by mythology, all stuffed with characters and stories, fictive or not. The title “Disciples of the Unseen” comes from Est-ce qu’on le dit clairement?

The artwork is quite amazing. How is it tied to the album’s title?
Antoine: Yes, it is pretty awesome! We recently made a few t-shirts with that drawing and it seriously kicks some ass. Like I said, Depends de la réponse plus haut.

This is your debut release on Metal Blade Records. How did you first gain their attention?
Antoine: When the album was ready, we uploaded a few songs on to our MySpace page. After reading good local reviews and listening to the songs, the Metal Blade guys came up with an offer we could not refuse. It’s pretty awesome to get a chance to be signed on a major label like Metal Blade, and now that we know our music and message is going to be known worldwide, it seriously gives us the right motivation to continue, despite the fact that some of us are still busy with studies in university and college.

You worked with JeF Fortin, a well respected producer. What was it like working with him? Did he push you in unexpected directions?
Antoine: It was our first experience in studio and I must say that JeF has been awesome in every aspect. Being a really friendly person, the process was made without an inch of stress, and was very rewarding for us individually as musicians. No need to say that studio life is pretty cool too: Recording all day long, eating and drinking some… water. JeF did help us in some aspects with the songs, but we had our own and strong idea of what the album should sound before entering the studios, so everything went very quickly and naturally.

This new album is a solid death metal record that is reminiscent of the genre’s earlier days, but it does manage quite a few surprises. Do you spend a lot of time trying to vary the music or is it something that just comes naturally?
Antoine: The music comes out naturally. We tried a lot of things while writing those songs for the album, and if there is anything we learned it is that trying to force things just to try to make, for instance, more complicated and technical songs won’t make it. In every aspect of your life, the best thing is to always be yourself and not try to be someone else. I think that in music it’s the same. So every song on this album came out naturally. We are not attempting to fill a specific spot in the metal tree by calling us a pure Death metal band or whatever else, and that is why you can find a lot of elements on the album: we don’t threaten ourselves with barriers.

You guys are from Canada yet there is an undeniable Middle Eastern influence mixed in with pure crushing Death Metal. Where did this influence come?
Antoine: The answer is Achraf Loudiy. That dude, who happens to be our frontman, comes from Morocco and moved to Canada only 3 years ago, where Alex and I met him to form Aeternam. That is when he came up, like I said, with the song “Circle in Flames” that we decided to incorporate that influence to our songs. Quickly, everyone in the band got into this music and this has become now natural for us to use these scales and beats when we play music. We are lucky enough to have this guy because he adds a considerable dose of credibility to the sound of the band by being Moroccan. He commonly speaks Arabic, which is in fact his mother tongue, so we can incorporate a few sentences in Arabic to our songs, or even the whole lyrics in the case of the acoustic song “Iteru” that you can hear on Disciples of the Unseen.

This record takes chances artistically. How hard is it to take chances with your music in an industry that is declining?
Antoine: There has been hype around folk metal these last years. I personally don’t call us a folk metal band and I don’t think that any of the known oriental metal bands are being classified this way, but nevertheless, this type of music gets more and more appreciation these days, because it’s kind of new. With our multi-cultural world it’s easier to listen to music from different cultures, and it’s becoming part of our life to live with people from different minds and places. Mass population gets more open to this, and that is why I actually believe that incorporating elements of different cultures in the music could help the industry to regain some new attention… who knows?

How much roadwork do you guys have planned for 2010? Are there any bands you will be touring with?
Antoine: We have a couple of shows booked here and there around our place right now. We still have a lot to learn and more experience to get before leaving for a tour, but we are currently working on getting on the road this summer to promote the album. As for the bands, I simply can’t tell you because I don’t have any idea of what to expect, so let’s see what the future will tell.

Any Closing words?
Antoine: Thank you so much for this interview! See you soon on the road, and be sure to catch up your copy of the album on February 16th! Rock on!  [ END ]