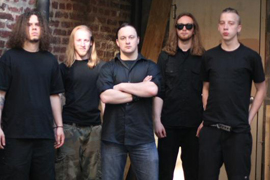 Fallen Martyr – “All In”

the Skinny: Hailing from Maryland, melodic metal monsters Fallen Martyr deliver an expertise attack in fret board wizardry, epic song structure, and metal theory. Beginning their reign in 2005 with Doug Albers (bass) and Gabriel Luis (lead guitar), the duo tapped vocalist Ryan Rawlings, who spent much time perfecting his trade at the Musician’s Institute in Hollywood, where now Rawlings [Ryan] can really let loose his classically trained vocal range. Following this, Michael Gerlach (second guitar) and Jake Ford (drums) entered the picture, and the young shredders began work on their first EP, The Six Roots Of True Will.  [ END ]