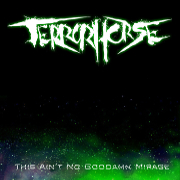 The horror, the terror, the dark horses have galloped out of London, Ontario and into our ears. Yes I am talking about the band Terrorhorse, who recently saddled up and recorded their EP This Ain’t No Goddamn Mirage. Now it’s your turn to saddle up; get comfy and listen to what I have to say about this release.

Having shared the stage with bands such as Darkest Hour, The Black Dahlia Murder, Arise And Ruin, Means, Winds Of Plague and other notable acts, Terrorhorse were well prepared for their tour across Western Canada; drawing in new fans. Through all these shows they have been able to build a strong metal following. Growing a fan base eventually led to their five track creation, This Ain’t No Goddamn Mirage.

The EP opens with the song “Rapid Eye Movement” where the whole band comes in right away creating a strong start to this deathcore album. The record stays consistent with heavy/complicated songs that make you feel like you’re in the middle of a stampede. Matt Macintosh and Richard Leblanc play some very heavy guitar riffs with many breakdown parts. They also throw in some complicated riffs which can be heard at the beginning of the song “The Gate” and in the song “Packet Flier”. At the end of “Robo Sapiens Sapiens” they reveal their softer side as they play melodic, clean guitar.

Joined in the heavy string parts is Aaron Vanduynhoven who backs up the guitars with some heavy bass. Aaron also adds samples and/or keyboards into songs both of which can be heard in “Heffer Exploder”. Cameron Fleury hooves in some heaviness with the drums and with simple hardcore beats and drum fills you can feel the energy. The last member to add to the Terrorhorse sound is Darryl Bedard who brings in low grunts, shouting and pig squeals.

After saddling up and reading this review you now know about Terrorhorse and their thunderous sound. The obvious question is… where can you get this release? Well ride on over to their official web site, see links above, and download This Ain’t No Goddamn Mirage for free. Then tell your friends to join the stampede. The EP is also available for sale in hard copy. This is for fans of Job For A Cowboy, Psyopus, The Red Chord and Beneath The Massacre.