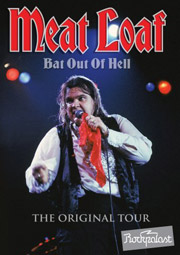 Bat Out Of Hell was released on October 21st 1977. Jim Steinman’s incredible song writing, Meat Loafs enigmatic stage presence and the production of Todd Rundgren proved to be a winning combination and the album eventually went on to become the third best selling album of all time, behind AC/DC’s Back In Black and Michael Jackson’s Thriller.

Filmed on July 25th, 1978 in Germany, Meat Loaf Bat Out Of Hell, The Original Tour, captures the incredible chemistry between the performers in a live setting. The instrumental tune, “Great Boleros Of Fire”, gets things started and the anticipation gradually builds as the crowd awaits Meat Loaf’s dramatic entrance onto the stage. He throws himself into the music with such an intensity and passion that it almost becomes palpable, even on DVD.

By the time they get to their big hit “Paradise By The Dashboard Light” everyone in the band is so charged up and emotionally invested that it is electric. Meat Loaf and Karla Devito turn in a performance that is nothing less than stellar. The band close things out with another one of their huge hits “Two Out Of Three Ain’t Bad” followed by a reprise of “All Revved Up With No Place To Go”.

Also included in this DVD package is an interview that apparently was recorded just before this performance. During the interview both Meat Loaf and Jim Steinman talk about the recording of this classic CD as well as the inspiration behind the writing of it.

At the end of the day, I feel that this DVD is worth checking out. It is a killer performance from a band that truly took the music world by storm. Even though these songs are over thirty years old, they still seem as fresh and vibrant as ever, they are timeless Rock and Roll classics that never seem to lose their relevance.

Check out the: “DVD Trailer”