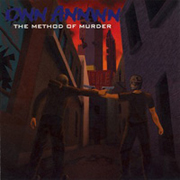 It’s always a fascinating exercise to track a band’s career and hear how they have progressed from their earliest material to the sound they have now. Tapping into this 2006 full-length by Cwn Annwn, you get a glimpse at a talented but still new band that was obviously trying to find a sound to call their own as well as a group still working out how to really play as a cohesive unit.

The four members of this Minnesota group are not spiraling off in their individual directions, making for some sort of soupy, proto-jazz mess, mind you. They do stick together fairly well throughout the nine tracks here. But too often you can see the seams showing: the kick drum hits that sit just a hair behind the rest of the rhythm section, the occasionally spotty playing and a vocalist – Neil James – who, on tracks when he tries to sing rather than shout, comes off as amateurish and simpering. Not surprisingly, the songs when James is at his most wobbly were recorded way back in 2003 and are tucked at the end of this disc.

Nor should anyone familiar with this disc be surprised that the group has since brought on a new lead singer, Julie Schultz. Her dynamic snarl of a voice has added the right leavening element to this band, mixing well with their Iron Maiden-style attack and James’ guttural growl.

There are sparks of what Cwn Annwn has turned into on The Method Of Murder, courtesy of blistering tracks like “Kill Or Be Killed” and “Contact” as well as guitarist Harry Rostovtsev’s solos that rely heavily on color and texture instead of showy fret runs or displays of pure speed. They certainly weren’t as good a band as they are now, but having this disc provides some fascinating historical perspective. [ END ]