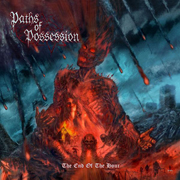 When getting to know the second band or side project of a prominent musician within the scene, it’s very difficult not to draw immediate comparisons to that person’s main project. This is well exemplified with the case of Paths Of Possession, as the band features George “Corpsegrinder” Fisher of Cannibal Corpse on vocals. However, as any fan of Corpse will know, George is more of the “give me the lyrics and I’ll sing ‘em” kind of guy; he doesn’t particularly care to influence musical style or direction. That being the case, it’s possible to take a look at The End Of The Hour from a relatively objective standpoint.

The production on the album is immediately striking. There is some serious meat on these bones, and checking the credits explains why: it’s a Mana Studios, Erik Rutan production. For those who don’t know, Rutan is the guy responsible for the sound on the last two Cannibal Corpse albums, the last Vital Remains album, and all of his own Hate Eternal releases. Needless to say, the man knows his death metal and Paths Of Possession made a great move going with him.

As for the music itself, POP put forward standard, well executed death metal. The riffs and song progressions sometimes point towards a European melodic influence, and at other times the brutality of George’s vocals and the menacing atmosphere the album creates turns it into something a little darker.

There isn’t much more depth to The End Of The Hour than that. It’s more of an album you put on in the background while having a beer with some metalhead buddies than the kind of thing you get super psyched about and have to show everyone. George’s voice really is the most standout element, which is fine, because the majority of people taking a chance on this band are probably doing so because of him.  [ END ]