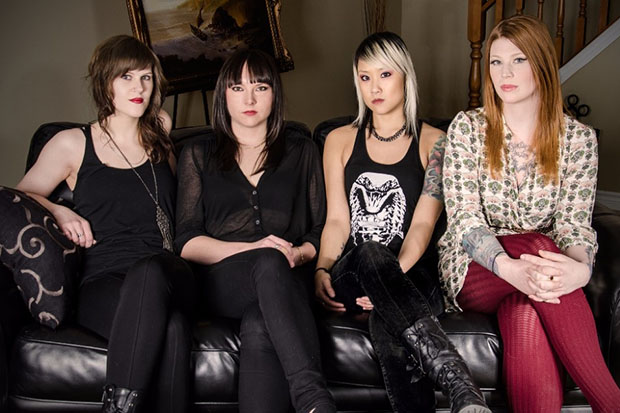 The Canadian rockers Kittie have had an extremely busy year. They have headlined a tour and released a new CD In The Black on September 26th. I have been a fan of Kittie’s music for a while now and I think that the tracks on this new CD are heavy while still managing to maintain a vibrant, fresh and extremely entertaining sense about them. The ladies will be heading to Europe in January and then they plan on following up with another tour in February. I recently caught up with vocalist/guitarist Morgan Lander during a break in her schedule to discuss the new CD, In The Black and what the future holds for Kittie.

Every band has its musical influences. What are some of the other bands and artists that have greatly influenced you guys and your music?
Morgan: As individuals, we all have our own favorites, and because our influences are so widely diverse, it is hard to chose just a few bands that influence our sound. While all of us agree on the greats, such as Metallica and Pantera, each one of us sort of brings our own influence and flair to things. Ivy and I listen to a lot of metal, Tara is very influenced by blues and jazz, while Mercedes listens to a lot of indie bands and lighter melodic stuff.

Your brand new CD titled In The Black was released on September 26th, now that it is complete how do you feel about it? Are you satisfied with the outcome?
Morgan: I love the new album, and the way that the songs and the recording turned out. The perfectionist in me can always find something I would have liked to do differently, but as a whole I think this album is stellar!

What was the writing process like for this CD? Did you guys all write together? How long did it take?
Morgan: The writing on In The Black was a collaborative effort unlike any we have really done before. On previous albums, Mercedes and I did the majority of the work. However, with In The Black everyone in the band contributed to the writing and ideas that went into the music. I think that is why it sounds so multi-dimensional and complete.

What has been the most memorable moment of your career so far?
Morgan: I always like to think that the best is yet to come, but some obvious highlights have been Ozzfest, touring with Pantera and playing in South America.

How do you feel your live shows differ from your CDs?
Morgan: Live is our time to shine! Our live shows are very raw and aggressive much like our new CD, but there is a particular energy and attitude with our live shows that just cannot be captured on CD. We absolutely have fun on stage performing, and that appreciation is quite evident at a Kittie Show. It’s powerful, aggressive, cathartic, yet somehow light fun and playful.

Do you find it difficult being an all woman band in an industry predominantly dominated by men?
Morgan: I believe that there are challenges to be overcome with any band in the music industry, no matter who you are. Yes at times the scrutiny and certain ideals and biases can be difficult or confusing, but ultimately, our main focus is on the music.

What kind of music are you listening to? Do you keep abreast of new music?
Morgan: I am actually not so up to date anymore with a lot of music, particularly within the metal scene now a days. My iPod is currently filled with stuff like Metallica, Carcass, Testament, Acid Bath, At The Gates, Van Halen etc. I think the newest album I have been listening to lately is Behemoth’s Evangelion.

How do you relax when you have a day off or in between tours?
Morgan: I Love a day at the spa! I like to watch movies, go to the Gym, listen to music… Basically just chill.

How much roadwork do you expect to be doing this 2009?
Morgan: 2009 is actually done for us, as we did a US headlining tour this September/October, but expect to see us in Europe in January 2010, and hopping on another tour for February… Hopefully there is more to come!

When you are on the road for a while I am sure you see and experience many different things you might not even have known existed. Are there any stories that stand out in your mind as being exceptionally strange or odd?
Morgan: At the moment the only stories I can think of mainly involve the people that ask us bizarre questions about being from Canada. Like does it snow there all year round? Or do we have dog sleds? Do we celebrate Halloween? Aren’t all Canadians vegans or something? Sometimes the ideas and misconceptions people have about Canada are pretty funny.

What is the one thing you travel with that you just cannot live without?
Morgan: Definitely a toothbrush. I would go crazy without it!

What does the future hold for you as a band?
Morgan: We will continue to make music, to tour, to persevere.