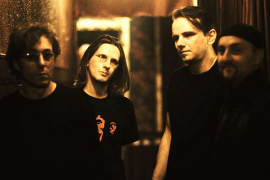 The Skinny: Playing Toronto’s newest venue, The Queen Elizabeth Theatre, on September 30, 2009 to a sold out crowd was UK’s Porcupine Tree, whose sound can only be described as progressive, experimental, psychedelic metal. Spencer Matulaitis had a chance to sit down with bassist (among other things) Colin Edwin. They chatted about the new album, the variety of sounds the band produces, their career so far and what the future holds for Porcupine Tree.