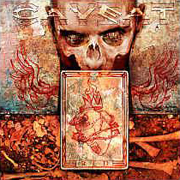 “Copying of this album is punishable by crushing!”, reads the warning engraved on the back of the booklet for the new Caveat album Red. Presented in a blood-red jewel case only reinforces the fitting and memorable name of the album. This album comes packaged to impress.

Before giving this disc a listen, take the time to appreciate the artwork; it will jump out at you. The illustrations are done by Shane Hawco who draws designs for video games and sings for two local Alberta, Canada bands. The artwork maintains a concept throughout the album of buried skeletons and depicts the four members of Caveat on memorial stones. The album is as much a tribute to Shane Hawco’s artistic abilities as it is to the musical abilities of Craveat.

After appreciating the art, it’s time to enjoy the music. The first track “Red” starts off with guitar tapping which progresses into thrashing riffs and fast-paced vocals by Greg Musgrave. The vocals consist of growling and distorted singing accented with a few high pitch parts. The guitaring on the album is also fast-paced and brings in old thrash metal elements that have been lost by newer bands. For the most part, the drumming on the album is generic metal drumming. For a fun ending to the record, after the last song “Within The Weakness” wait for about 12 minutes and enjoy a random audio clip of someone chugging back a beer.

Red brings an equal blend of old and new metal and has definite appeal for all ages of metal fans. The release is also certainly for fans of Burning The Day, Testament, Inner Surge and Zimmers Hole.

Check out the song: “Red”