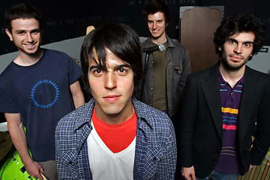 the Skinny: San Francisco quartet Birdmonster are kind of like a Bay Area version of Ted Leo & the Pharmacists, except that where Leo and his group have an undying devotion to first-wave new wave and ska groups likethe Jam and the Specials, Birdmonster spike their Fugazi-like indie rock tunes with nods to American Beauty-era Grateful Dead and early Bruce Springsteen. Revved-up and punky rockers share space with country-inflected tunes that feature banjo, melodica, and cello, with singer/songwriter and guitarist Peter Arcuni’s lived-in vocals the primary point of connection. Arcuni, a native of San Diego, formed Birdmonster in 2004 with three fellow musicians who lived in his San Francisco neighborhood: his childhood friend bassist Justin Tenuto(who also adds banjo, melodica, and a ’70s vintage Fender Rhodes electric piano), guitarist and pianist David Klein, and drummer Zach Winter, who doubles on cello on the quieter songs. Determined to maintain complete D.I.Y. control over their band, Birdmonster released their self-titled debut EP on their own and used the proceeds both to tour the nation and to fund sessions for their full-length debut with the well-known producer Bradley Cook, who had previously worked with Foo Fighters and Queens of the Stone Age. Although the band originally self-released 2006’s No Midnight as well, the increasingly positive buzz around Birdmonster led them to sign a distribution deal with noted indie SpinArt Records, which re-released the album in August 2006. For 2008’s Americana-tinged From the Mountain to the Sea, the band switched to the Fader label, releasing the album digitally that August and physically a month later.  [ END ]