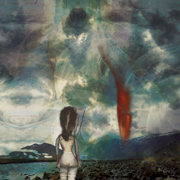 Leaf are a quartet band hailing from Texas in the US. They consist of Jason Thumann on vocals and synths, Mike Sutphen on guitar, Chris Kubecka on bass guitar and Coffee on drums. They are a progressive rock band with hints of indie, straight out rock and chunky industrial riffs. They have been together for just over ten years now and First Kill was recorded with the hope that their music would spread further out from Texas.

Overall, the album is very good. It’s got a good mix of heavy rock and softer rock. The riffs are chunky and are complemented with a heavy, pounding bass which adds a fast paced sound to the catchy choruses. First Kill is a short album, but every minute is filled with good rock music and on first impressions you feel they should be able to spread their fan base.

“Bear Tracks”, the first song, is a great album opener with a hard and fast riff throughout. The only disappointment, was the synth sound which was a little ear piercing. Thankfully Jason does produce better synth sounds as the album proceeds. “Game Box Kid” and “11:38” were good songs and very listenable, but it isn’t until track 4, “Who Is It?” that we see Leaf at their best. The chorus in this song is extremely catchy and will be infectious to the ears of hard and softer rock listeners. The synth fits in perfectly and the pounding bass during the chorus is such an important element to complete Leaf’s sound with the guitar and drums. There’s almost an early Foo Fighters esq outro to this song too, which really opens up Leaf’s melodic potential. Overall “Who Is It?” is an instant classic, hidden in the middle of the album. “Tracers”, the penultimate song is also a great song with Foo Fighter pop cleanliness spreading all over it. After the two best songs, the last track “See What Happens” is a slight let down, although it doesn’t compromise the quality of the album.

It’s clear that Leaf are a fantastic band and there’s no reason why they can’t spread their fame out of their home state. They have some great potential and they are heading in the right direction. It’s a great, short record and you should purchase today.  [ END ]