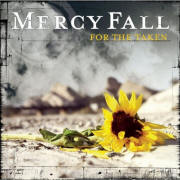 For The Taken is the debut full length album from Flagstaff, Arizona’s alternative heavy rock band, Mercy Fall. Seeing as the forceful opener “Insurmountable” is the album’s generic brash song, it sets things up rather deceivingly for the remainder of the record. This band is fairly new to the music world and with a CD as tight as this, I’m sure you’re gonna be hearing them on the radio very soon.

This CD is so tight in many ways for example, frontman Nate Stone’s vocals are so good that even if you’re not into this kind of music, when you hear this your gonna think to yourself, “wow, this guy can really sing!” The band sounds like a mix of Tool & Sound Garden and in mixing these two bands together, I don’t really think you can go wrong. For The Taken is for sure one of the best rock CDs I’ve heard in a long time.

This Album has the perfect mix of heavy and soft sides. The guitar parts are so catchy and the drums and bass follow the guitar the whole time, giving the music a bit more of a punch to the face feel. The over all sound quality of this CD is so good that you can tell it’s not over produced, but at the same time not under produced. Between 2002 and 2004, Mercy Fall honed their sound and vision, recording a series of demos that eventually led to their signing with Atlantic Records. From there, Mercy Fall headed to Los Angeles, where they spent the spring of 2005 in the studio, with producer Howard Benson recording their first full length album For The Taken.

Tracks like “Hush” and “Here I Am” dance with a wide span of ideas, from the inscrutable interconnectedness of the universe to the opposing forces in nature that define our lives – tension and release, answers and mysteries, and love and fear. “I Got Life,” the album’s razor-riffed first single, is perhaps the definitive Mercy Fall song in its expression of strength through positivism.

This CD For The Taken hit stores worldwide May 9th, 2006 and with a CD like this I’m sure your gonna be seeing and hearing a lot more about this band in the near future. I give this CD an 8.4 out of 10 because the energy & tightness that is has for the kind of music it is, is truly mind blowing.  [ END ]