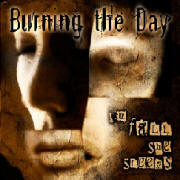 Burning The Day – “In Fall She Sleeps”

Hardcore metal is a genre that can catch attention, or make some people want to throw up, depending on how original the bands are. Nobody wants to hear the same repetitive bullshit over and over again. We’ve seen some hardcore bands such as As I Lay Dying, Unearth, Silent Civilian, and Dead to Fall take to the skies with their original work. A band adding to the Hardcore platform is Burning The Day.

Straight out of Toronto, this band wants to break the rules, and change hardcore forever… and that is exactly what they will do. The band started in 2003 with vocalist Chris Gillespie and drummer Matt Metcaffe. They wrote music for a little while together, and after about a year, guitarist Braden Hoey added his experience, and added some new edge to Burning The Day. They tried bassist after bassist, but they couldn’t find somebody that could keep up with they’re fast-paced hardcore metal… until they finally met bassist Dan Rodbard. He could keep on top of the music, and play with attitude, and after that, Burning The Day was complete!

The first track on the album is “In Fall She Sleeps,” which as you probably noticed is the title of the album. The intro contains some mid level distorted guitar, which can catch the listener’s ear in a matter of moments. I didn’t much care for the chorus of this song for it was too different from the rest of the track. The rest of the song though, is great. Nice sounding solo too.

Next is “Beirut,” my second favourite song of the album. The distortion level on the guitar is excellent and adds some darkness to the track that sends chills throughout the body, and even your ears. With a mixture of power chords and harmonics, the track is extremely well played.

Fourth on the album is “Stand For This.” At first I was like: ‘…sweet….’ The intro is amazing! Braden is palm muting the strings while Matt is playing in perfect tempo along side with him. It’s just great! Chris’s voice also add some distinction and the low growls and screams intensify the track’s dark feel.

Next up on the album is “A Will To Exist,” which by far is my favourite track on the entire record. The intro is unlike anything I’ve ever heard. With a hardcore bass solo at the very front of it, I was like “DUDE!” and cranked the volume on my stereo. It’s a good thing they found Dan… there is no way it would be the same if anybody else played that solo. Braden plays over top of the bass riff and adds a harmonic at the end of the line. Again, I was like *drool.* The track is simply put – AMAZING!

“Frail” is ninth on the album. “Frail” being an acoustic medley is only just over a minute long. It’s still well played though, and soft on the ears… a nice change from the traditional hardcore metal.