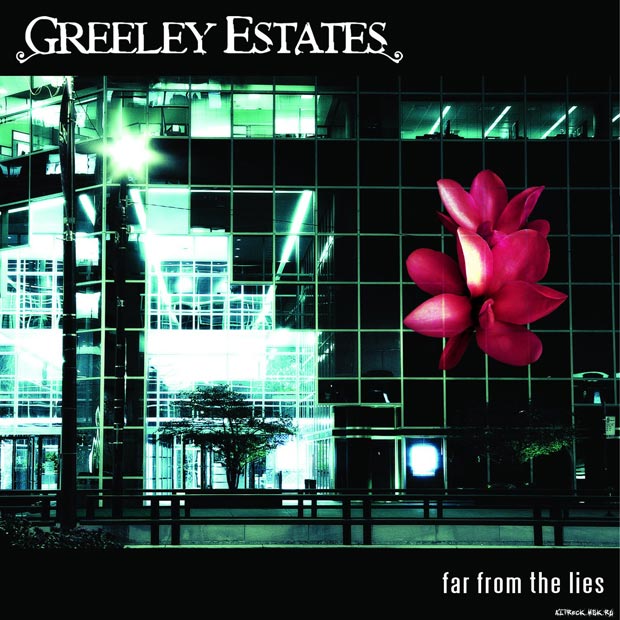 There was a time a while ago when a good friend of mine Ryan from Blythe, CA, told me to check out Greeley Estates… reluctant as I was because Hardcore and Post Hardcore aren’t genres I would likely lend an ear to. But being a music fan I decided to check them out at last years Warped Tour, and must say, I was impressed. I tend to lean towards the melodic bits of a song instead of the screaming bits.

This is a band that sets them apart, maybe not musically, but ethically. With relentless touring and focus, 3 years nonstop to be exact, they have managed to connect with their fans on a whole other level. Sure bands sign a few autographs here and there, but these guys really get down with their fans. And that’s a band that’s going to have fans that will have their back no matter how shitty their 18th album is.

Ok musically, the album covers most aspects hardcore fans have come to love, the heavy guitar riffs, the melodic bits, the screaming bits, and the fast paced, hard hitting drums.

Lyrically, the album is set to inspire, not only fans, but also the band themselves. It gets pretty boring when you hear lyrics such as “life sucks, boo who, wah wah wah.” So when you get a band offering advice I guess you could say, or have a positive note on things, it’s a pleasant change. Definitely lyrically, this band rocks!

Going back musically, and all those aboard the latest trend of screamo/melodic bands may beg to differ, but I think these dudes have talent. With each album they will get better, in my opinion. Their live show was impressive, they aren’t hard on the eyes either, but most importantly they are a band with heart, not only for the music but also for those who support their music.

Personally, if vocalist Ryan Zimmerman just sang, and not screamed, it would make me much more of a fan. In a sense the screaming kind of ruins the songs. And I really don’t care about how much people like screaming, because to each their own.