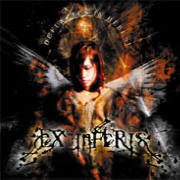 Defunctus In Heresi is an extreme slab of metal. This album starts out with a haunting intro which is both tasteful and disturbing. Your false sense of security is obliterated once Ex Inferis’ melodic brand of metal begins its onslaught. At times, Ex Inferis reminds me of At the Gates with a sick injection of groove. If melodic death is your type of music, these guys will peel the pain off the walls of your mind.

The intro, “Dawn of the Faith Surgeons” is one of the many instrumental pieces on this album. I feel as if the album would flow better and have a greater impact without so many of them. “Blood soaked apostasy” kicks the album into overdrive. The interplay of death metal and black metal vocals work really well with the song’s structure. The wickedness of “Selfmadegod” sounds is it could have came off “The Bleeding” by Cannibal Corpse. The beginning of this song lurks towards the dual guitar attack that assaults the senses.

“Stabbed by the cross” is next. This song pummels the ears like a firing squad, ripping holes from every corner. The exit wounds lead to to a double bass show of force complete with some haunting clean vocals. “Delusions of a derelict mind” showcases the strong points of this band. There’s technical yet tasteful guitar work, skillful drum and bass interplay and vocals that range from screaming to grunting to chanting. The diabolical invocation that is “Seek no salvation“ is enough to turn anyone away from the light.

Ex Inferis is a great band with a lot of potential. It is too band that they filled their album with so many instrumental tracks. However don’t let this dissuade you from picking up this album! These guys have what it takes to make it in these days of the over saturated and bloated metal scene. They mix the best qualities of different genres without dwelling in the low points. Defunctus In Heresi could stand with the best of today’s metalcore scene and obliterate quite a few of the competitors. Give Ex Inferis the chance to enchant you.  [ END ]

01. Dawn of the Faith Surgeons
02. Bloodsoaked Apostasy
03. Adonai
04. Selfmadegod
05. From Twilight Came Torment
06. Stabbed By The Cross
07. Embers of Eight
08. Delusions of a Derelict Mind
09. Chants From The Beyond
10. Seek No Salvation
11. …of Innocence And Vultures
12. Defunctus in Heresi