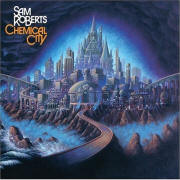 Since his 2003 full-length debut We Were Born in a Flame, no one’s heard much from Montreal native Sam Roberts… but perhaps with good reason. His sophomore effort, Chemical City, has been well worth the 3 year wait. The entire album is veritably magnificent. Each song is distinct, melodic, and perfectly orchestrated. With Chemical City¸ Roberts presents a slightly more mature sound, but manages to hold on to the vivacity and exuberance that made We Were Born in a Flame so good as well.

“The Gate” has an easy, breezy feel about it, making it a perfect album-opener and lead single. It’s by no means the best song of the album, but it has a lovely sing-along quality about it which lends it a nice, summery tone. It’s with the second track, “Bridge to Nowhere”, that Chemical City really hits its stride however. It has a slight melancholy about it, as all good things do, and a soaring chorus that’s completely fulfilling to the listener. And next comes “With a Bullet”, a song which is perhaps even better than its impossibly good predecessor. “With a Bullet” is a bit incoherent lyrically, but the driving force of this song is so magnificent that one tends to not care about what he’s saying much, but rather concentrates on the feeling of flying one gets when listening. Brilliant, truly.

“Mind Flood” doesn’t live up to some of the previous tracks, but remains passable and enjoyable all the same. Next is “Uprising Down Under” (which is perhaps a reference to the fact that Roberts and his band recorded Chemical City in Australia?), a glorious and simple love song that tugs on even the most hardened heartstrings. Roberts’ vocal performance on “Uprising Down Under” is unparalleled by any other song he’s ever sung, and lyrically he somehow manages to write a love song that isn’t soppy or trite. Bravo on this one Mr. Roberts, it’s one of your best yet.

With an extremely earthy, atmospheric vibe, “Mystified, Heavy” nods along in a beautiful yet strong way. This is a gem of a song, though I warn it may take a few listens to really get into. Nonetheless, it’s not to be missed. Which brings me to the complicated-title-song, “An American Draft Dodger in Thunder Bay”. I don’t like the title of this song. At all! But as for the actual tune, it’s fucking great. It has one of the best choruses on Chemical City, and I could see a future for it as a radio single (if it didn’t have such a silly name).

“The Bootleg Saint” and “The Resistance” are the weakest songs of the album. Both songs remain listenable, but fortunately they’re grouped together so I generally skip them to get to the final track, “A Stone Would Cry Out”. Melancholic and sad, Roberts has composed a formidable ballad with “A Stone Would Cry Out”… and one that acts as a fantastic album closer at that.

Overall, Chemical City is brilliant from start to finish. With this album, Sam Roberts has fully established a place in the Canadian (and international) music scene. The songs are all amazingly well crafted, superbly executed and extremely listenable. I highly, highly recommend Chemical City, and think it could be a top contender for 2006.  [ END ]