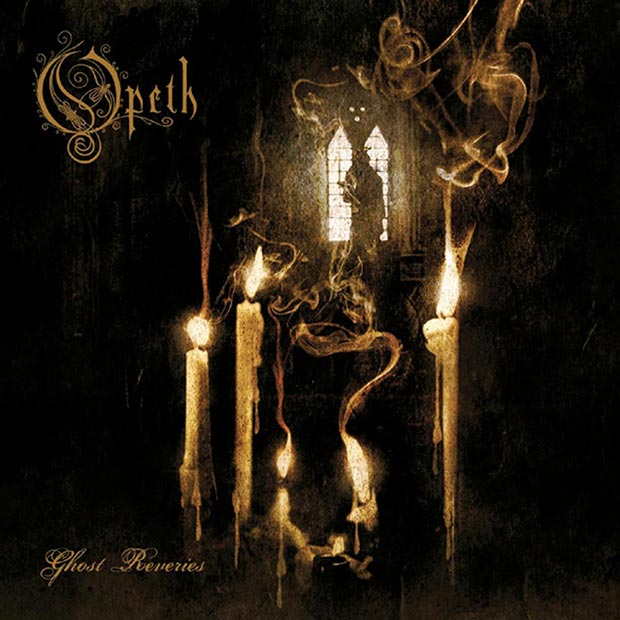 I’ve had the Ghost Reveries CD sitting beside my stereo since mid-December, and yet I’m only writing the review now. And it’s not even ‘cause I was slacking – I’ve actually been doing a lot of work lately! It’s just that it’s taken me that long to get into the Opeth mood. Or, so I thought. Here’s what actually went down….

When I got the CD, I immediately threw it in my CD player in my car (actually a discman with one of those things you plug into the tape deck of your car… Don’t judge me.) I was feeling pretty upbeat at the time – I think I’d just finished listening to some City and Colour, or something else along those lines. Very… not Opeth. Anyway, I listened to about half of the first song, “Ghosts of Perdition”, heard singer Mikael Akerfeldt’s vocals on the track – which I could only describe as a spine-chilling growl – and said to myself, “nope, you are definitely NOT in the mood for this CD. Just wait ‘til you’re pissed.” I left it beside my stereo when I got home and it’s been there up until about a week ago, when a minor peewee hockey game left me fuming. Yep… “Time for Opeth.”

I don’t even know what I was thinking… I saw the band play at Sounds of the Underground in 2005. I know they’re awesome. I know I love their sound. What would possess me to put off listening to their CD? I don’t even… ugh. Forget it.

Like I was saying, the album opens with “Ghosts of Perdition”, which is a mind-boggling 10 minutes & 29 seconds of wicked guitar riffs, incredible lyrics, and vocals ranging from the aforementioned “spine-chilling growl”, to almost mystical-sounding sopranos, and everything in between. And this carries on through the entire CD. The album worked wonders on my post-game fury, one minute pumping me up until I was about ready to kill the next person who pissed me off, the next minute calming me down to the point that I’d entirely forgotten what I’d been mad about in the first place. Amazing!

Okay, so maybe the anger issue needs a little work. And if you have serious rage control problems, there’s definitely some tracks you’re gonna want to skip over – for the sake of those around you. But aside from that… in my opinion, this album is virtually flawless. The only problem I found with it, was when it ended.

The guitar? Incredible. For the most part, it consists of two things – loudness and distortion. That’s to be expected for a band of this genre. But then, there are little subtleties throughout the album that keep it from all sounding the same (which is one objection that I usually have with metal albums). The guitar on the track “Atonement”, for example, has a middle-Eastern-esque vibe, which I thought was very cool. Alternatively, “Hours of Wealth” has a very bluesy feel to it. Again, very cool and very unexpected.

And then, there are the lyrics – the words themselves, as well as how they’re portrayed musically. Each song is a story unto itself, and yet when all the songs come together to form the album, it tells an even greater story. A story of loss, fear, and desperation. A story not only present in the lyrics themselves, but also in the vocals. Akerfeldt’s voice haunts me long after the last song is over, and I’m not objecting in the least. Although I’m still baffled as to how such a huge range can come from a single person. I’ve decided… he’s not even human. He’s a God. That explains everything.

If you’ve never really listened to Opeth, you might soon find yourself in HMV or wherever it is you go, looking at the back of the CD and saying to yourself, “Only eight tracks? Hardly worth my money.” DO NOT, by any means, let that happen. Seriously. You could pick a CD with 15 sub-par songs over Ghost Reverie’s “measly” eight (half of which are over 10 minutes long, by the way…) – but that wouldn’t be too smart of you, now would it? No, no it wouldn’t. Aren’t you glad I’m here to talk you out of doing something crazy, like passing this album up? No need to thank me – a cash donation to show appreciation will do just fine….  [ END ]