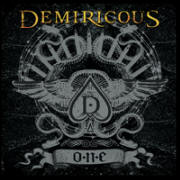 One (Hellbound) is the 2006 Metal Blade Records (Universal) debut album of Indianapolis Death/Thrash Metal band Demiricous. Thankfully, PureGrainAudio was able to obtain a ‘copy protected’ (it will not play on computers, and some portable CD players – of course, the actual release will) pre-release of this album for review prior to the US release date on January 24, 2006.

The band will be touring throughout the US and Canada in February, March, and April of 2006. They are currently a three-piece band with a bassist/vocalist, and two guitarists. Whether they plan to add a permanent drummer to the lineup, or stick with session players is unknown.

Demiricous is given 4 out of 5 for the music on the 40 minute One (Hellbound). The music has a very US sounding Death/Thrash style, more similar to Pantera, Zakk Wylde, and other US bands than to their European counterparts.

All twelve songs are heavy, fun to listen to, and very energetic. There are no breaks in the heaviness of this album, each song is followed and preceded by one just as heavy. Although this may sound like a boring idea, Demiricous has made it work very well. There is just enough variation between the songs to keep the listener interested, but not so much that the album loses unity. Well placed changes/breakdowns/solos in songs, constantly changing drum lines, and well-written riffs, all help to keep the listener entertained.

As with most albums of this genre One (Hellbound) is nothing particularly innovate or different. Nevertheless, it stands apart from the rest because of the superb quality of the songs. Demiricous have a firm understanding of the genre in which they are a part.

For considerations specific to the band, Demiricous and One (Hellbound) receive 1 ½ out of 2. To release a debut album of this quality is very promising for the band. To have released it as a three-piece band is also very impressive. The music of One (Hellbound) will undoubtedly be effective when performed live. Giant circle pits and violent moshing will occur during their sets for as long as the audience can keep up.

The album makes one wonder however, what’s next? Whatever Demiricous plans to do for their next album it will have to be very well thought out. If the follow up album is not as heavy as One (Hellbound) the band will disappoint its fans and lose credibility. If, however, the album is as heavy as the first it risks becoming a boring repetition of the same music. Demiricous will have to be especially careful when writing and recording their next album to ensure that they do not become a one-album wonder in the metal community.

The sound quality of this album gets 2 out of 2. There are no noticeable problems with the timbres or tones on One (Hellbound). The guitar tone is a great heavy crunch, except during the solos where an impressive wailing tone is used. All the instruments and vocals seem to be well mixed and leveled.

There is no ‘physical attributes’ mark in this review because the CD had none. Being a pre-release promotional copy protected disc, there was no accompanying insert, artwork, or CD design (black font with a standard text was used on a plain white CD). Since this is not the same physically as the CD that will be released, this mark will be omitted and the final mark will be an average of the other criteria’s.

With a final rating of 8.5 out of 10 (from 7.5 out of 9), One (Hellbound) is an album worth buying. The songs are well written and fun to listen to. Demiricous is a band to keep an eye on, and definitely to check out live. Anyone who likes American Death/Thrash Metal will appreciate this no-nonsense album when it is released.  [ END ]