Norsemen of the world, unite! It is time to celebrate the release of Nordic Daughter’s brand new single “Forgotten,” the first song featured on the band’s new record Perception. This is a unique ensemble performing their own style of music, which they refer to as violin Viking alternative folk. This album has been in the works for some time and is now ready to drop, an exciting time for the band, considering that it has been over four years since the release of their sophomore LP, The Path. It’s not like the band members haven’t been busy in that time; they released three singles in 2020 and are already working on their fourth studio record Nordic Sun, which will see them adopt more of a tribal approach to their songwriting.

Nordic Daughter have adopted a pretty exceptional approach to their music in terms of their purpose and reason for doing it. Their primary focus is to tour the world and help educate young people on how useful music is as an outlet for their self-expression. This drives the band’s interest in playing large benefit concerts, with a real communal approach to performing where they like to get the whole audience involved in the proceedings. Their music is genuine and authentic, and it has created a close bond between them and their audience, which has certainly been aided by the talents, power, and charisma of lead singer Melissa Lycan.

We recently conducted an UnCovered interview with Lycan in which we discussed the artwork for the new Nordic Daughter album Perceptions, the meaning behind the cover art, the band’s relationship with the artist Steven Olsen, and how the art relates with the songs on the record.

Melissa Lycan: “The graphics were done by our friend and fan, Steven Olsen. He is super cool; he even did some tour jackets for a few A-list rock acts back in the day! We asked Steve to create a three-eyed raven and to put the last album art in the third eye. I sent the last album cover over to him, and he was able to create such a realistic image.”

Please help us understand what you are trying to convey with the cover’s imagery. Give us details on the concept.

“The raven is a symbol of change in Norse mythology; they are the harbingers. Our perceptions of moments in time can make or break our understanding of any situation, and as we have grown and learned from our mistakes, we come to recognize that some people don’t have all the information. Shifting our perspectives to gain a greater understanding is integral to achieving enlightenment.”

Did Steven get a chance to listen to any of the music before creating the artwork?

“Oh yes! Steve has been attending our shows for some time now. He usually comes in full chainmail, bracers, and furs. In fact, this year, he dressed as Odin for our Jul event in December. He is a great friend; we have broken bread many times. He asked if he could help with the artwork, and he took the time to thoughtfully put together a realistic three-eyed raven. I usually do all of the artwork for our albums because I am also an artist.”

What are some of your favourite covers of all time?

“…and Justice for All by Metallica is (guitarist) Jason’s (Lycan) favourite cover; it’s a perfect representation of the irony of the title. A sketch of lady justice with the scales of justice breaking under the weight of the almighty dollar. Epic concept for an album title. I was always drawn to the album cover for Fire of Unknown Origin by Blue Oyster Cult. This album happened to be in my dad’s vinyl collection, and I listened to it for months on repeat. It was just an eye-catching album cover in the blue tones of the original print.”

If you could picture your album in the hands of someone you would be amazed to see holding it, who do you picture?

“Oprah, Trevor Noah, or Barack Obama, The Dahli Lama, the Pope or really any spiritual elder that speaks truth into the world. I want to align myself with people that choose people, equity, and love over profit, selfishness, and fear. I believe the world needs continued healing from the generations of trauma that persist within the poorest communities, soaking into the young in the form of apathy and helpless entitlement.”

Where would you be most excited to see your album artwork posted or displayed?

“It would be amazing if we actually were picked up for major distribution. I would be super happy to see our posters up at Red Rocks for a performance. Rolling Stone Magazine… A girl can dream, right?! Any online music platforms promoting the music would be incredible. Features on national news as we expand our music program would cross genres and build bridges with our message of ‘Unity… We Are One after all!’”

Would you consider Jason an additional band member or someone contracted for just this piece?

“I would consider Steve a part of our band family. He has been one of our biggest supporters for years. I can’t begin to thank him for all of the love and friendship he and his wife, Maureen, have given to us. Truly a blessing to have them and their daughter in our lives.”

“The album artwork is important because it provides an initial visual connection with the fan and can inspire them to listen if the art is cool enough. Drawing a fan in with the art is as important as hooking them with the music in the first 30 seconds of a song. We experience life through multiple senses, and vision is one many of us take for granted when thinking about sound. A website, flyer, or piece of artwork can market the music more effectively than words alone.”

“Definitely! The music is always exploring the inner workings of our minds and how we handle ourselves and experience it. Perceptions is all about listening to yourself and following intuitive signs from the universe. When we are riding the wave of existence and are purpose-driven, things start to happen naturally. We must live in a space of love, acceptance, and responsibility to each other to communicate and educate, to help people grow and understand, to forgive and let go.”

Is the art related to any of your previous albums’ cover artwork?

“The third eye of the raven shows the cover art for the previous album, The Path, which is meant to resonate with the entire concept of how we perceive our world through a deeper connection with energy over time, often revisiting our past to further understand the role we play in our future. Our lives are like onions growing from the inside out; the earliest traumas are the most outward-presenting layers of our interactions with the world. Peel it back, work it out, and keep showing the best parts of yourself too.” 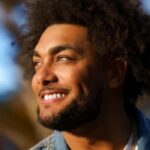 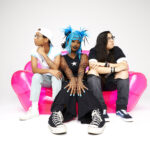 Meet Me @ The Altar, Photo © Jonathon Weiner
Next Post