When the Kenny Wayne Shepherd Band released their first album, Trouble Is, in 1996, there was little idea that it would go on to hit platinum and allow its namesake guitarist and musician to become the forerunner of a new generation of blues rock figures. To mark the occasion of that album’s 25th anniversary, the band reassembled to play a packed house at The Strand Theatre in Shepherd’s hometown, Shreveport, Louisiana. The documentary is a mix of talking heads and archival footage. All of this is interspersed with excerpts of their live anniversary show, serving as a demonstration of the power and vitality the band still commands.

Providing insights into some of the song lyrics and Shepherd’s intended purpose for them is one of the key highlights of the documentary. At one point, the film focuses on his songwriting. By way of explaining why he insisted on having other musicians get involved in the process, Kenny states he wanted to add them because “if somebody thought it was horrible, it wouldn’t be all [his] fault.” What appears on the surface to be a remark made out of modesty ends up illuminating how collaboration helped Kenny grow as a musician, moving on to cover his collaboration with artists Mark Selby and Andrew Tate.

By the time Tia Sillers and how her influence on the album is introduced, there’s a compelling story shared about how the chain of musicians working behind the scenes in that blues community networked and ended up contributing to the debut’s various singles. In addition, getting Jerry Harrison (of Talking Heads fame) to reveal his thoughts on producing Trouble Is… is a level of insight that’s as unexpected as it is welcome.

One other thing that the documentary is helpful for is showing the unusual dynamic between Kenny and his father, Ken Shepherd, who went from being a radio DJ to become his son’s manager. It’s fascinating to see the way that they reminisce on the way that their careers and relationship interacted, and for others to remark on it serves as a reminder that it is as unusual as it appears to have been beneficial for the team.

Documentaries have the difficult task of making the subject matter interesting to audiences, whether or not they’re already familiar with the material. One thing Trouble Is…25 fails to do is put Shepherd’s career in the context of what the state of blues was like when his debut album dropped. There are loads of artists breaking ground in the blues rock scene today (we reviewed Andrew Adkins’ Rattlesnake Motions just a few months ago, by way of example), and having that general survey of the landscape at then and now would have been a welcome bonus to the film. With that said, the documentary does a fine job of playing well to its niche. So while the genre of blues and its vanguard of artists aren’t explored, it’s not necessarily vital: the film is just as interesting for audiences who may be unfamiliar with either Kenny Wayne Shepherd or blues rock in general.

The Trouble Is… 25 Documentary and Concert Film DVDs are both available on DVD and Blu-Ray, and the audio album of the performance is available wherever you happen to stream your music. Find all purchase/stream options here. 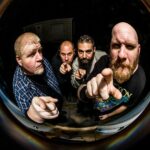