Wilmington, NC heavy rock road dogs He Is Legend are readying to unleash to the world their 7th studio album, Endless Hallway, via Spinefarm Records, taking its name from a lyric from “Eastern Locust” off their 5th album, few. They continue discovering and reinventing themselves, a theme that has been a rollercoaster of riffs, emotion and signature sounds throughout the band’s discography. Faced with adversities that most artists saw at the onset of 2020’s global pandemic, all momentum from previously released opus White Bat was stopped dead in its tracks. Hoping to rebound and pick up right where they left off, HIL has been hard at work with a 12-song rager that should provide the success this group truly deserves.

Already released songs “The Prowler,” “Lifeless Lemonade,” “Honey From the Hive,” and “Sour” have taken their fanbase by storm, creating a much-anticipated buzz around Endless Hallway’s release. “Return to the Garden” provides the catchy hooks that all HIL fans crave. Singer Schuylar Croom’s raspy vocals are on full display on the aforementioned track, taking the listener through a labyrinth of stylings. Providing old-school fans with some glimpses back to some of HIL’s heavier side, “Circus Circus” showcases Adam Tanbouz’s unmistakable tone. Groovy and technical, this track is an easy contender for making the setlist when Endless Hallway’s touring cycle begins.

Deeper cuts “Time’s Fake” and “Sink Hole” provide more of the clear recipe for Endless Hallway, being hooks and riffs. But don’t overlook Jesse Shelley’s work behind the kit here, who, as the newest member of HIL, has fit perfectly with the already established members’ talents and styles. The drums throughout the record are a variety of off-beat and perfectly timed playing that only amplifies the album’s other instrumentation, including Schuylar’s range of notes.

Overall, Endless Hallway is a solid addition to He Is Legend’s growing catalogue. The band has already announced some touring centred around the album’s release. Be sure to catch these guys when near a city near you. As with the trajectory of their releases, the live show is also on an upward trend, always seemingly getting better with age. Closer “Lord Slug” ends the album with head-bobbing riffs, and screams mixed with clean vocals, and serves as the catharsis of the message they are delivering with this release. He Is Legend is here to stay! 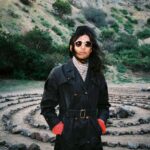 Behind the Video: Imaad Wasif Discusses His Chilled-Out Clip for “So Long Mr. Fear” 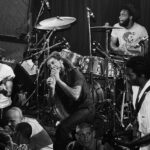