Considering the plethora of talent and household names with whom Stu Brooks has collaborated, it would be a tall task for anyone to match this level of career success. Brooks, the co-founder and bassist of the dub and rock crossover group Dub Trio, is returning with his latest collection of songs, The 40HZ EP, due out on December 8th via Dine Alone Records. The five-track release features a host of collaborators, including Patrick Stump, Angelo Moore, Jason Aalon Butler, Paul Leary, and N8NOFACE.

Collaborations are what Brooks does best. Looking back on his career, he has worked with a plethora of talent and notoriety, including Lady Gaga, Danny Elfman, Lauryn Hill, 50 Cent, Mary J. Blige, Mike Patton, and Slick Rick. This year, he spent some time co-writing with Perry Farrell and Fever333. Let’s not forget the production work he has done alongside rock music legends, such as Trent Reznor and Iggy Pop…

There’s almost no one better to talk music tech with than Brooks himself, so we caught up for a gear-focused interview, in which we discussed the Pulsar-23, what he most values about it, but he also touches on the steep learning curve that goes along with it…

Stu Brooks: “I think my signature sound is constantly evolving and morphing. I used to say LaBella Flatwound bass strings (Jamerson Set) were a huge part of my sonic identity. But for this record that I’m working on now, I think I’ve gotta say the Pulsar-23, a drum synth by Soma Laboratories, is the sound of this record. And I’m so in love with it.”

How did you come to possess the Pulsar-23? Vintage shop, regular shop, borrowed money, gifted. Give us the details.

“Well, I obsess over gear, and my wife pays close attention. So, when my birthday came around in 2021, she surprised me with it. At the time, they were in short supply because of supply chain issues, so she bought from a boutique shop in Brussels. I think they had the only one left at the time.”

What made you choose the Pulsar-23, and were there any close seconds or alternates?

“I demoed it over at Perfect Circut in Burbank, my favourite shop and source of inspiration gear-wise. As soon as I touched it, I was sold. It was like instant Autechre vibes. I was so excited about it; I had to have it.

“A close second? I’d say the Deckards Dream MKII by Black Corporation. It’s basically a clone of the Yamaha CS-80. It was given to me by Eric Wilson of Sublime, who is also a constant source of inspiration to me. His love of music and gear is something we share and geek out on all the time.”

What about the Pulsar-23 makes it so important to you?

“It helped me burst into creative mode. The unit alone sounds like a finished record that I want to listen to. I was able to bang out so many ideas that I still love. It’s grimy, a bit noisy, industrial vibes a bit, and has a very easy-to-dub out work flow.”

We know you love the Pulsar-23, but are there any major cons? (Ok, now you can also list the pros.)

“I’d say the learning curve is steep. There aren’t any menus or screens, and there is no real quantization function. And some of the tutorials are even more confusing. The guy that designed it is Vlad Kreimer, a radio engineer, and a musician from Ukraine/Russia. He’s a genius on another plane.

“My friend (the great drummer) Matt Chamberlain hipped me to using it with an Arturia Beat Step Pro, which works great and helps getting a quantized beat. There are cons to using the Beatstep Pro, as it changes the range of ASDR a bit. It’s such a deep piece of gear that I’ve barely scratched the surface of its capabilities, but I have gained so much from it already.”

If you could or wanted to (maybe you don’t at all, and that’s cool), what would you tweak or mod on the Pulsar-23?

“I mean, a quantize function could be great!”

“Super easy! Some of the instrumental sides of the songs on my record were made in a matter of a couple of hours. It’s so fun!”

How does the Pulsar-23 hold up with regular touring and gigging?

“I think it would be sick to bring it out on tour. But I have not decided to do that as of yet.”

“I will eventually buy a backup or just throw two of them together. That would be pretty sick, actually.”

“Oh, man. The first thing that comes to mind is day one of Peeping Tom tour in Dallas. The airport taxi driver, who was taking us to the venue, didn’t close the trunk of his SUV properly. We were on the highway, and I heard the trunk pop open and saw my vintage Roland Space Echo fall out the back of the car and bounce down the highway. That was traumatizing! It was fine, though. Which is crazy.”

Any final thoughts or comments on the Pulsar-23?

“Full disclosure, I was stressing pretty bad about the making of this record before I knew what it was going to sound like. It is my first solo record, and I carried a lot of emotional baggage with that pretense. I eventually decided that I needed to develop a sound palette for the album. When I found the Pulsar-23, I knew this would be central in the sound of my record and gave me so much inspiration and creative satisfaction that it came easy to me to write half this record with it.” 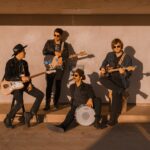 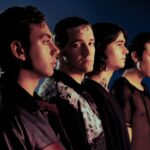 Quarters of Change, photo by Zachary Olewnicki
Next Post