London, Ontario, has few claims to fame. It was the subject of one of Tom Segura’s stand-up bits. It has the most Arby’s locations of any city in the country (four). And now, perhaps most eminently, it is the hometown of one of the most exciting punk bands to emerge in the post-Covid world: MMVLL CRIMES (pronounced “Mall,” ’kay?).

Pinpointing exactly what sets MVLL CRIMES head and shoulders above the rest of the indie musical landscape, especially in the flooded market that is punk and noise these days, isn’t immediately easy. Are they the heaviest? The craziest? The loudest? The most political? The hardest working? Maybe that last one, considering the absolute boatload of shows they’ve played across Southern Ontario this year so far. But for my money, it’s the melding of snot-nosed energy, outrageous lyrical takes, and rafter-high riffs that take it to the next level.

Vocalist Jill (I do not have their last name, sue me) has an uncanny ability to parse the types of topics that feel current and timeless at the same time. All of that would be fine, but it’s their ability to then deliver them in ways that summon up Ian MacKaye, Joan Jett and Karen O, albeit with far more heat as befitting contemporary noise punk artists, that separates them above the rest of the pack. On the other hand, the guitar work rockets to the ceiling, filling any space and then some, cataclysm piled on cataclysm, progressing from power chords to toxic contagion, spreading out into every nook and cranny until the feedback finally wanes and the listener can get ready for the next journey.

Take “Foods I Don’t Eat”: on paper, it’s a pro-veg pander, but MVLL CRIMES takes what should be a silly filler track and somehow manages to make something great from it. The listing off of foods begins just as awkwardly as one would expect, but then the rhythm section slides into step, the guitar drives off a cliff, and suddenly the listener is in a ferocious freefall. By the end of the song, the sonic violence rivals anything found in a slaughterhouse. But the group doesn’t take themselves so seriously: a little tongue-in-cheek throwaway line, “the iron in my blood is so low,” at the end is a self-aware jibe that acknowledges the shortcomings of the message. In fact, it’s that feeling of futility that grounds the record, taking it away from preaching and giving it a far more self-aware vibe.

At just under 17 minutes, YOU EMBRVASS ME is more than enough material to display a wide variety of the band’s abilities but not long enough to call it a debut full-length. Instead, treat it as the appetizer it stands. For those who long for snotty punk coupled with dissonant guitars and driving rhythm, this is the first stop for you.

YOU EMBVRRVSS ME Track Listing: 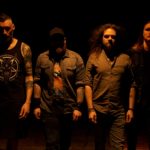 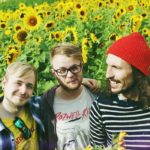