Paramount+ has unveiled the new “Coming Out of the Dark” music video lifted from the forthcoming film Monster High: The Movie during their Virtual Television Critics Association Presentation. The new clip features Clawdeen Wolf arriving at Monster High alongside all of the other students.

Monster High: The Movie follows Clawdeen Wolf (Miia Harris, Just Beyond), who was born half human and half werewolf, after she arrives at her new school, Monster High. She quickly makes friends with her classmates Frankie Stein (Ceci Balagot, Dispatches from Elsewhere) and Draculaura (Nayah Damasen, Grey’s Anatomy), and for the first time in her life, Clawdeen feels like she has finally found a place where she fits in and can truly be herself, despite keeping her human half a secret. When a devious plan to destroy Monster High threatens to reveal her real identity, Clawdeen must learn to embrace her true monster heart and find a way to save the day. 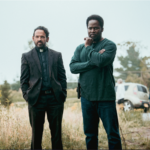