The traditional method of making a name for yourself in the music industry may work for some, but there are many other modes of finding your way to where you want to go. Take TheFatRat, for example, a man who is now known as a gaming music icon with nearly six million YouTube subscribers. He is synonymous with and highly regarded for having his music sync-to-screen for many popular video games, like Dota 2 and Rocket League. A German producer, TheFatRat has become the go-to musician for video games, technology, and gaming culture. All of this has helped earn him this massive online following and a grand reputation as a real online influencer.

Despite all of his projects and different ventures, TheFatRat found time to finally record his debut album, PARALLAX. In line with his progressive approach to music and media, he has made every song on the album free to use on social media for creators. It remains true to his tradition of always making his music freely available in an effort to be free, transparent, and to inspire content creators and empower them in their own passion projects. It’s a progressive approach that is paying off, to say the least.

To get to know TheFatRat more as a musician and as a songwriter, he joins us today for a new Stereo Six in which he serves up six of his favourite all-time songs, which, as expected, come from a wide range of different genres and styles.

“It gave me the idea of how melodic, catchy and uplifting an electronic, mostly instrumental song could sound. Inspired by that, I spent hundreds of hours just playing around with melodies and their interaction with chords.”

“Simply one of the best electronic songs I’ve heard the last couple of years.”

“Such a great energy in that song. It was also the one that got me into glitch hop, which laid the foundation for my career. Basically, what I tried is to combine strong melodies like Avicii’s with the groove and the energy of ‘Fire In The Hole.’ Based on that idea, I ended up creating some of my most successful songs like ‘Unity’ and ‘Monody.’ On PARALLAX, you can hear those influences on ‘Arcadia’ and ‘Fire.’”

“The creativity and precision in John Williams’ orchestral arrangements fascinate me more and more each time I listen to his work. Funnily, it’s one of my favourite pieces of music to blast at full volume in the studio.”

“This is a dance song from the year 2000. It was the first time I heard a Koto sound used in a dance music track, and I’ve been in love with that concept ever since. My song ‘Upwind’ on PARALLAX is heavily influenced by that.”

“I’ve been a fan of Queen since my childhood. What inspires me most these days is how they made music that is easy to understand on the surface, but very complex when you get deeper into it. This creates an emotional density which is hard to achieve otherwise. One of my songs that lives from this is the last song on my album, Let Love Win. The melody and the chords may seem straightforward at first listen, but the songs only work through the complexity of the string arrangement in the background.” 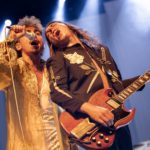