South Florida-based indie rock/indie-pop outfit The Dan Gootner Band recently released their new single, “The Fox and the Hound,” a song about star-crossed lovers whose families can’t accept the relationship.

Conjuring up suggestions of The Allman Brothers with its flowing layers of shimmering Southern rock flavors, “The Fox and the Hound” features a sparkling piano, deliciously haunting guitars, and an alluring rhythm composed of tight percussion and a wonderful, walking bassline.

V13 spoke with the band’s two core members, Dan Gootner and Elie Ganz, to discover more about their new single, how they got started in music and their songwriting process.

What inspired your new single, “The Fox and the Hound?”

Elie Ganz: “It’s a broken world we live in, where people judge and dismiss others based on differences. But children are pure. They just love. This is a song about two children who meet when they’re young, and they become friends. They eventually fall in love with one another. And all this time, their families are fighting this friendship, this love. Because in this world, this often sad and broken world, love doesn’t always win.”

Who is in the Dan Gootner Band, and which instrument do they play?

Dan Gootner: “Elie and I are the two permanent members of the band. Elie is the vocalist, and I play acoustic and electric guitar, lap steel, dobro, ukulele, sitar, and harmonica. Besides us, we have a rotating lineup of super talented musicians; we’re very lucky.”

Gootner: “I’ve been playing guitar since I was about 15. I’ve loved music from as early as I can remember with bands like ZZ Top, The Beatles, Fleetwood Mac, and the Steve Miller Band. And I always thought the guitar was the coolest thing ever, so when my parents asked me what instrument I wanted to pick up, the guitar was the clear choice. From that moment till now, music has been all I want to do with my life and has completely consumed me.”

Where are you from?

Gootner: “South Florida born and raised! Currently, I reside in Boynton, and Elie is in Hollywood.”

Did your hometown impact your sound?

Gootner: “It’s funny. I had never really considered this until someone else asked me a few months ago. I figure it has to have impacted me on some level. Maybe ‘Grand Turk Love Song’ would not exist if it wasn’t for me being a South Florida Scuba Diver! I also think the people have impacted my sound, more so than the surroundings. There are so many amazing artists down here that I have learned from, and it’s made me a much better songwriter and performer.”

Which singers/musicians influenced your sound?

Gootner: “We’re a little all over the place, but for ‘The Fox And The Hound,’ I’d say, Bob Dylan, Monsters of Folk, and Tom Petty. Some of our other material can be more varied, like ‘Doom and Gloom,’ for example, being a more bluesy number, our influences there are more like Clapton, Steve Miller, and Buddy Guy.”

If you had to explain your sound to the uninitiated, what would you say?

Gootner: “I’d say I hope you’re ready for a journey across many genres! We haven’t stuck to one sound and write and record whatever we feel like. That’s part of the fun of this band. We can write something folky or country, something bluesy, more alternative rock like Incubus, and soon we have a funk instrumental coming out with a big horn section, unlike anything we’ve done yet. So there’s definitely something for everyone.”

Did your sound evolve naturally, or did you deliberately push it in a certain direction?

Gootner: “It’s definitely evolved naturally. If anything is being pushed, it’s us being pushed by unknown forces towards new and unexpected inspiration. The way we were just saying we bounce from genre to genre, I don’t think we sit down and say, ‘OK, today we need to write a country song or a rock song.’ It’s just whatever comes to us.  Although with ‘The Fox And The Hound,’ I do think our sound has been refined a little, it’s a good representation of us, and if we were to ever deliberately focus on a direction, that’s a good representation of where we’d be headed.”

What inspires your writing? Do you draw inspiration from poems, music, or other media?

Ganz: “We try to keep ourselves pretty open to anything that inspires us. The greatest songwriters are sponges, drawing from anything and everything. Current events, personal stories, myths, and stories that may not have happened, but are still very true.”

Gootner: “It starts on an acoustic guitar. I think that’s the best place for me to write. If a song can hold its own with just the chords on an acoustic, it’s a good song. Once I have a decent framework, I share it with Elie. This is my favorite part! Because he’ll literally sit down at the table with pen and paper while I just loop the music I wrote, and lyrics flow right out lickety-split. ‘The Fox And The Hound,’ for example, these characters, the boy and the girl, and their families, just spill onto the paper with their whole story. And once the vocals are in place, I go back and write any additional instrumentation, whether it be a banjo or piano part like ‘The Fox And The Hound,’ or whatever else. Depending on the instrument I’m hearing for a song, that’s when we bring in someone new to the mix.”

Which artists, in your opinion, are killing it right now?

Gootner: “Our friends in Tasty Vibrations are killing it right now! They just announced a tour, and we’re really excited for them.”

What can your fans look forward to over the next six months? New material? Live gigs?

Ganz: “We have a lot of new material in the works. ‘The Fox And The Hound’ is the first of many singles on the way. And there will be shows in the Fall, which we will announce on our social media when the time comes.” 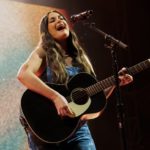 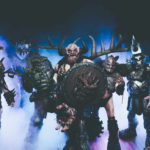