Dimestore Dolls are wasting no time in giving you your “fix” with their debut single “You Are the Fix,” an infectious, and groovy introduction to the band’s unique indie sound. This is a special song for so many reasons, among the most significant being that it was co-written by Dolls frontwoman Kelly Buchanan and her close friend, the late great Adam Schlesinger of Fountains of Wayne. While Schlesinger passed away a couple of years ago due to complications stemming from COVID-19, Buchanan went to great lengths to ensure that this song was a memorable farewell, with all remaining Fountains of Wayne members featured on the track. “You Are the Fix” will be featured on Dimestore Dolls’ debut album Wooly Mamas, which will be released this month.

Buchanan herself has gone through some very hard times to get back to where she is now, creating and producing some of the best music of her career. In 2008, she suffered a devastating brain injury when a slapshot struck her in the head during a game of street hockey. She had to relearn how to walk, work tirelessly on improving her speech, and also how to become a functional member of society again. Through much hard work, she is back and better than ever, singing and playing multiple instruments, and ready to take on her next creative challenge.

For our latest Behind the Video interview, with spoke with Buchanan about the half-live, half-animated music video for “You Are the Fix,” how it came together, who she worked with, and the video concept.

Any concepts where you started and, midway through thought, “what the fuck are we doing?”

Kelly Buchanan: “Yes, quite a few. Initially, we planned that Jody (Porter) would come to Lancaster and walk around the town with us and do a sort of comedy parody video. But Jody decided he prefers to be remembered as he looked when he was younger. When he announced this, we literally considered shooting the same storyboard with a cardboard cut-out of him, the idea of shifting to a plan B at the eleventh hour was just so daunting.”

“Very important. As a music teacher, I use YouTube to look up and learn songs with my students. I realize that if a video is compelling, a listener will sit through your entire song instead of dialing out after seven seconds (is that our current attention span?)”

“Sadly, I was prohibited from watching television growing up and I thus missed out on music video culture, as well as on a lot of pop culture. Kids in my middle school all seemed to speak a different language, as they quoted all the popular television shows and I had no idea what on earth they were talking about.

“On the flip side, this drove me to spend a lot of time with my instruments (guitar and piano) and my writing, so I’ve got to credit my mom for that aspect of her extreme parenting. As an adult, I have the first three seasons of Arrested Development largely memorized… and I still haven’t watched a ton of music videos.”

“Ask me that same question in a few years (or even next summer!) and I’ll have a better answer then.”

Is YouTube (or ‘online-only’ platforms) a good enough platform by itself to justify creating a music video?

“Damn straight it is.”

“I’m sure it would be if I was genius enough to create one. Some of my students learned Wilbur Soot’s ‘Your New Boyfriend’ and I really enjoyed his clearly low-budget video for that song.”

How much of the “You Are the Fix” video was self-made?

“As a band, we collectively gathered our various lighting rigs, green screens, gaffers tap, spanx, (and instruments too) and spent one twelve-hour day shooting ourselves in Right Coast Recording Studio in Columbia, Pennsylvania (that’s where we recorded our record with Bobby Gentilo). Chris Whalen and Mollie Swartz of Dimestore Dolls both do videography work, as does my housemate Andrea Campbell of Natural Light Films, so our green-screen shoot was remarkably low-budget, jerry-rigged, and based on 24-hour equipment loans from many friends. We shot each band member individually five times (from five different angles) the entire way through the song. That’s 30 individual takes of the song, but with mistakes it wound up being many, many more takes.”

“I prefer live video because I like to see how the musicians achieve the sounds they are getting. I am particularly interested in watching guitarists. It is possible to play the same licks in so many different positions on the neck. When I learn a Guns N’ Roses song, for instance, I want to see where on the neck Slash played that lick, or when I’m working on a Zeppelin song, I want to see how Jimmy Page got that sound, or how the band ended the song live when the record had a fade out instead of an ending.”

How did the video come together? Who helped to animate the clip and how was it done?

“Stefano Bertelli of Seen Film is a magician as well as an artist. I still don’t understand how he took live footage of each band member filmed from different angles in front of a green screen and transformed that into little still paper cut-outs of each of us, and then changed that in turn into a live-moving video. Genius. He built that colorful paper studio-stage set in a matter of hours. I was so impressed with how hard he worked, how creative he is, and how fun it was to mis-communicate with him on WhatsApp (I speak no Italian and there are some English phrases that don’t translate well!)”

Help us to understand the video’s concept in more detail and how it ties into the lyrics.

“The song is about how fun it was to let go of reality (and responsibility) and run around town with Jody Porter. This was in the years when his band was nominated for a Grammy and he was at the height of his rockstar-dom. I am super hard working and pretty straight-laced, but loved living vicariously through him and his misadventures. Sometimes I felt like I was a minder and a babysitter but I loved every minute of it. Honestly, the entire band Fountains of Wayne was a part of many of these adventures in NYC and on tour. It felt appropriate that the song was an homage to them and their success and an era of friendship that we all shared together.

“The footage of Fountains of Wayne that is shown in the projector footage of that video is actually of a concert that they played specifically for me! I had a traumatic brain injury in early 2008 that left me unable to walk and talk, and they (along with quite a few other bands) helped me out financially with a concert, and honoured me as an artist by performing my songs at that concert. The show was filmed and recorded and I was gifted the footage, but I never had an opportunity to make any use of it (or even watch it; I was far too ‘ill’).

“It is fitting that I wound up using their gift in a video I made now that I am finally well enough to release a CD again, nearly 15 years later. In a way, it is a blessing that Jody negated the initial video concept and led us to this video instead, as it honours ALL of the Fountains of Wayne guys, is true to that era, and artistically is so colourful, fun, and vibrant.” 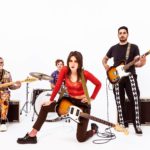 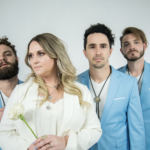