In 2017, he formed Juan Tigre in order to present his own music, followed by releasing his debut album, The Dream Catcher, in 2020.

The name – Juan Tigre – was borrowed from the graphic novel The 100% Believable Adventure of one Juan Tigre, which reveals the travels of Juan Tigre as he tries to discover his past. Along the way, he meets interesting people, overcomes obstacles, and confronts self-doubts, all while taking immense pleasure from his escapades.

Encompassing 11-tracks, highlights on the album include “Sink In,” a dream-like concoction of swirling colors flowing on undulating tendrils. Infused with classical strings and emerging triumphal horns, the tune drifts and glides.

“Dream of Pink and Purple” opens on trickling tones with luminous accents that oscillate and tremble on delicate tones. When the dark, resonant strings enter, the tune takes on a slow majesty, full of slowly swaying hues, transporting listeners to a sublime wonderland erected on rippling textures.

“Cielo del Desierto,” Desert Sky, offers gentle, echoing filaments of sound that shimmer with crystalline coloration. The feel and flow of the song float and waft on expanding waves of silky hylotheism. Whereas “Moebius Trip” burbles and fluctuates with futuristic colors, intertwining like logarithmic spirals.

The penultimate track, “Asleep at Sea,” rides clacking percussion topped by pirouetting layers of sonic pigments. A thumping beat enters, adding a subterranean cadence as the glaze of harmonics takes on fuzzy boundaries. 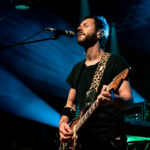 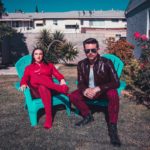