If you’re a musician, 2021 probably wasn’t a year where you would see a huge bump in popularity and notoriety, unless you got pretty creative. Well, that’s exactly what Love Trapezium did, and they were rewarded for their efforts, with the group garnering an increase of 70,000 TikTok followers in a few short months. They’re funnelling that momentum forward into 2022, with the release of their brand new music video for “THANI.”

Aside from their catchy, experimental pop sound, Love Trapezium are becoming well regarded for their creative music videos, and “THANI” is no different, with its unique 1980s anime approach. The group’s videos go above and beyond, using inventive techniques like using custom deepfake footage, painting AI, like in “SHE’S DEAD” which uses AI to render the band in the style of famous paintings, as well as more traditional animation.

“Gassed to finally release this track! Back on the UK hyperpop wave with some desi flavour, this song is about strained family relationships.”

HTML Jones and his musical cohorts Ed (vox, guitar), Joe (keyboard, synths, saxophone), and Will (bass) are one of the most unique pop acts you’ll ever find, offering a British spin on the electronic sounds innovated by artists such as ericdoa, p4rkr, and MIA. They have made their way around Britain on more than one occasion, hitting the clubs and local festivals, playing shows with YNES, Malena Zavala, DAME, and GiedRė. They are really starting to hit their stride, and with some upcoming shows, it feels like it’s going to be a good year for Love Trapezium. 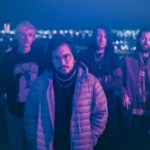 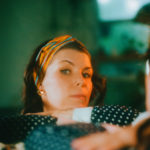