Opening is After Smoke Clears who’s in-ear monitors and branded drumhead show their quality as above what one would typically find at this level of a line-up. Guitar patterns move from the Meshuggah-esque polyrhythmic to Dillinger Escape Plan discordance, whilst the bass’ fretboard is danced across in a manner similar to the way its player struts the stage. Vocals are delivered from impassioned screams through to staccato rap-like fast delivery from a blend of on-stage and in-crowd, whipping up movement from the gathering people. It’s a strong performance packed with groove but unfortunately, the mix being far too bass-heavy detracts from some of the music’s complexity – an artist well worth checking out on record, plus again live soon hopefully with better balance in the mix.

Scheduled main support tonight was Danes Ghost Iris who sadly pulled out last minute due to a positive COVID test, however stepping up ably into the slot are hometown melodic hardcore gang Confessions of a Traitor, a band familiar to many up and down the country from places on similar bills such as this. The whole band bear beaming smiles and share this as one of two rules with tonight’s audience – all must be smiling throughout their set. Rule two is no spoilers for Spider-Man. The band rip precisely through their material, but it’s vocalist Stephen MacConville embodying his role as frontman who steals the show. Popping up on the bar at the back of the venue, through to bounding into the pit and joining the swirling crowd, all whilst backing it up with flawless delivery is fantastic to see. They tease big news to come next year – perhaps it will bring the recognition this long-standing and hard-working band deserves.

Tonight’s headliners InVisions straddle the line between metalcore and deathcore with tracks that range from singalong choruses to downtempo and deep beatdowns akin to the much-lauded Lorna Shore, with the backbone made from bounce along chugging that wouldn’t be out of place in Upon A Burning Body at their catchiest. The band has plenty of fans in attendance tonight despite not yet having an LP to their name, and energy increases threefold from what was already a tearing performance by their predecessors. 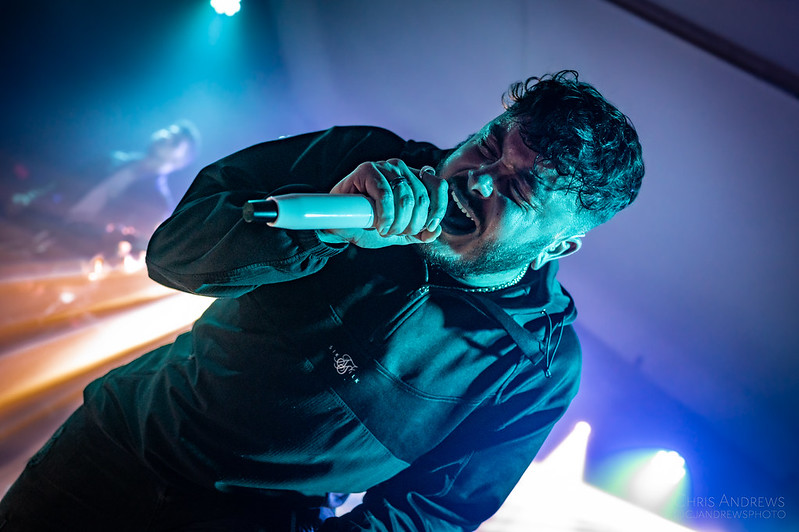 Highlights within their set undoubtedly include the latest single release “D V P E,” bringing a pit of 80% of those in attendance participating, with person slamming against person audible between the beatdown’s chugs and Chinas. Promisingly as well their other most recent single “Annihilist” is the other, with a chorus to be stuck in your head days after hearing it live and seeing you pressing play again and again on metalcore the level of which UK frontrunners Bury Tomorrow or Architects would be proud of.

Making the most use of their four energetic members on stage plus a liberal helping of digital backing track, their sound and performance are much larger than both the size of the venue tonight and its below-capacity crowd. However, if the quality of both the band on stage and their songwriting is anything to go by, the 2022 release of debut album Deadlock could propel this artist right to the very summit of their niche crossover of genres.