It’s hard to deny that there has been anyone with such an impact on British mainstream pop in the last three decades than Gary Barlow. From fronting one of the biggest boy bands in British pop history in Take That to leading the next generation of pop hopefuls as a judge on X-Factor, Gary Barlow has been at the top of the British pop industry from day one.

Out on his “All The Hits Live” Arena tour, the Mancunian pop favourite arrives in Leeds for the latest date and, given that it is a Saturday night, this Yorkshire crowd is up for a festive pop party. With over three decades of material to choose from, including a few lesser-known tracks just to keep his loyal fans on their toes, Gary Barlow takes to a stage that is more akin to a Las Vegas mega show than a wet Saturday night in Leeds. Complete with showgirls, bright lights, multiple costume changes and a top-quality backing band, the first few songs are backed by a show that is pure glitz and glamour. Continuing through the first of multiple Take That hits in the form of “Pray,” Barlow is joined by support act Leona Lewis for a breathtaking duet on “Could It Be Magic.” 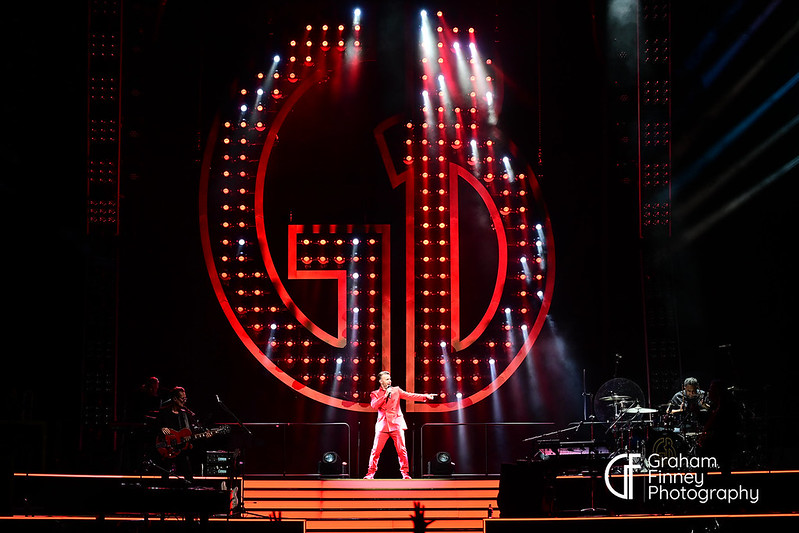 A swift change around on stage saw things turn decidedly festive and, complete with a stage set made up of a mock fireplace, oversized presents and fake snow, Gary Barlow made sure Christmas in Leeds was well and truly underway.

The second half of the show saw the singer give these fans exactly what the title of the tour promised… all the hits. Kicking off with “Greatest Day” then through a mix of Take That and solo songs including “A Million Love Songs” and “Open Road,” Barlow made sure to dive back into his hefty back catalogue to give these fans gifts from all eras of his monumental pop career.

Heading into the final section of the night and Barlow came out all guns blazing with the big pop-hitters including an “Only Takes A Minute / Relight My Fire” medley before wheeling out a selection of pop hits that you would be hard pushed to top. From “Patience” and “Back For Good” to “Shine” and “Cry,” Barlow showed exactly why he has been such an influence on the UK pop scene for three decades. Finishing up with enormous versions of “Rule The World” and “Never Forget,” Gary Barlow had the entire crowd on their feet and, with the assistance of the voices of twelve thousand fans, brought this night of pure pop indulgence to a roof-raising finish.