This is the remix… Bringing new life and new magic to an already happening tune are Marc Baigent and Element Z who have very capably put a whole new spin on singer and rapper IP5’s newest single “Tic Toc.” As compared to the original studio track, this version has a jumpier beat, making this very worthwhile dancefloor material. It’s got a certain groove that all great remixes typically have, while not detracting from the original intention of the artist.

In noting what he enjoys most about the remix, IP5 said,

“I feel like Marc Baigent and Element Z really captured the longing and openness of the lyrics with this remix. The soothing but upbeat dance melody they came up with perfectly brings out the love that’s being expressed in ‘Tic Toc.’”

For a young man still in his early 20s, IP5 knows what he’s doing, and knows where he’s going. He’s been singing and performing professionally since the age of 10, growing up in the Hyde Park neighbourhood of Chicago. Born Isaiah Pittman V, it was at the age of 12 that people began to take notice of him. At that age, he performed at the Michael Jackson memorial in Gary, Indiana and from then on, the talent and the drive was quite apparent to all. Jackson was, of course, a significant inspiration for IP5 as a youngster, as were celebrated Black performers such as Sammy Davis Jr. and Jackie Wilson.

As an artist, his primary focus is to pivot away from the stigma that surrounds Chicago hip hop, and the negativity and disrespect that is far too common within the young Black community. He wants his music to help demonstrate that Black performers can do more than just rap; they can pull off sparkling live vocals, they can dance, and they can also construct a hit song worthy of heavy radio play. Never short on ambition, IP5 is bound and determined to be whatever type of artist he chooses to be. 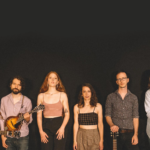