“Spark Up the Fire,” because My Silent Bravery is coming in hot with their brand new summer single. Released earlier this month, the upbeat, reggae-influenced affair is a love song at heart, dressed up as a party tune that resonates as a feel-good summer jam. It will be included on a forthcoming album, with a release date soon to be announced.

The brainchild behind My Silent Bravery is the shrewd and savvy Matthew Wade. Since the release of his debut album under the My Silent Bravery moniker, Unchartered Territory, in 2007, Wade has released six other albums and drawn comparisons to John Mayer and Gavin DeGraw. What really distinguishes Wade from his peers is his relentless DIY approach to his music, releasing songs his way, under his own MWS Records label with no major label backing. He’s earned an audience the hard way, playing thousands of shows, and opening for artists such as Bryan Adams, Billy Idol, Daughtry, Andy Grammer, John Waite, The Wailers, Candlebox, and Rusted Root.

We recently spoke with Matthew to discuss his latest single and video for “Without Love,” working with songwriter Trevor Holmes, taking musical risks, and what’s upcoming for him as a songwriter.

“Without Love” is your latest single, which has turned into a pretty massive hit for you. I’m assuming you must be thrilled with the reaction to it.

Matthew Wade: “I am definitely thrilled with the reaction to it. It was a little risky releasing the song as a single, as the lyrics in the song are a little on the heavier side. However, people have really related to them and embraced its message.”

Part of what has helped spread the word about the single is likely its accompanying music video, which is really beautifully done. Who did you work with to devise the concept for the video and were you very involved in that process?

I think the video really accompanies the song well because it helps in emphasizing the song’s message. What was the video development process like from the initial conception to completing and editing it? How long would you say the whole thing took?

“Since we filmed both videos (‘Bigger’ and ‘Without Love’) at the same time it took a little longer to bring ‘Without Love’ to life. We also were organizing and filming during the pandemic which added time and obstacles to filming the videos. Zack and I first started talking in mid-October of 2020 and filmed in late November after securing locations and actors. Both videos were filmed on one day in late November and the bulk of time went to editing. ‘Bigger’ was completed in early December and ‘Without Love’ in late December. I would say the average edit time was two to three weeks per video, where Zack would send me new cuts based on feedback, until we were both happy with the final version.”

What was the development process like for the video in terms of choosing shooting locations? What made you choose these settings?

“Choosing the locations is always an interesting process. As an independent artist, you are working on a budget so you are looking for creative ways to have cool backdrops that don’t break the bank. We filmed the videos in three locations, a local park, and at two friend’s houses that had lots of amenities like a bar, pool, and fire pit.”

Interestingly, you wrote “Without Love” with an assist from Trevor Holmes who is a previous American Idol contestant. How did you meet Trevor and how did you start working with him?

“I met Trevor when I was recording the Bigger album with my producers Russell Ali and Sanjoy Deb. Trevor was friendly with them and we hit it off and wrote four songs for the album in three days. We wrote songs entitled, ‘Rise up,’ ‘The Reason,’ ‘Run this City,’ and of course ‘Without Love.’ ‘Without Love’ was the last song we wrote for the album, and we wrote it quickly as I had a flight back to Massachusetts to catch. It was one of those songs where we all went the extra mile to try and make the song work and fit in time to write and record parts before I left town and I am so glad we did. The song for me really helps complete the album and give it a lot of depth.”

What about Trevor as a songwriter do you really value? What do you think he really adds to the process that would be missing without him?

“Trevor is a great singer and songwriter and was really easy to work with. He was very attuned to what I wanted to say as an artist, and then helping bring those ideas to life in a very organic way. I felt like we really hit a sweet spot of these songs almost writing themselves.”

Obviously, you and Trevor both have good chemistry together. Do you view Trevor as a future frequent collaborator that you’ll work with regularly?

“It’s hard to say as every project kind of takes its own course for me. For the Bigger album, my co-collaborators were Trevor, Russell, Sanjoy, my good friend Maurico who I have collaborated on many songs with, and another amazing writer and artist named Mitchell Rose. I would definitely be down to work with all of them again. We had a lot of fun and wrote a tremendous amount of music in a very short period of time. I guess we will see what the future has in store.”

You’ve probably gotten this question a ton over the years, but for those of us who don’t know, how did you come up with the name My Silent Bravery as the name you’d release your music under?

“I do get it a lot, but I am always happy to answer it. It was a bit of a risk at the time to change my band name and this is one that is always a conversation starter, so I am very glad that I did (laughs)! The name came about because I was touring under another band name with the initials MSB for a while. Around 2010, my manager at the time suggested we change the band name for marketability and for Google ability. I chose to go with a more commercial name. I wanted to keep the MSB in place, as my fanbase was familiar with it and had a connection to it. My friend Caryn suggested My Silent Bravery and I really thought that embodied what the music was about.

To me, it symbolizes inner strength, perseverance, persistence, and ability to overcome obstacles. I have been dealing with a sports injury over the years and it is a challenge in my life and I continue to work hard to overcome that obstacle. I now try and inspire others to overcome their obstacles through the messages in my music.”

Considering the fact that you have a new single out, I’m guessing you’re probably recording other new music as well. Are you currently writing a new album?

“I am always working on new music! I have several unreleased albums in my pocket at present. This Bigger album is the first in line which I hope to release prior to year’s end.”

You have released seven albums since 2007, which is quite a bit of musical output. How do you feel you have changed over the last 15 years as a songwriter? Do you feel more likely to take risks that you maybe would have been too hesitant to back towards the beginning?

“I think I have changed a lot over the years and have hopefully grown with each new release. I feel like the songs continually have improved which is always the goal. I definitely take more risks and collaborate more than ever. When I first started out, I used to think that all the ideas had to be mine. Now, I just always want to create the best song possible and am much more open to collaboration and feedback.”

Tell us about what you have in store for the coming months. Have you been able to book any live shows that are upcoming?

“I plan to release three more singles and music videos prior to years end from the Bigger album, then release the whole collection of songs together. I still love putting out full albums. Each song to me is a chapter in a larger story. Hopefully a tour to help promote the new album will line up soon. I will also continue to do my two weekly live streams found on my social media (@mysilentbravery) channels at 11 AM EST every Sunday and 8:30 PM EST every Tuesday!

Thanks so much for taking the time to re-connect with me after all these years. I really appreciate the continued support!” 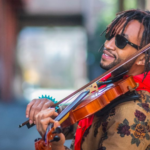 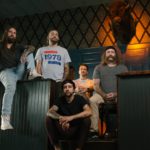