Before we start, let’s be honest, what isn’t there to love about a dancing robot?

We’ll let you ponder that for a bit while we delve into the crazy world of house-lounge favourite Benedict Sinister who has been bothering all sorts of charts with his recent single “Going Away”. Check out why as we premiere the insane new video for the track and, again, ask the question what isn’t there to love about a dancing robot?

“Going Away” is the perfect example yet of Sinister’s extraordinary combination of house lounge music with adult alternative vocal style and subject matter: break-ups and the great art they have inspired, from Verlaine to Hemingway to Gainsbourg, Jimmy Webb, Jeff Buckley and Lana Del Rey – who are all quoted in the song.

Little else is known about Benedict Sinister. He’s been described as a “boundary pushing musician” by one publication and, while concealing his face in a multi-coloured Burning Man mask, wears tuxedo’s from Tom Ford and slippers by Christian Leboutin.

Outrageous? Absolutely. So, who better to have the final say than Sinister himself…

“I chose sexy naked dancing robots as the best illustration for the song ‘Going Away.” The female robot and the astronaut floating in space are symbols of the courage required to be single, while the robot gay dance party at the end is designed to confront traditional gender stereotypes. Robots can be LGBTTQQIAAP too! And proud!” 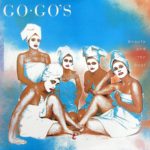 The Go-Go’s – ‘Beauty and the Beat’ [Retro Album Review]