Some of you heavy music fans may disagree, but it’s definitely possible to be really heavy without being heavy at all. With that said, we draw your attention to pop singer Mike Mineo, and his brand new music video for “What Love Is.” While the spunky new tune may not blast you away with ferocious electric guitars, and pounding drums, it’ll give you a good jolt thanks to its weighty subject matter, a passionate tale of battling against a relationship going nowhere.

One can easily detect that passion in Mineo’s intense vocals, with words meant to inspire listeners to have a greater allegiance to themselves, and what’s best for them. It can be difficult to know when it’s time to close the door and not look back, but Mineo wants to reassure you that not only is love a turbulent adventure, but it’s ok to let go and say goodbye when you’re left with no choice.

With a few words on the music video for “What Love Is,” Mineo said, “From the model, to the film crew, to the storyboarders/directors, I was grateful for their time and work. It was an honor to be focused on a single task with a diverse group of talented people. Also, don’t wear a jean jacket and pants in Miami during the summer…”

The intensity on display in “What Love Is” is scattered throughout the Nashville-based artist’s brand new EP, due for release soon, via Red 9 Records. Originally from Boca Raton, Florida, Mineo has come up with a set of songs that emphasize the commanding presence of his expressive tenor voice, well supported by some cinematic arrangements and spacious production. There’s lots more heaviness throughout the EP, like on “Runnin,” a song about succumbing to the unfavourable inclinations of the Western World, and “Fire Sky” which looks at the ominous impact that our disregard of our own planet is having on us, and the environment in which we live.

Motivated by sensitivity, intuition, and a spiritual connection to nature, Mineo is his own man when it comes to his musical journey. He has both physically and musically come a long way to arrive at the point in which he is at right now, a place where he is confident and self-assured in his abilities. This is his moment to shine, and he’s not about to just fritter it away. 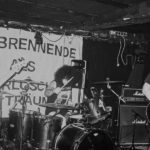