Kick The Ladder may be Kaktus Einarsson’s debut solo record, but you’d be hard-pressed to find a more experienced musician who’s just released his first effort. The Icelandic composer and songwriter is more well known for his role as the lead singer of the highly regarded post-punk band Fufanu. Released on May 21st via One Little Independent, Kick The Ladder is a musical voyage into uncharted waters, inspired by the concept of how we as a society relate to our surroundings, both environmental and personal.

Einarsson wrote the album in Iceland, before setting off for Copenhagen where he worked the songs out with French pianist and experimentalist Thibault Gomez. Also heavily involved in the process was Swiss electronic composer Kurt Uenala, aka Null & Void, who has produced massive acts such as Depeche Mode, Black Rebel Motorcycle Club, The Kills, and Moby. Kick The Ladder is the apex of Einarsson’s love of classical and pop music, bringing the two genres together into one, dazzling work.

Recently, we were afforded the opportunity to have a conversation with Einarsson in which we discussed his debut solo effort Kick The Ladder, the album’s originality, Gomez’s contributions to the finished product, and what’s new with Fufanu.

If anything, this album would get an A+ for originality. Is the finished project quite close to your original vision, or did you shift your vision along the way?

Kaktus Einarsson: “Thank you very much! I have to say, that in the beginning, I was more focused on the methods of making the album, that is to use my skills and knowledge as a contemporary composer mixed with my tools as a songwriter and a producer. As soon as I wrote and did the demo for the song ‘Kick The Ladder,’ the methods became less important… I had managed to create the soundscape that I loved and wanted for my album, and to be honest with you, that was the sound I always wanted for my debut solo album.”

You’ve already had quite a stellar career, between your work in Fufanu and being in bands in your teenage years. Why did you feel like now, at the age of 28, was the right time for you to write and record a solo record?

“Your question really lays the reasons out for me. I have been part of collaborative projects since I was a teenager, and the majority of that work has been with my dearest Gulli. It was just time for me to get to know my self as a standalone artist and explore that side… Both so I could grow and develop personally and professionally, and also so I could continue to contribute into collaborative projects.”

Part of the conceptual space of Kick The Ladder is looking at how we relate to our surroundings, whether it’s environmental or personal. Can you tell us more about the concept of the record and what it all means?

“I don’t look at it as a concept album… I like to think of albums, including this one, as periods. Independent songs, that together make a unit and frame in a period that holds some kind of musical theme and thoughts. The same goes for the lyrics, they are all written during the period of making the album and therefore will most likely create a thread in way. In this case, the lyrics thread around thoughts about my relationship with my environment. How do I communicate with the people around me and how do I grieve? Is our system of adults designed to put us into a box, make us lazy and ignorant towards everything that is not in our near surroundings?”

How long did you work on Kick The Ladder for? Do some of these songs go back several years, or were they all written and recorded specifically for this album?

“All of the music was written for this album, even though I dug a little around and found some old musical sketches that were written previously and took them with me on the journey finishing the album… stuff like the bass line from ‘Ocean’s Heart’ was something I had demoed in 2017, but never done any further work on. I guess we can break the process down like this: six months writing, demoing and building up the pile of ideas to work out of. Six months recording and finalizing arrangements, and then a very relaxed six months due to the lack of stress because of COVID-19 to get the album mixed and mastered.”

In listening through the album, you could say quite convincingly that it really doesn’t sound much like anything else currently out there. Who are some of the artists, or what are some of the genres/sounds that contributed to how you went about writing and recording this album?

“I always mention Sir Gérard Grisey, and most of the time as the first artist that has influenced me with sounds. He is a composer that got me very interested in the spectral scene and has most likely coloured my work a bit. My main man Damon Albarn deserves a shout-out, without my time working with him on Everyday Robot, I would probably never had gotten this interest and understanding of songwriting like I do. Everything with great bass lines like The Class and ESG… But honestly, there was nothing specific that was inspiring me more than anything else for this period. I just wanted to create an album that was the most me as possible.”

You wrote Kick The Ladder in Iceland, before further developing it in Copenhagen with French piano experimentalist Thibault Gomez. What role did Thibault play primarily in helping you develop this record?

“Thibault joined me when I began to shape the soundscape around my demos. I had a very strong idea of using extended playing techniques of classical instruments on the album, and in my search for performers, I found Thibault. He has mastered the prepared piano, and after our second session together, I knew I wouldn’t need to find any other instrumentalist for this role on the record. Together we explored how we could make the prepared piano the main ingredient for the sonic world I was creating. We for example re-created some digital sounds with the piano, tried a lot… most worked, but some didn’t. Without Thibault, the soundscape of this record would NEVER have become what it is.”

Swiss electronic composer Kurt Uenala helped produced the album along with yourself. How did Kurt become involved and what did you value most about his contributions to the record?

“I’ve known Kurt for many years through our mutual friend Sexy Lazer… but it wasn’t until three years ago that I went to New York to do a show with Fufanu that I and Kurt hung out. That made a good connection between us and we started to write each other, mostly about gear and recording techniques. Eventually, I began to send Kurt some of the demos I was working on, and seeking advice. In a very natural way, those chats would turn into our collaboration for this record. I mean… his editing skills are frickin’ crazy, but that’s not what I value the most. He has strong opinions of what he likes and dislikes, and we could talk on a human level about creativity and music that would lead us to make this album of what it is.

About the song “Daydream Echo,” it’s about the words of a New York City street preacher who would shout each day “we’re all going to die” and coincidence or not, the world soon turned into a state of chaos. Can you tell us a little more about how the backstory behind this song?

“So I had the song and lyrics ready when we went to New York to finish the recordings for the record, but I was never really sure about the lyrics and blamed to hard self-criticism about why I didn’t connect to them. When in New York, this woman on the corner was like you say, was always shouting that ‘we are all going to die or going for a ride,’ while people just walked pass her without noticing her. It got me thinking; what if this woman, that most would consider an outsider, was maybe just way ahead of us, and ‘we’ the ‘normal’ ones, are actually just way off track.

One day in the studio, I had these thoughts on my mind, looked at the lyrics of ‘Daydream Echo’ and all of a sudden I made this strong connection to them. I re-wrote a few lines and voila, the lyrics for ‘Daydream Echo’ were born. This is in January 2020… So I guess this woman on the corner was a little ahead of the rest after all.”

It’s been a few years since we last saw new material from Fufanu. Have you been working on anything new for the band during the pandemic?

“No, not yet… but we are in good spirits. I’ve spent the downtime of the pandemic enjoying life and learning how to be dad… loving it.”

“It is true, there’s a big difference. Both worlds are great. Being solo, means that I can let my ‘inner’ control freak loose and do things when I want them and how I see them… no need to ask or wait for permission or feedback. But at the same time, that’s the amazing thing about band collaboration, you get challenged, inspired, and a dialogue about the creation. The cons of each are the pros of the other (laughs).”

Are you hoping to do any touring behind Kick The Ladder, if rules and regulations allow for it? Have you given thought to what a live show would be in support of this record?

“Yes, indeed. I have a tour with John Grant that’s now been postponed until June 2022. That is something I’m very excited for, because I’m going to do those shows only with Thibault on the piano and me on guitar, performing the songs from the album… But then I also have a full band setup ready. Exciting times.” 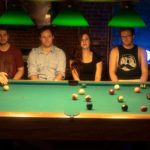 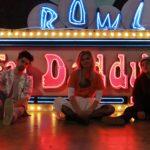