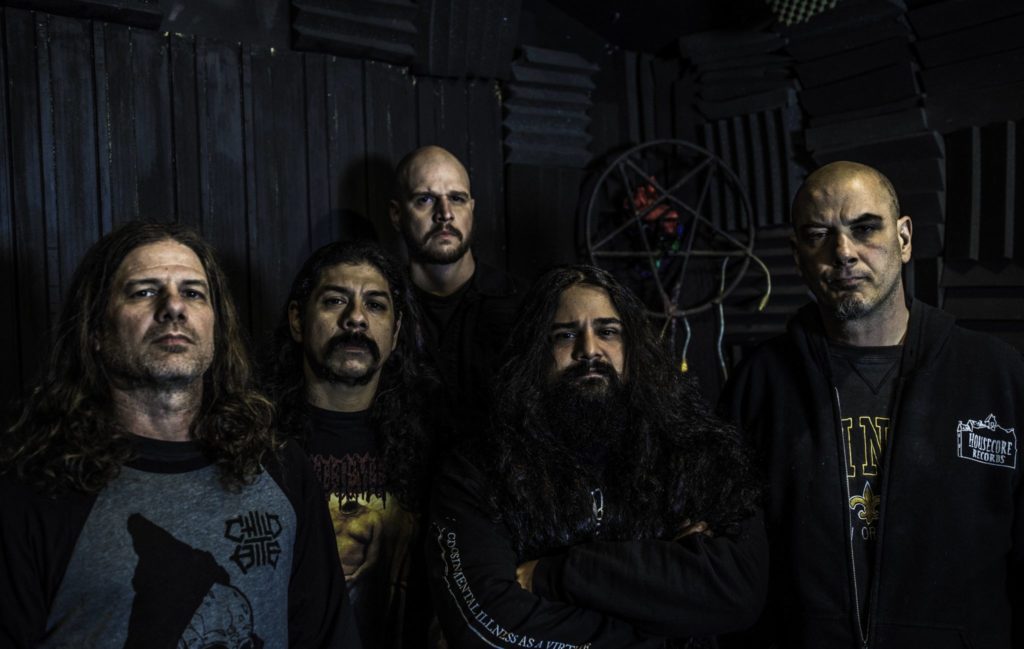 On April 9th, Phil Anselmo and The Illegals streamed a live performance celebrating the legacy of Pantera with a set featuring select cuts from the band’s five classic albums: Cowboys From Hell, Vulgar Display Of Power, Far Beyond Driven, The Great Southern Trendkill, and Reinventing The Steel. The multi-camera shot, fully live performance took place on Friday and remained available on-demand for 72 hours after it went live. The livestream included an opening set by Australian grindcore unit/housecore recording artists King Parrot, who performed from their tight rehearsal space in Australia.

A Vulgar Display of Pantera Livestream started with about 30 minutes of pre-recorded (mock) interviews, slow-motion footage of swine eating, and footage of the band touring Amsterdam in a boat together before flipping to an opening 20 minute set by Australian thrash-masters, King Parrot. King Parrot exploded seven tracks shot through a wide lens mounted above head-level that yielded a fish-eye effect to the room in which the band performed. The filmed result was like the space the band was in couldn’t contain them. Some moments felt like King Parrot was going to break the fourth wall and explode into the room with the viewer, and that was exciting. With material like “Piss Wreck,” “Shit On The Liver,” and “Bozo,” this streaming event was off to a fine start.

And then we flip immediately over to Philip H. Anselmo & the Illegals, featuring Philip H. Anselmo (Pantera, Down, Superjoint, Scour, EnMinor, etc.) with guitarists Stephen Taylor (Superjoint) and Mike DeLeon (Flesh Hoarder, Being Killed, ex-MOD), drummer Jose Manuel “Blue” Gonzalez (Superjoint, Warbeast), and bassist Derek Engemann (Scour, ex-Cattle Decapitation). The band is presented on stage in an undisclosed New Orleans venue with 50 people in the audience (socially spaced). The musicians are cast under some moody blue lighting performing like an MTV Unplugged event. There is no sound until the very last notes of “Suicide Note Pt. I,” before the band starts into “A New Level,” with Phil stopping the song 30 seconds in and starting over again. Even on the internet, sound problems inevitably occur. There were some more noticeable sudden volume changes during the following few songs before things seemed to iron themselves out. “Suicide Note Pt. I” was performed again as the first song of the encore (once the band was informed the sound was messed up).

In the years after Pantera broke up, Phil Anselmo didn’t perform any of the band’s songs in any of his other projects (Down, Superjoint Ritual, and Philip H. Anselmo and the Illegals). A few years back, he began playing the odd Pantera track with The Illegals and Superjoint. In 2019, the Illegals played a special Pantera set during their opening slot for Slayer’s final tour. I believe the impetus was to take that Pantera setlist tour on the road before the pandemic hit and shut the touring industry down.

I struggled with this livestream. The technical issues were frustrating; I logged out of the event and logged back a few times, thinking the sound problems were on my end. This was minor, however. At the heart of it, many of these Pantera songs are so beloved it’s hard to hear them without the Abbott brothers performing them. Some of the classics like “Mouth for War,” “This Love,” and “Domination/Hollow” didn’t sound right being performed by the Illegals; they felt forced.

Pantera’s later catalogue material sounded pretty tight, however, the songs that are more in the Illegals’ wheelhouse. “War Nerve” sounded amazing, as did “Hellbound” and “Sandblasted Skin.” Phil bringing a very young audience member named Roman up on stage to sing “Walk” alongside him was fun to see as well. Roman looked to be about six years old, and one can only imagine what was going through that kid’s mind as he belted out lyrics like “Are you talkin’ to me? No way, punk!” beside the mighty Phil Anselmo. Overall, after the 100-minute set finished, I wasn’t enamoured with it.

During the livestream, some projected images of Vinnie Paul and Dimebag Darrell were showcased behind Jose’s drumkit. There was a large letter ‘P’ and an ‘A’ on either side of the Illegal’s backdrop that displayed video graphics throughout the show. Phil talked a bit about the Abbott brothers’ legacy and the catalogue of songs Pantera left behind. I feel that if this is genuinely going to be a touring thing down the road, it’s going to require a different approach.

1. Disgrace Yourself
2. Need No Saviour
3. Psychotherapy and Valium
4. The Stench of Hardcore Pub Trash
5. Piss Wreck
6. Shit on the Liver
7. Bozo

Philip H. Anselmo and The Illegals Setlist (all Pantera songs):