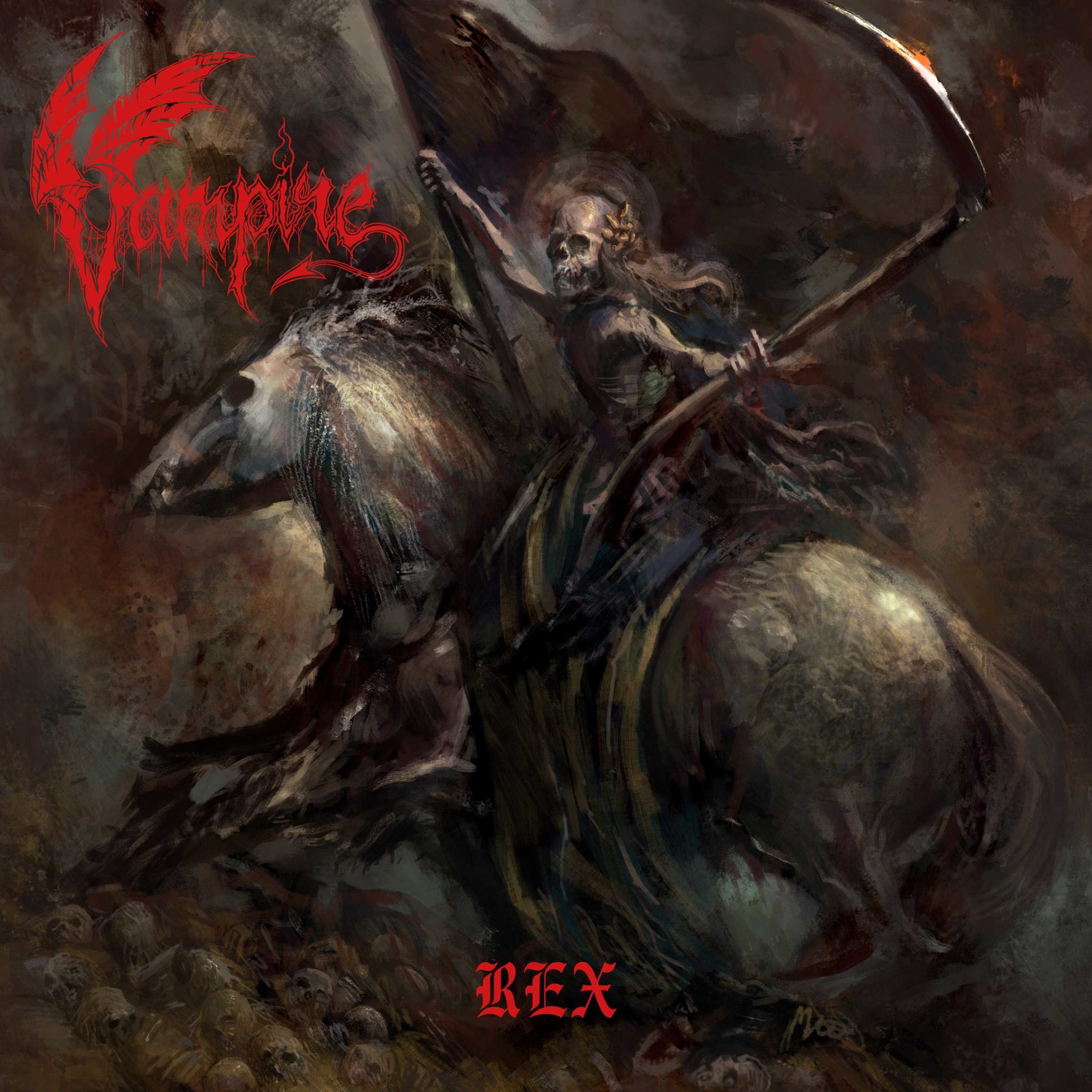 Metal has enjoyed a long flirtation with horror: in the mass media, we’ve seen Iron Maiden turn their zombie mascot, Eddie, into a global brand, and a slew of B-grade films and formulaic television series painting generic teenage dropout villains as slackers blasting their brains into psychotic oblivion with equal parts back-alley drugs, kindergarten devil-worship, and stadium rock. Sweden’s Vampire are nothing like this, though: do not expect any pandering to common perceptions or stereotypes from this pseudonym-rich Swedish quintet. What you can expect is heavy, tight Gothenburg death with a strong thrash slant laced with themes of horror and esotericism.

You can also expect a dark, almost gothic overtone from Rex: not quite the baroque setpieces of Carach Angren, nor the Lovecraftian mystery of Necronomicon, but more like the melancholic atmospheres you would find in Tribulation’s back catalogue. This isn’t teenage angst gothic, it’s mature and tragic gothic that questions the futility of all life, not the latest sale at Hot Topic. Interestingly, the same Swedish death/thrash sound that kickstarted the aforementioned Tribulation’s career is what drives Vampire’s third full-length release.

Looking further back, what really springs to mind is fellow Swedes Repugnant, and specifically their 2006 epic, Epitome of Darkness: nihilistic, crusty and chug-tastic, but with an underlying groove that veers dangerously close to jazzy at times. Vampire might not stray that far from their comfort zone, but they do pad their riff-laden assault with some soft, almost delicate acoustic work and soaring cinematic synths (“Pandemoni” illustrates this perfectly). All that, plus some tremendously accomplished lead work straight from Dave Murray’s playbook (“Wiru-Akka” or “Inspiritus”) make Rex a well-rounded, powerful piece of work to contend with.

The true winner on Rex is “Moloch,” though. While other offerings on the album make extensive use of keys for ambiance (“Pelusion” or “Anima”), “Moloch” effectively leverages the impressive guitar work of Black String and Sepulchral Condor to craft six-string atmospheres that are pure poetry. And if we’re talking lyrical accomplishment, look no further than “Serafim” for text straight out of Behemoth’s esoteric evil playbook:

Kodosh! Father, ye almighty!
The outer spheres and firmament are thine
The tragedy of man lies on my shoulders
Their vanity and holiness are mine

This qabbalistic exhortation to angelic presences may seem out of place on a horror-themed metal album, but taken in context, the pride of the angelic choirs are easily seen as the avenging, haughty and downright dangerous Old Testament gang that spawned his dark majesty Lucifer rather than the shining, singing sycophants contemporary religion has watered them down to.

Vampire may not be the obvious choice for Swedish death metal, nor melodic death, nor even horror metal – but Rex more than amply proves they should be. Their instrumental accomplishment cannot be denied, their themes are intelligent and provocative and their obvious hat-tips to the glory days of thrash and NWOBHM legends are proof positive of their deep commitment to metal. Vampire aren’t doing this for fame, for glory or just to pass the time: Rex is a living, breathing embodiment of contemporary metal virulence and traditional metal values, all meshed together in a swirling maelstrom of technical, dark and brooding musical malevolence.