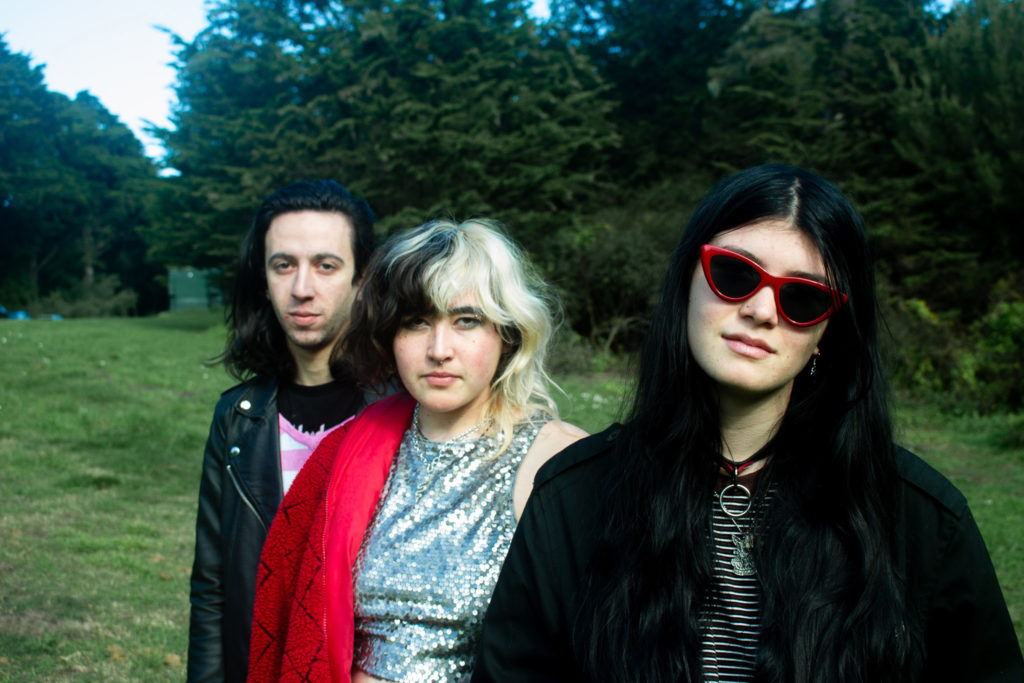 Stereo Six: Punk Trio Destroy Boys and the Records that Helped Them Crush

Bay Area riot grrrl trio Destroy Boys have been blazing their way through Left Coast punk circuits while growing their name with US tours alongside SWMRS and Mannequin Pussy. The band’s sardonic, biting tunes are a perfect blend of political subterfuge, headbang-able rhythms, and the overall catharsis of unrestrained self-expression. It’s scratchy punk that reminds listeners that it doesn’t really matter how technically sound you are, although Destroy Boys certainly have that covered as well, it’s about the passion, dammit. Their newest single, “Honey I’m Home” ( released April 24, 2020), is an exemplary three-minute tune showcasing the band’s controlled chaos while suggesting the young group’s continued maturation.

As Alexia, Violet, and Narsai reach new pinnacles with every release, they are happy to join us for a Stereo Six session to look back at the albums that defined their respective musical development. You may expect a list heavy on the low-fi, femme-led punk records of the world, but Destroy Boys are an eclectic and well-listened group ready to deliver to you, the reader, a broad, educational index of great music.

“Although I only heard first heard this album a year or two ago, it and this band (and their newest album Patience) has (have?) had a huge impact on my life. I learned a few of these songs when we went on tour with them, and I can see what I learned oozing into my own writing through catchy and impactful songs. They use some sick chords!! Also, the content of the album deeply relates to me. ‘Denial’ speaks to my anxiety and ‘Kiss’ comforts me when I am lonely, and every other song by this band makes me happy when I feel like shit. As a woman(ish), queer person, and Latina, I feel empowered seeing Mannequin Pussy play, proving that marginalized people make BADASS, UNIQUE MUSIC, put on INTENSE EMOTIONAL AND ELECTRIFYING SHOWS, and I can do it too. I am so happy about this band entering my life, and you need them too.” (Alexia Roditis)

“This album is a classic, though Born This Way is great too (and listen to her cover of ‘New York, New York’). I listened to Lady Gaga and this album all throughout my childhood. When I was little, we had three German shepherds. We would take them to parks and schools after dark so they could run around and get all their energy out. Sometimes, while my parents entertained the dogs, I would listen to Gaga on my iPod nano, doing a full interpretive dance on and around the playgrounds to ‘Telephone’ and ‘Boys Boys Boys.’ I sang her song ‘Speechless’ in sixth grade, during my only theatre audition ever, and possibly my first self-motivated singing performance (which I did great on, 20/20, thank you). I think Gaga has really had an impact on my singing. I felt like her voice was in my range, not like other higher-pitched voices around at the time. I sang with her every day and embraced my dramatic, theatrical side that I couldn’t show people. She also broke fashion rules and supported the LGBTQ+ community at a pivotal time, which meant a lot to me. I loved Lady Gaga, and I still blast her in the car sometimes. I would love to meet her. Gaga, if you read this, please contact me.” (Alexia Roditis)

“Deftones are a band I’ve truly grown up on. Though I’ve been listening to them my whole life, I didn’t truly start delving into their records until I was about fifteen. Around The Fur stuck with me the hardest because of the undeniably aggressive energy from top to bottom of the record. I was beginning to make my transition from pop-punk lover to pseudo-hardcore kid, and Deftones were the perfect soundtrack. ‘My Own Summer (Shove It)’ is my idea of a flawless song. Ripping guitar, pocket-tight bass, combative drums, and screaming vocals possessing the force of thousands of pissed off hardcore kids. I also have a fondness for the track ‘Rickets’ – nothing encapsulates my rage more than that song.” (Violet Mayugaba)

“I actually discovered this record pretty recently. We were on our first USA tour ever, supporting The Regrettes. I was freshly eighteen, touring the states with my best friends in the world. Bored in the van, I started looking through bands I used to listen to when I had first discovered punk, Distillers being one of them. When I heard the first few seconds of ‘Drain the Blood,’ I knew I had found the exact album I had been looking for my whole life. Brody Dalle’s lyrics and vocal delivery capture a feeling that I’m almost unable to describe – a ferocious ‘wanting’ of something, rejection, pain, loss, guilt…the whole shebang of a situation I was experiencing at that time. There are very few songs in this world that I cherish like I do ‘Dismantle Me.’ I feel as if the lyrics have a similar feel to the lyrics I wrote for ‘I Threw Glass at my Friend’s Eyes and Now I’m on Probation,’ illustrating intense feelings of regret and shame. Also, I love Brody’s outfits.” (Violet Mayugaba)

“Sabbath were always in my world of music, as any person who was raised in rock music probably was, but the first time I listened to this album on my own was life-changing for sure. I’d never heard songs like ‘Electric Funeral,’ ‘Hand of Doom,’ ‘Rat Salad’ or ‘Fairies Wear Boots,’ and, when I did, it opened up a whole new dimension of sounds and grooves that I had no idea existed. Not only did I discover these new songs, but, after listening to the hits over again, such as ‘Iron Man,’ ‘Paranoid’ and ‘War Pigs,’ I pick up on more and more subtleties each time, which to me is always the test of a timeless song. Black Sabbath are one of those bands to me in which every member of the band is pretty much the best at each of their respective instruments, and when they come together they write songs that are just perfection in every sense of the word.” (Narsai Malik)

“This album is so important to me, especially as a drummer, because The Police are the opposite of a ‘heavy band’ but still bring so much energy without even distorting their guitars or being cymbal heavy, and that to me was so fascinating. My favorite tracks on this album would have to be ‘Driven to Tears,’ ‘When the World is Running Down, You Make the Best of What’s Still Around’ (longest song title ever by the way), and ‘Man in a Suitcase.’ All these songs exemplify all the reasons why The Police are one of my favorite bands because they have all the elements of a quintessential Police song: spastic but extremely precise drumming, simple and pretty guitars, Sting’s melodic bass playing, and lyrics that make you think.” (Narsai Malik)