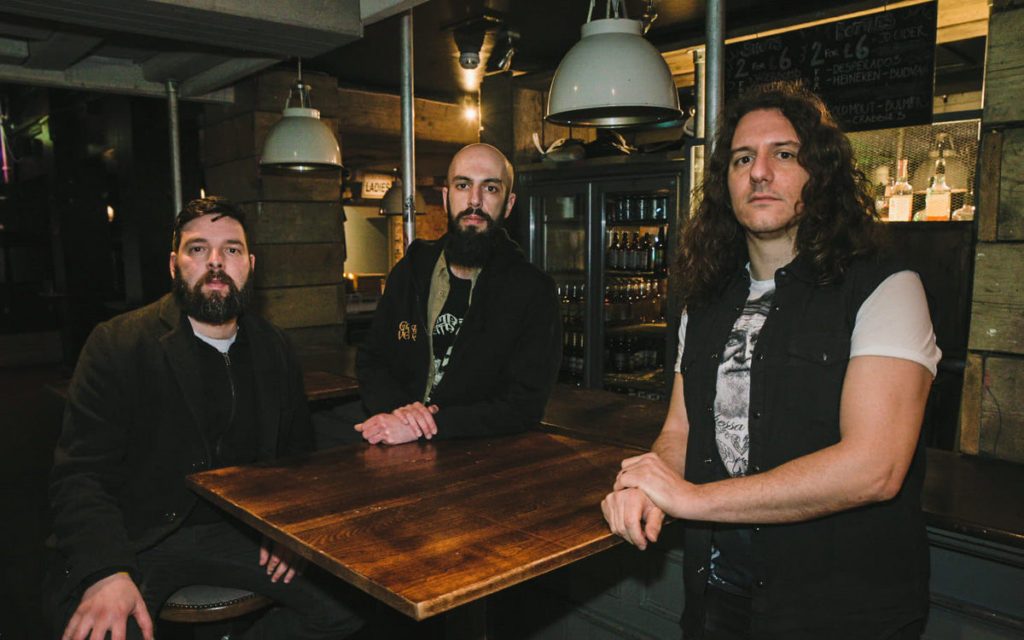 If you like heavy guitar riffs, wish you were a member of the Star Trek Enterprise, and/or would love to learn the ways of the force, then you’ve found a friend in Gramma Vedetta. These heavy rockers have returned with their new EP, A.C.I.D. Compliant, a raucous little four-track collection meant to tide sci-fi-based heavy rock lovers over until the band’s next, more elaborate release.

The trio merges no-nonsense hard rock with a deep passion for science fiction that they intermix within their sound and vocals to create a rocking good time. Work on this EP began at the end of last year, a time that now seems like forever ago, and when life (never mind writing and recording) was a lot easier. The motivation behind the writing of A.C.I.D. Compliant was to offer the group’s audience something to sink their teeth into while they regrouped and found a new drummer. They intended to release the songs in January, but when the new year hit, they found their drummer and then decided to keep the songs for a future full-length. Lo and behold, the coronavirus pandemic arrived and completely threw those plans out the window….

Rather than rest on their laurels, the members of Gramma Vedetta decided to release the EP with the continued uncertainty of when they’ll ever be able to return to a recording studio. Commenting on the release of A.C.I.D. Compliant, the band stated, “We’re excited and proud to release this little gem we crafted following the DIY philosophy. With A.C.I.D Compliant we managed to broaden our listeners’ experience by adding a stronger sci-fi vibe to sound and visuals. A link between the past and the future. A bridge between what we were and what we’re going to be.”

One benefit to the world being on lockdown is that it’s giving the guys a lot of time to focus on their next release. Their intention is to use the outlet of science fiction to create something unconventional, a set of songs with a post-modern sound that will truly stand out as being distinct. Hailing from London, England, Gramma Vedetta previously released their debut, Proof of Concept, at the end of 2018. They have come this far united by their love of classic and modern hard rock, innovators like Led Zeppelin and Black Sabbath, along with more modern-day bands that pushed hard rock into new thematic territory such as Monster Magnet.

The world may be spinning around uncontrollably, but at least we can get lost for a little while in the galaxy of Gramma Vedetta.