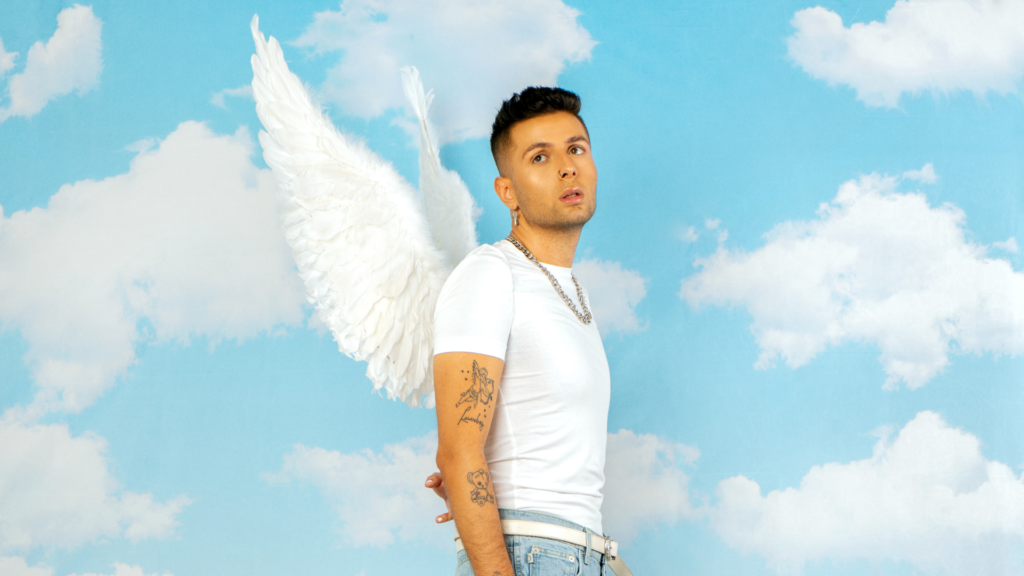 Hailing from New York City, Nicolas McCoppin is a rising LGBTQ pop artist who uses his platform to be an advocate for the LGBTQ community. With many regarding him as “the next Charli XCX,” McCoppin is creating an accepting electro-pop space for all through music that often shares his personal love stories – encouraging others to be vulnerable in their experiences and emotions as well. In the midst of Pride Month, we sat down with Nicolas to hear more about the celebrations from someone who is experiencing it first-hand. Read below to hear Nicolas talk about his first pride celebration, how Pride and Black Lives Matter are intersecting, and what it all means to him.

What does Pride Month mean to you?

Nicolas McCoppin: “Pride month is so important to me! It’s one of my favorite times a year. Living in New York, I’m super lucky that I have NYC Pride to go to every year. The city is always so electric during pride weekend. I’ll never forget my first pride. It was one of the first times I was surrounded by so many people just like me. I realized I wasn’t alone. I just remember how much my first pride meant to me, so this month is always such a celebration for me.”

As an LGBTQ artist, you are a prominent figure for many in the LGBTQ community – some who may be struggling with owning their identity. How do you hope your platform affects people? How do you hope it promotes/encourages people?

“Thank you! For anyone to consider me a figure in the community is such an honor. When I started making music, I told myself that I was going to be unapologetically myself. That meant even the little things like using ‘him/he’ pronouns when singing about love interests. The majority of my team of collaborators are in the LGBTQ+ community. Which was so important for me to get my story across. I remember being a 14-year-old scared gay boy and looking up to Troye Sivan. He was someone who had a big impact on me. It’s definitely harder to be out and make it in the industry. I watched Troye do it and I remember thinking to myself ‘Wow, I can do this too.’ If I can be that for just one person throughout my career… That would mean the entire world to me.”

Who are some people you look up to for inspiration?

“Definitely Troye, like I mentioned above! But there are so many up-and-coming LGBTQ+ artists that I’m constantly inspired by. Kim Petras is another one. Her story in the industry is so inspiring to me. She had to go through so many obstacles before she was able to be where she is today. I’ve met her quite a few times haha! She’s one of the sweetest and supportive people I’ve ever met. I also look up to a lot of female allies in the industry. Ariana Grande and Carly Rae Jepsen are two off the top of my head. They always use their platform to advocate for the community. That’s something that has stuck with me since I was a kid.”

What would you say to those who look up to you for inspiration?

“To anyone who’s struggling with coming out or coming to terms with their identity, you are 100% valid. Everything you’re feeling is normal. It’s so important to surround yourself with a support system. Sometimes you have to make your own support system, which is okay. It all comes with time. It feels like a different lifetime when I was coming out but I still remember how scary everything was.”

Your music addresses topics such as your first queer relationship and the emotions that come along with that…. how has sharing your own personal stories allowed you to relate to fans? Also, how has it allowed you to continue evolving as an artist?

“It’s been so liberating to finally share these stories. I hope that these songs can be relatable to not only LGBTQ+ listeners but to everyone. Most importantly I hope this song is relatable especially to the young audience in the LGBTQ+ community. This song has a sense of innocence with falling in love for the first time. I remember having songs like this when I was younger and it always reminded me that I wasn’t alone. I definitely feel like I’ve been evolving as an artist. With the release of each song, it gets more deep and personal. It’s been the best feeling. I’m so excited to share the full story!”

The LGBTQ community has become widely more accepted in recent years than before. How do you see that acceptance evolving and what else needs to be done?

“The world has absolutely come a long way! It’s so much more accepted now compared to when I was a younger kid. That being said, there’s still so much that needs to be done. Unfortunately, in the last 2 years with our current president, there’s been so many setbacks. Especially with our trans brothers and sisters. It almost feels like we’re going back in time. Now more than ever, it’s so important to be vocal about everything. With the small platform I have as an artist, it’s so important for me to constantly bring awareness to the issues going on.”

Right now, Pride Month is intersecting with the protests against racial injustice. How do those things go hand in hand and relate to one another?

“These two absolutely go hand and hand! The first pride was a riot. People often forget that the Stonewall protests in New York City were violent riots. Those riots were primarily led by our POC trans brothers and sisters. That’s why the Black Lives Matter protests are so important. This is how you get people to finally listen to you. This is how you make a change. It’s our turn to be allies to and to help fight for what’s right.”

What can we do to support both platforms during the month of June and beyond?

“In terms of Pride, even though quarantine is still going on, I think it’s important to not let it silence us. With the parade/pride event cancellations, it’s so important that we still celebrate this month. I think the attention needs to be shifted to our black trans brothers and sisters. They need our support now more than ever. It’s so important to keep signing petitions and donating wherever you can. I just released my new single last week and I decided to donate the proceeds to Black Trans Femmes in the Arts. They are an amazing organization that is currently helping protesters with resources, medical care, and bail.”