Time to get better acquainted with Eliza and her group of Delusionals. More precisely, indie rockers Eliza and The Delusionals, a quartet ready to release their new EP, A State of Living in a Delusional Reality, on March 20th via Cooking Vinyl. What’s more, this is all the while supporting modern indie rock stars Silversun Pickups on an extensive North American tour. That’s a long way to have come in only three short years since the release of their debut EP, The Deeper End, which introduced listeners to the band’s buzzsaw guitars, addictive melodies, and unmistakable vocals of lead singer Eliza Klatt. Klatt is also the Delusionals’ co-founder, along with guitarist Kurt Skuse, whom she has known since childhood.

After falling out of touch, Skuse and Klatt reconnected in Australia’s Gold Coast’s very active music scene which led to the formation of Eliza and The Delusionals. Guitarist Ashley “Tex” Martin knew Klatt from University while bassist Ruby Lee is a new recruit, having just joined a couple of months ago after meeting on tour. The release of A State of Living in a Delusional Reality comes as something of a relief for the band, as it begins a new chapter after each member had experienced many recent personal changes, including Klatt dealing with some mental health issues.

In anticipation of the release of the new EP, in this edition of Tattoo Talk, bassist Ruby Lee offered us the lowdown on her first tattoo, if she has any that she now hates, and the one she got done with her mom present.

Ruby Lee: “My first tattoo was my naked lady bodice with a snake around it, I got it in 2018 in Melbourne, Australia. I just went through a shitty breakup and bought a spontaneous plane ticket and booked myself for a tattoo. It was hilarious, though, because I was still 18 and my mum didn’t want me going alone, so she came with me and sat in the corner and knitted during the process. Surprisingly, though, it’s still one of my favourite pieces.”

“Probably the most meaningful one is my ‘K’ tattoo on my arm, it’s for my old dog who passed away last year, not long before we left for the U.S. I wanted something for when I was away, so I just got the letter of her first name. Another is my ‘Killjoy’ tattoo on my forearm, it’s for my favourite band My Chemical Romance. I didn’t want something obvious, so I just went with the word Killjoy because that’s the word that resonated with me when thinking about the band.”

“Most of my tattoos were done by Damien in Brisbane, his Instagram is @lost_x_art. He’s an insane artist and he did my statue, ‘K’ and my eye one which was one of his flash pieces!” 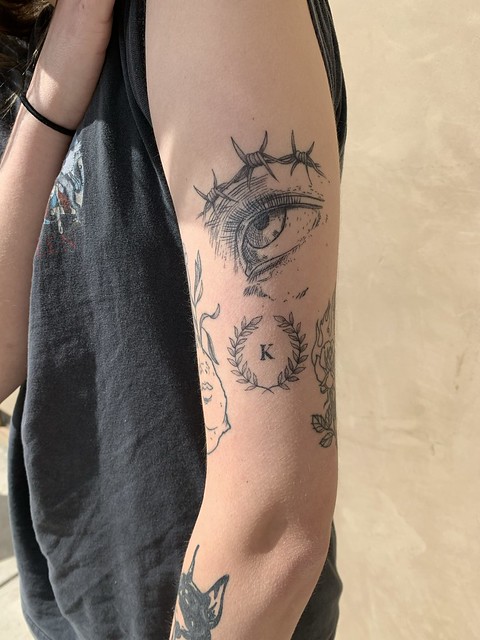 “I definitely want to get more, but I’m not entirely sure what yet, I either have an idea in my head for months or I literally think of something or see something I like, and I get it the next day. I’m liking the idea of a snake at the moment though.”

“I don’t hate any of my tattoos, but I do always forget about my rose tattoo on the back of my arm, probably because I don’t see it all the time and it also was very spontaneous so I don’t really have a connection with it.”

“My most recent tattoo was a Doberman dog on my forearm, and it’s 90 percent all black and I remember sitting there watching him do it and getting more and more annoyed that it wasn’t done yet, definitely had to try and zone out because it was getting really spicy towards the end. The healing process of that was tough too because three days later I went to a festival and it was all outdoors and definitely felt the burn of that. I ended up tying my hat around my arm with a hair tie to shield it from the sun.”

“It’s probably an even balance between something planned and whenever the mood strikes. The first few tattoos I got were very much things I’ve been thinking about for a while, like my first tattoo and my statue head. Others were more like what I feel like, for example, I got my dragon tattoo because I saw a picture of a dragon and thought ‘yeah that’s sick I’m going to get that,’ and two days later it was on my skin.”

“Probably the craziest would be the first tattoo I got when my mum came with me and sat in the corner and knitted while I was getting it. I wasn’t even embarrassed about it, because my tattoo artist also loved knitting and her and my mym were having an awesome conversation about it.”

“Nothing crazy personal. I tend to get tattoos when I experience some emotional hardship like breakups, so usually, we just talk about that.” 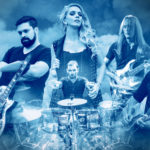 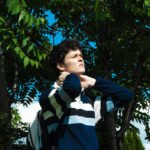 Sgmaniak Delivers a Totally “Moonlight Feel” on His New Single