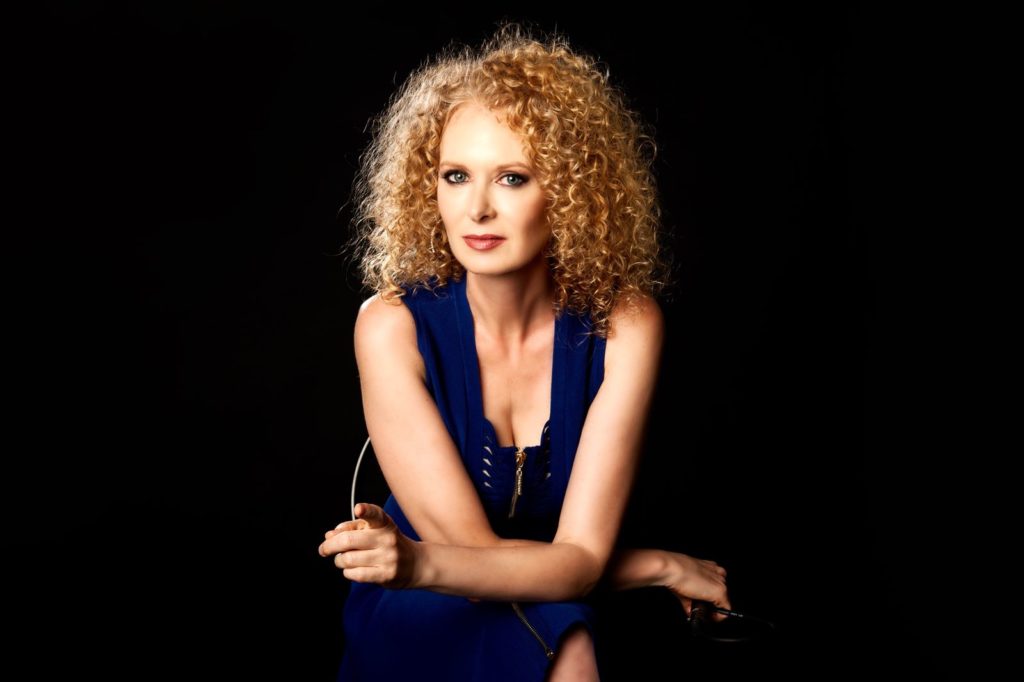 Spanish-Canadian singer-songwriter, Nancy Ruth is someone whom one would refer to as a truly global musician. Despite her roots, she has been composing music all over the world for some time now, with stops along the way in Morocco, Brunei, Polynesia, and Panama. Rather than stick to her regular tendencies and routines, Ruth chooses to instead adapt her lifestyle according to where she lives, immersing particularly in the local musical traditions and culture. Currently living in Malaga, Spain, Ruth has become an internationally recognized artist ever since she departed Toronto’s Royal Conservatory of Music.

Ruth recently made her return as a recording artist with the release of her new music video “Breathing In Indigo.” Ironically, the song and video’s underlying themes have become all too true given the current global health pandemic due to the rapid spread of COVID-19. As Ruth explains, “When I approached director Jorge Pérez last year about doing a video for ‘Breathing In Indigo,’ he asked me what the song was about. I said, ‘I feel an impending change in the air, and it’s surreal.’ So the visual goal was to transmit surrealism. I never imagined that the song and video would be released in this time of ‘change in the air’ created by a virus. Nor did I know why I had this impulse to cover my mouth for the cover photo. Interesting, but here we are, ‘breathing in indigo.’”

If anything, that’s certainly eerie, to say the least. Ruth has been generous enough to offer her time and discuss in much greater length and detail how the coronavirus pandemic is affecting musicians of all kinds and how they can have an effect on the global conversation in such a time of shock and uncertainty.

– Musicians around the globe are in a state of shock after having our tours cancelled, studio sessions postponed until further notice, and venues shut down. And technicians, promoters, and venues are also in an especially difficult situation.

Meanwhile, the rest of the world is struggling to adapt to the effect the coronavirus is having on our daily lives. Not to mention that people are dying. So, right now, you could argue it to be in bad taste that we promote anything other than hand washing and social distancing.

But I think it’s worth questioning the role music could have in this moment of crisis. Is this the right time to be releasing and promoting music? In the face of the first truly global crisis in a century, what role can musicians play?

I spent my youth in Canada, but have lived much of my life in Spain, where I am now. We are entering our second week of confinement as ordered by the government’s ‘state of emergency’ legislation. Everything is closed, with the exception of some grocery stores and pharmacies. We’re only allowed outside to buy food or medication if it’s absolutely necessary, or to briefly take the dog out for a walk. Police and military are everywhere, fining anyone who tries to stretch the rules.

As a creative person, I have always valued my freedom above all else. I also recognize that I am privileged: I was born in a time of peace, I have never been called to war, I’ve never lived on the street, and I am healthy. So as I pass these days in solitary confinement, I realize my battles are petty: I can’t go outside and play, and there are no gigs in sight. What to do, then? How can I feel useful at this time?

My whole life until now has revolved around touring. My daily work is deeply ingrained: I work on new compositions, and I practice the piano, guitar, and voice. I write out arrangements, navigating programs like Logic, Sibelius and Final Cut, organize rehearsals, prepare for recording sessions, research venues territory by territory, and maintain every database associated with this endless work. Then I pitch to festivals and work on tour logistics, booking flights, hotels and transport.

Finally, we get to the all-consuming subject of social media. Creating ‘content’ (such an impersonal sounding term), engaging with fans, answering questions and private messages, responding to comments. Oh, and then there’s YouTube, and that pressure of getting enough subscribers and watch-hours to actually make some money.

There’s more to do! I pitch to Spotify playlists, but is that worth the trouble? What about that email I just got about getting verified on Amazon, will that make a difference? And do I still really need to be on LinkedIn? I’m also learning more about the ever-changing and complex subject of music publishing, how royalties are generated, and then chasing after them. The paperwork is endless…

And to top it all off, there’s the whole subject of SEO and those experts who email me unsolicited website audits telling me I need to fix those broken links and attend to critical errors, and honestly, I just haven’t gotten to that yet.

Is this sounding at all familiar?

I’ve only scratched the surface of what many of us do each day. Unfortunately, the music business has less and less to do with the practice of being a musician. But to stay in the touring game as self-managed artists, this is what it’s like. It’s exhausting.

Have your well-meaning friends and family ever asked, “what do you do all day?” You just have to laugh.

So, if I’m completely honest, there have been times when I’ve wished I could just stop everything, and re-evaluate.

And suddenly, that wish has come true.

Ok, so this pause has been imposed by this obligatory confinement due to COVID-19. And there are definitely reasons to be worried about that.

But unexpectedly, I find myself using this time to re-evaluate the endless music biz to-do list outlined above. I’ve never had a day job, so this work is a choice that I’ve made. But I do feel like things have been getting more and more out of control for some time now. I’ll explain…

I was very young when I started my professional music career back in 1986, singing in bands. My four-piece was signed with the Feldman agency in Vancouver. We were making good money back then playing six-nighters, including a healthy budget for a decent PA, three bins a-side, 40 lights and a sound man who traveled with us.

We were booked solid for years. I never had to think about promotion, logistics, emails, social media, or pitching anything to anyone. All I had to do was practice, sing, buy a few good outfits to wear, and do a band photo once a year. Ah, the good old days.

Musicians rarely make money from music sales anymore, making it impossible to recoup recording costs. As for touring, one big factor has changed: it’s generally the musician, and not the venue, that assumes most of the financial risk (often playing for a cut of sales as opposed to a guaranteed fee) and costs of promotion, whether directly (hiring a publicist to promote a show or doing it ourselves), or indirectly (having our social media numbers and fan engagement high enough for bookers to take an interest).

Subsequently, a whole new industry has been spawned: DIY artist services, focusing on online promotion. I’ll name just a few ways musicians are encouraged to spend their money to keep the ball rolling:

Some of these services are necessary and empowering for independent musicians, while others waste time and money as they feed on musicians’ dreams of success. I’m not out to demonize; most of these businesses were started as sidelines by musicians who are just trying to survive.

The problem is, I just feel that this system isn’t sustainable. A self-managed original music artist will typically have far more expenses than gig income, and not nearly enough time in the day to stay on top of that never-ending to-do list.

So again, it’s such a strange feeling to have this whole wheel pause so unexpectedly.

In an attempt to be optimistic, here are some thoughts:

– Living in Spain, I’m constantly reminded of the fact that making music is a natural impulse: an effective means of expression, of communication. It’s a joyful way to connect with other humans. Spaniards sing while cooking, cleaning, even selling something (as in the ‘pregón’ tradition). In this time of confinement, we play music together with our neighbours from balcony to balcony. Making music can be fun! Sometimes, as we suffocate in our music biz to-do list, we can forget that.

– Musicians who would otherwise be touring right now, or working other jobs, have more time to practice and re-evaluate their objectives and motives. I’m predicting a tremendous surge of creativity. A tidal wave of new expression.

– When we’re allowed outside again and venues can re-open, I think people will have a renewed desire to get out and be entertained. People are going to be starved for the live music experience. So maybe venues and audiences alike will rediscover the value of what musicians do, and find more sustainable ways to pay for it.

– This downtime could have a positive impact on kids (and all of us) whose attention spans have become so short that they can’t listen to more than ten seconds of a song before scrolling to something else. Maybe in a quiet, quarantined afternoon, someone will discover the pleasure of listening to a whole song, undistracted, for the first time.

– As nature takes a break and goes into self-repair during this period of reduced travel and industry, maybe we will also take more breaks in nature. That can only be a good thing for creativity and expression.

– After all this social distancing, I hope we’ll all remember how important human contact is. Here in Europe, we are so used to greeting our friends with kisses on the cheeks. We’re all waiting to be together again and make music in the same space.

– Maybe musicians will become more united after this episode. We’re already reaching out to each other to discuss how our careers have been impacted by all the cancelled tours. Maybe we’ll remind ourselves of our worth, and agree to not undervalue our dedication and talents by playing for free, or for peanuts.

– I hope venues will get a break, too. They’ve been scraping by with increasing rents, taxes and sometimes even fines for supporting live music. Maybe after this social drought, local government will realize that live music is good for the well-being of its citizens.

– I hope musicians and venues will come back together after all of this to work in mutual appreciation. Keeping live music going is a joint effort. Let’s stay mindful of that, and be pros.

– As far as that endless digital to-do list is concerned, I need to cut mine right back. I can’t control the ever-changing digital landscape, but I can commit to focusing on what I most want to say artistically, and focus on the quality of what I create and share. Not the quantity.

So what role can musicians play during this global crisis? We can do what we’ve done for centuries, if not millennia. If your music creates a connection, whether it’s because it’s cathartic, inspiring, entertaining, or just simply because it feels good to listen to, then, you’re doing your part. Music unites, and in this time of social distancing, there is no greater need for unity.