With fifteen years of experience to their name, the sub-genre of cinematic psych-rock has been in good hands with bands like Federale leading the charge. With seven permanent members behind the creation and composition of their elaborate songs, the Portland, Oregon-based group has established itself as one of the most innovative and original acts currently mining the space of the U.S. west coast.

The roots of Federale extend back to Collin Hegna, who used to be a member of The Brian Jonestown Massacre. Upon leaving that group, Hegna formed a group called Cocaine Unicorn and out of that band’s breakup came the formation of Federale. Federale was originally thought of as an outlet for Hegna and his fellow bandmates to write music inspired by 1960s and 1970s European soundtracks, especially those that came out of Italy and popularized by the Spaghetti Western and Giallo genres.

Still going strong in 2019, Federale will release their fifth album No Justice on November 8th through Jealous Butcher Records (which you can now pre-order here). For this record, the band has embraced the massive scope of orchestral cinematic production with help from members of the Oregon Symphony which has aided in giving this record the precision it was meant to have. The lyrical and orchestral wizardry you’ll find on No Justice definitively proves why Federale stands apart from the rest of the crowd. It’s an album that feels like the defining statement of a band that’s still rising, even so many years into their existence.

But enough of the hype, why don’t we let Federale speak for themselves? We recently caught up with Federale bassist and singer Collin Hegna to discover a lot more about No Justice, what truly differentiates it from the band’s previous four albums, and the low-down on all the writing and recording details.

Listen to the new No Justice’s standout track “Trouble”:

So you have your fifth studio album No Justice due out on November 8th. What can you tell us in a nutshell about what we can expect from this new record?

Collin Hegna: “This album is the most lyrically-driven of ours so far. Our first two records are completely instrumental. As we’ve gone along more and more songs have gained a more traditional song structure with a sung vocal featuring a narrative, lyrical style. But we’ve also tried to retain what we’ve learned from doing instrumental music and that is to have really engaging arrangements. The sorts that you don’t normally hear in a rock album. So, for us, that means strings and horns and vibes and a full orchestral palette. So the songs can get pretty epic given the scope of music.

I was listening to some of the tracks on No Justice and there’s a sort of “Western,” old-time vibe and production contained within the songs. Where did this influence come from when you were writing and recording this album?

Hegna: “In some ways, this might be our least ‘western’ album. We’re massively influenced by film music and specifically ‘60s European genre film music such as Spaghetti Westerns and Giallos. People sometimes think that we are going for an “American” style of western influence, but that’s never really been the case. Our band is made up of Americans in the actual west copying Italians copying their perceived notion of the American Western. So what you wind up with is something that’s not exactly what you think it is. It’s unique and unusual.”

Federale’s latest record No Justice is due out on November 8th. Get a look at the album’s cover artwork: 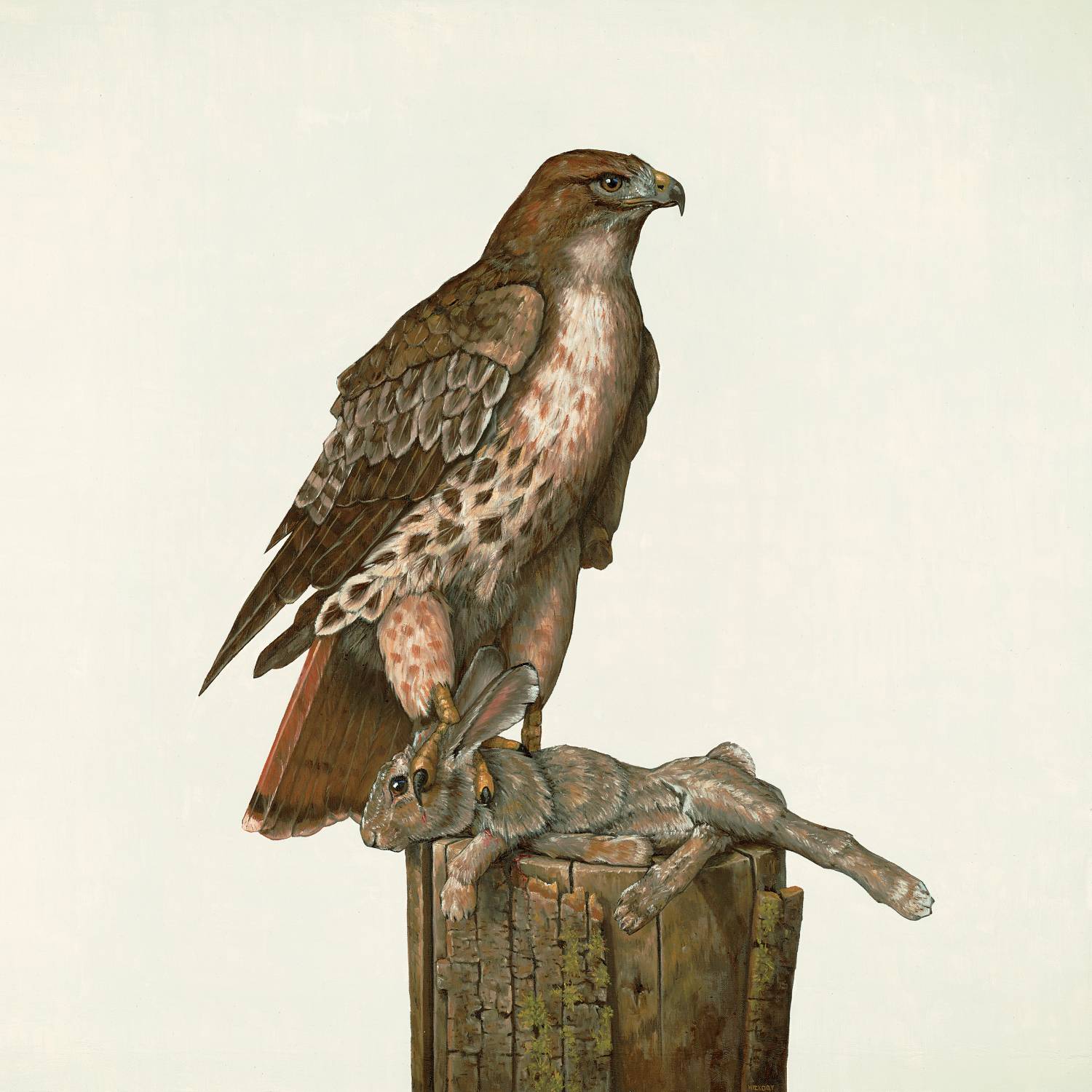 I particularly enjoyed the production, as the songs on No Justice sound well-mixed and well-recorded. Who did you work with in producing and recording this record?

Hegna: “We recorded the whole album ourselves at Revolver Studios in Portland. Nalin Silva (Federale’s bass player) and I own and operate Revolver. I’m a record producer and engineer by trade so we probably did geek out quite a bit when recording and during production. The mixing duties were handed over to Jeff Stuart Saltzman who is a mixing wizard. He’s actually mixed our previous two records as well. In my opinion, he has mixed some of the finest records to come out of Portland over the past 20 years.”

What tracks in particular posed a real challenge for you when writing and recording No Justice?

Hegna: “The song ‘Trouble’ was a real departure for us from our more traditional Morricone-inspired jams. It’s a whole new feel and groove that is something we’ve never explored. There’s also a lot of jazz elements in it. As well as time changes and key changes. It’s in two languages (English and French) and it’s a duet on top of that. There’s almost no guitar on it at all which was a departure for a decidedly guitar-heavy band. And there’s some pretty cool string arranging. So, overall, we needed to start from a whole new set of tools that were new to us. It was a bit of a challenge to get used to what we were doing, but once we did I think the results are pretty cool.”

Hegna: “Again, I think it’s the presence of a lead vocalist (which in most cases is me) singing in a more traditional manner. That’s strangely non-traditional for us. There’s also very little in the way of electric guitars. Which is a heavily used instrument in most of our catalog. We used a lot of piano and keys and synths and orchestral instruments instead.”

Watch the music video for “I Swore I’d Never Kill” off of the band’s 2016 album All the Colours of the Dark:

Now, typically speaking, bands tend to either be made up of four or five members. Federale is composed of seven permanent members. What would you say the primary challenge of writing and recording as a seven-piece band?

Hegna: “Yeah, you don’t want to have everything going at once just because you can. It’s a matter of saving a voice or an instrument to come in at the right time and not jumping the gun. We throw a lot of ideas at the wall and wind up only using a fraction of them. I’d say using restraint is the hardest part.”

With seven members, there obviously would be so many ideas and personal preferences among such accomplished musicians. Do you ever find it difficult to keep everyone on the same page when you’re writing and composing an album?

Hegna: “The songs on this record are all written by me and arranged by myself and our drummer Brian Gardiner. I occasionally get help in the lyrics department from a few other collaborators, but the bulk of the general conceptualizing is done by me. It’s hard to create these kinds of arrangements by committee or through improvisation so having a single unified vision is often required.”

Do you typically all write together in a rehearsal space? Or do members individually bring in their own parts which you then find a way to integrate together into a song?

Hegna: “As studio nerds, we write the record in the studio. Kind of like how the Beatles operated after ceasing to play live gigs. A lot of the parts get written out in sheet music form before they are performed or recorded. In that way, it’s a bit closer to classical music than a rock band. Five of the seven of us have degrees in music (and the two that don’t are maybe even better with music theory) so we utilize those skills and embrace them. But, that said, I always leave room for improvisation and the ‘unplanned moments.’”

Listen to another cut off of No Justice with the song “Aim For The Heart”:

With the crossover appeal of your music into rock, country, and psychedelia, I could imagine you have a fairly significant cross-section of fans. When you play live and meet fans, do you find that your audience tends to be quite diverse?

Hegna: “Oh yeah, definitely. I think it’s always great when we play all-ages shows to see kids bobbing their heads next to some old-timers! We get a lot of folks that are wanting to hear the more ‘western’ element. I’m happy to play that up! As well as the psych kids and rockers. We also get a lot of folks who enjoy our music from films. As well as folks who want to see our singer Maria (Karlin) and her operatic vocal prowess. I think one should really strive to be able to appeal to as many folks as possible. Music brings people together!”

So you have some shows lined up for the rest of the year throughout California and the Western United States. Are you planning on adding other dates throughout the fall?

Hegna: “Yeah, we’re doing a bunch of shows around the release. Including playing directly before The Black Angels and John Cale at the Levitation Festival in Austin November 9th. We are looking at adding some more shows in early 2020. We don’t really do big long tours, but we will be hitting major markets where and when we can. Stay tuned!”