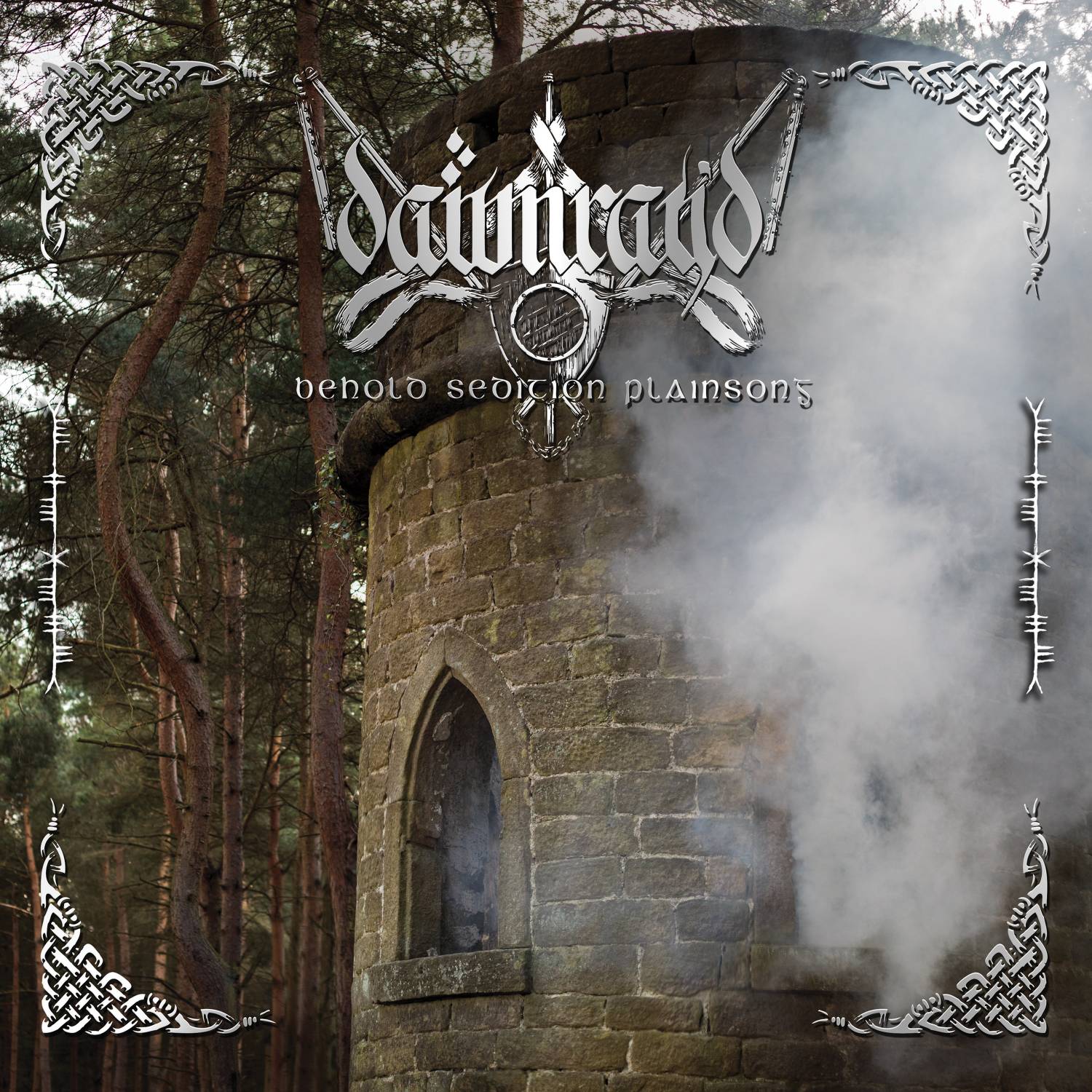 Black metal is having something of an identity crisis at the moment. Someone, somewhere, kicked over its stone and discovered a distressing number of fascists crawling underneath. So, in response, a growing number of explicitly anti-fascist bands have mercifully arrived on the scene. Liverpool’s Dawn Ray’d are leading the charge with their second album, Behold Sedition Plainsong (find streaming/purchase options here), which doubles down on their established formula of blending blistering black metal with folk elements to deliver fearsome anti-fascist statements.

They immediately set aside any uncertainty as to where their politics lie. Intro track “Raise the Flails” is a short sharp shock, starting with the lyrical violin of Simon B and plaintive guitar courtesy of Fabian D, which build to the furious scream: “IT’S TIME FOR NEW TALES OF RESISTANCE.” Let there be no doubt what colours this band is flying.

And this is the same across the album. Simon B screams and occasionally sings, lyrics detailing police brutality, defiant exhortations to anti-fascist resistance, concerns for the environment, and fearsome anti-capitalist anthems, all of which make the album into a ferocious denouncement of wishy-washy centrists. There is no subtlety in the lyrics, and nor should there be. The time for subtle, nuanced debates about whether fascism is bad and/or has a place in the scene of black metal was never. It’s certainly not now. We all know fascism is bad. There is no debate on the matter. It has no place in metal. It’s an astonishingly low bar to clear, yet it’s one a distressing number of bands fail to clear. Dawn Ray’d are not interested in being subtle about this.

Kicking off the album and the ensuing mayhem is “Raise The Flails”:

To fully illustrate that point, the album is entitled Behold Sedition Plainsong. Sedition is a noun meaning “conduct that incites rebellion against authority.” Sandwiching it between “Behold” and “Plainsong” is thus an indicator of how nuanced the record is going to be. That is, it isn’t. This is sedition in plain song. So, even from the title, listeners know where they stand. Hence lyrics like those on “Like Smoke Into Fog.” This is a serious rebuke to the police: “To the officers that didn’t pull the trigger/Yet find the guilt uncomfortable/Tear off and burn that uniform/Or become equally culpable.” Although the police in the U.S. are much more well-armed than those in Britain, the police in both countries have struggled with racial profiling and itchy trigger-fingers, leading to the “All Cops Are Bastards” slogan being a frequent sight in left-wing circles. This is undoubtedly the sentiment being channelled here. The same song rails against homophobic priests – “A bullet for the homophobic priests… How dare you target love” – and anti-immigrant judges and bailiffs: “From the bailiffs to the judges… Burn their deportation orders! And save accelerant for the devils/That enforce the borders.” Behold sedition in plain song.

Elsewhere, the band urge listeners to think of the environment, and the animals whose lives are being destroyed through the ecocidal machinations of late-stage capitalism. “Salvation Rite” exhibits bleak imagery surrounding the amount of toxic waste and rubbish pumped into rivers and dumped in the ocean: “The rivers turn to spite us/By slowly feeding us poison/The sea spits at us debris/On which it is slowly choking.” But it also contains a plea to consider the animals whose lives such practices endanger: “I wonder if the animals know something’s wrong… I wonder if they have stories/Some beautifully written lore/A tragically useless explanation/Equal in delusion to the religions of men?” Religions here presumably meaning both the religion of capitalism and the corrupted Christianity on which it is based, it’s also the angriest way in which I’ve ever heard the word “beautifully” pronounced. Simon B’s bitter howl punctuates the song with bile and hatred that the environmentally-destructive capitalists thoroughly deserve.

Check out the new video for the single “Like Smoke Into Fog”:

The anger that suffuses this album is undeniably justified. Take a quick look through the headlines on any given day at the moment and you’ll come across horror story after horror story. I won’t pontificate. The horrors these stories discuss are very real. Exaggerated in some cases perhaps, but undoubtedly real. The planet is on fire. Fascists are in seats of power. Again. Dawn Ray’d stand very defiantly against all of that, and show no desire to be subtle in trying to get listeners on side.

That being said, the lack of nuance in the music itself makes for something of a wearying listen. The black metal is suitably blistering. Furious blast-beats from Matthew B, fearsome howls from Simon B, punishing tremolo riffs from Fabian D – all the hallmarks of solid black metal. So far so good, and it is good black metal. The vocals are prominent enough in the mix that you can actually discern what Simon is saying, and the production is pleasantly clean for a black metal record – but still with enough harsh distortion to sound suitably grim and frostbitten. The use of a very plaintive, almost mournful violin from Simon B grounds the music with a folk element that also positions the places at the forefront of a grass-roots, working-class anti-fascist movement within metal: insofar as ‘folk music’ is, by dint of its very name, the music of the people, its incorporation into the music positions the group accordingly as both among and leading the people in this fight. This all also points to a considered consolidation and evolution of their sound as exhibited on predecessor The Unlawful Assembly.

But that’s also where the subtlety ends. There are few standout moments, the ominous rumbles of the opening to “Soon Will Be The Age Of Lessons” being the main one. The melodic line of most of the songs segues between the mournful violin and the pummelling guitar seemingly without thought. Juxtaposing the violin and the guitar makes both stand out more, giving a greater ferocity to the black metal and increasing the fragility of the violin melodies, but that’s about as far as it goes. Threading the violin through the melody in the vein of more atmospheric black metal bands like Violet Cold, or incorporating folk rhythms into the bass section in the vein of Primordial would raise the music on offer to greater heights. Alternatively, offer some more intricate violin melodies as interludes in their own right, giving the listeners’ ears some breathing space in between the ferocious black metal anthems.

This is, I concede, something of a wimpy standpoint: “that’s some lovely anti-fascism you have there, could I have it in a nicer package please?” No, say Dawn Ray’d, and reasonably so. For the delivery of such blunt lyrics, simple is better – see “Nazi Punks Fuck Off” by Dead Kennedys, for example. The themes on display wouldn’t suit the kind of layered beauty that Alcest or Sólstafir can conjure, for example. The album feels very much like a brick to the face: the music is loud and harsh, and the lyrics are full of bile and fury. And in the face of our current political and ecological situation, the time for subtlety and nicely-packaged ideals is gone. This is sedition, in plain song. It is a furious denouncement of those who sit on the fence and say that there are bad people on both sides of the political argument. It is little short of a loud trumpet blast against the monstrous regiments of fascism, capitalism, and ecocide that seem hell-bent on destroying the world in the pursuit of profit and power.

Ultimately, it is a very good thing that there are bands like Dawn Ray’d to bring a renewed vigour to the fight. Behold Sedition Plainsong is as loud and furious a call to arms as we could hope for, and one that’s desperately needed in this day and age.