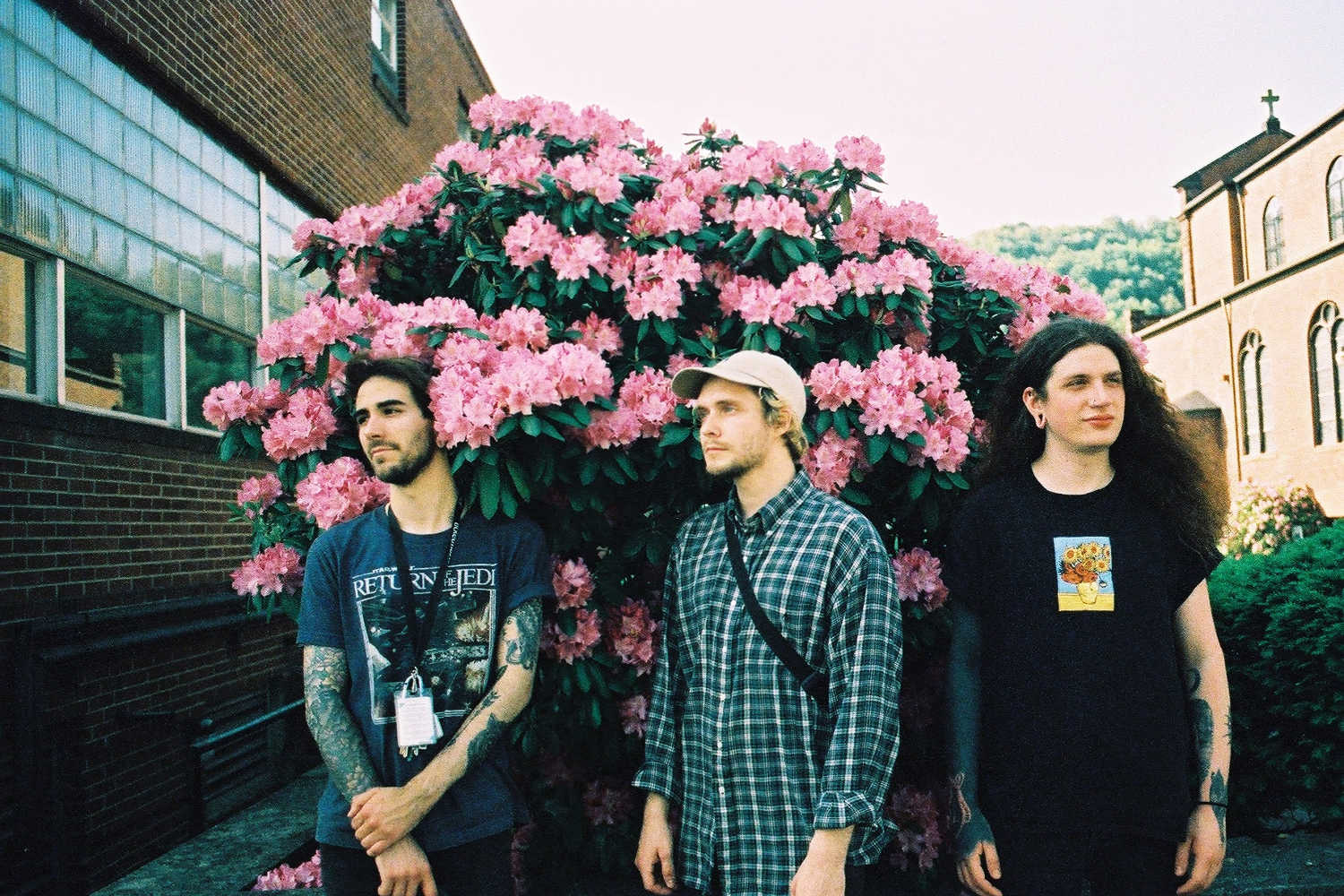 We feel like you’re going to embrace Embracer, if you haven’t already done so, thanks in large to the premiere of their new “Moon Chamber” music video. (The song itself can now be purchased/streamed via group’s Bandcamp page.) A dream pop/shoegaze-inspired alternative rock trio, Embracer’s history goes back six years now since forming in the small town confines of Charleston, West Virginia. In their still short existence, it’s been difficult to define a “sound” for the band, as they have undergone several sound and style changes and challenged themselves to push the alt-rock genre forward as a whole; They can go from dark and brooding to sounding lively and full of colour and fashion in an instant.

The band’s 2014 debut My Father’s Will was soulful and somber while 2016 follow up single “Below” was a further move into the sound of their debut. Then came 2017 full-length No Gospel, a massive left-turn away from the sound that early Embracer fans were coming to expect. The record mostly favours ambiance and dark sound structures that linger behind haunting vocals which made for a wholly unique listening experience. If My Father’s Will and No Gospel were at fairly opposite ends of a spectrum, Embracer’s latest record Color Theory successfully bridges the gaps between the various musical elements that you can observe throughout the band’s history.

“Moon Chamber” is a perfect example of the personal level at which this record is likely to engage with audiences. Speaking of “Moon Chamber,” lead singer and guitarist Jordan Bradley stated, “‘Moon Chamber’ is a first-hand look at what music has felt like to me for a long time. A dream. Sometimes, when I look back at the places I’ve been, people I’ve met, and experiences I’ve had through music… it doesn’t even feel real. In juxtaposition to that, when we’re home reality starts to weigh so heavily on me. That just like waking from a dream, you realize that that’s all it was. A moment that was fleeting, and now it’s gone.”

Color Theory is the brand new full-length from Embracer. Check out the artwork: 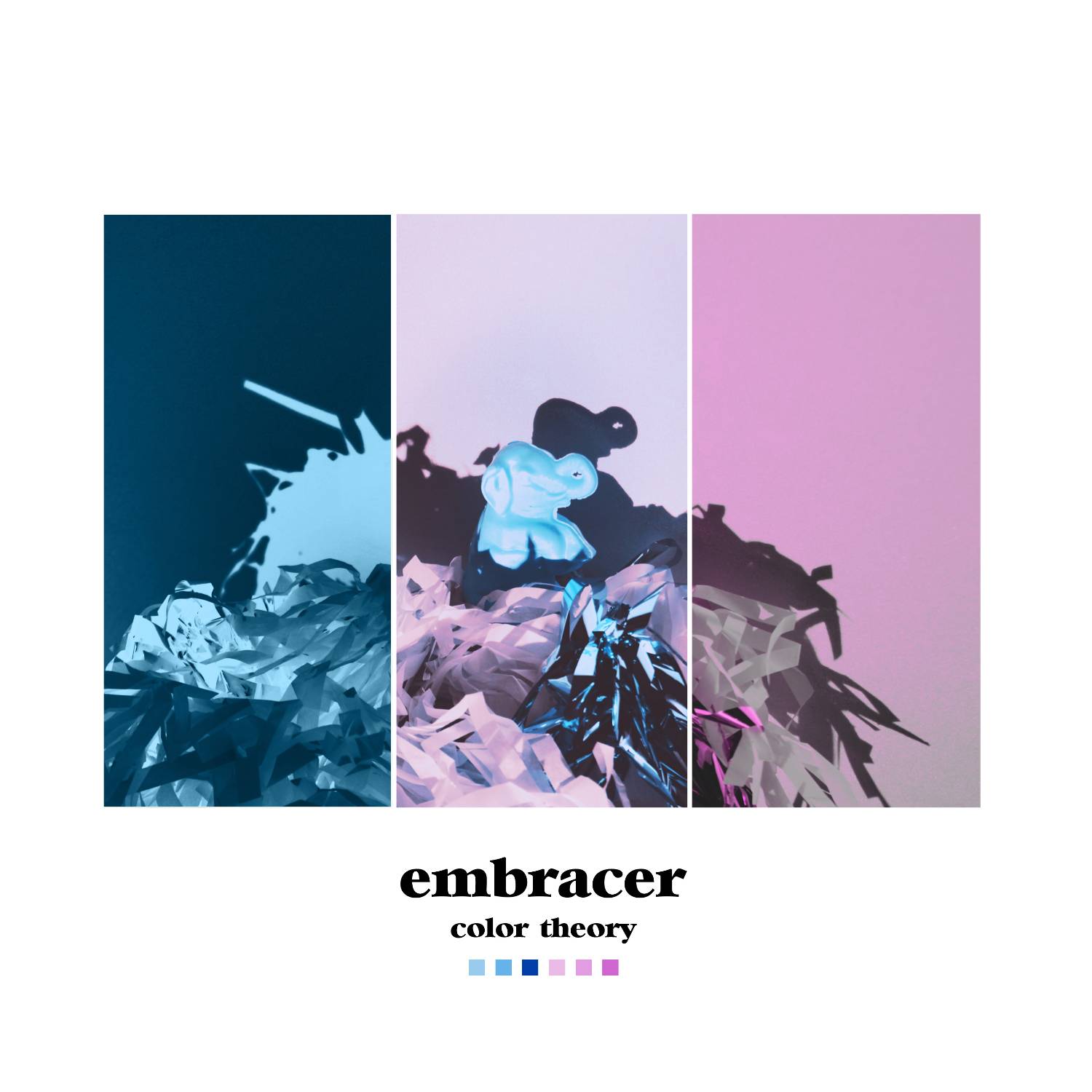 Bradley continues, “In my age, I’ve come to terms with a lot of things. I’m not even going to hold back on this. I’ve been angry about a lot of things, wished for many things, drove myself to points where I was so ready to just say I’m done. But I’m still here. Somewhere between living in a dream, I’ve been chasing for who knows how long now, and the reality of time getting away from me. Responsibilities, obligations, etc. I’ve spoken my piece on this release in many ways, shapes, and forms about a few things that have continued swirling in my head for years. No cover-ups, the good, the bad, and the ugly. If you pay attention to the lyrics on this release, by the end you should know everything about me. I’m just trying to live in the moment while I still have it and not wake up from this dream for the last time just quite yet. ‘Moon Chamber,’ in short, is simply about hoping that I don’t wake up from what has given me so much joy for so many years.”

With such a diverse new single in “Moon Chamber’ and a new album just over a week away, we spoke to lead singer and guitarist Jordan Bradley to ask him a few more direct questions to really engage on a deep level on just what this song is all about. We also touched on what to expect from the release of Color Theory.

There’s certainly a very dreamy kind of vibe that goes along with the video for “Moon Chamber.” Who came up with the video’s concept?

Jordan Bradley: “The concept for the video was a cooperative decision amongst all of us, but I think even when the first demo of moon chamber was done I had an initial idea of a direction to move the video in. After that, it was put on the table, discussed, and we settled on the overall dream-scape setting.”

Take us a little bit through the shooting of the video. Where was it shot and what does it feel like to lay down in fake clouds?

Bradley: “Well, we partially shot the video at a venue that we played in Louisville, Kentucky. The other shots of us laying down and such were filmed at the director’s (Errick Easterday) apartment. As far as what it feels like to lay on fake clouds… itchy. Very, very itchy.”

I think the video works perfectly along with the lyrics and sound of “Moon Chamber” as a piece of music. Would you say the video is a good reflection of the conceptual aspects of the song?

Bradley: “Well first of all, thank you. As we feel the same way. Personally, I would say yes. A moon chamber is an actual thing that can happen to people where said person can go to sleep for days or even weeks in severe cases and snap out of it not even knowing they’ve been out for as long as they have been. I think the videography definitely hits the nail on the head both with the name of the song, as well as everything mentioned in the lyrical content.”

I was reading through the lyrics of “Moon Chamber” and I found it interesting that they touch on issues of disassociation and the loss of control, obviously fairly prominent issues in today’s world. Are the lyrics more reflective of a personal story or would you say the song fits as a sort of social commentary?

Bradley: “You know, I could say that the lyrics go either way but I always like leaving things open-ended. I don’t believe in being ultra-direct as it isolates the topic matter to one specific experience or group. As a writer, you want to leave things open to interpretation sometimes. People tend to take away different feelings, emotions, and experiences based on how they are perceiving the content. In other words, what I was feeling when I wrote the lyrics could be completely different from what you are taking away from it. Which I’ll also add is cool as hell. When this song (and record) were being written I was in a very third person headspace. It was like I was on autopilot every day, and if I’m being completely honest I still feel that very much so. I’m at a point in my life where the life I’ve been living and dedicating myself to since I was 18 isn’t as cohesive anymore. Complicating everything. It’s the strangest feeling, man.

Music has always been an escape from the mundane for me. And every time we come back home from a tour, shows, etc. it all just felt like a dream. Even more so now than ever. Part of me is so tired and wanting for different things, and part of me is keeping me anchored to all of this. So therein lies the internal struggle. I have my reasons for why I needed to write ‘Moon Chamber.’ But like I said earlier, I like for the listener to perceive it however they want. It’s not just our song. It’s for everybody. If you can listen to the words and feel anything at all… then my job is done.”

Listen to “In The Flesh” off No Gospel; heck just listen to the whole album:

“Moon Chamber” comes from your new record Color Theory, due out on October 4th. What’s something you can tell us about Color Theory that will make us really, really excited?

Bradley: “Hmm, well… Color Theory is something completely different for us. It was the most fun I’ve had writing music in a long time. It’s a different sound for us, but we feel like it’s a step in the right direction. I was very open about a lot of lyrical content. I let some ugly things go on this and said some things that I really needed to get off of my chest. It’s a fresh perspective on everything. From the music to the lyrics. We’re just excited to give this to the world and once again have the opportunity to create music that hopefully inspires others in any capacity. Thank you.”