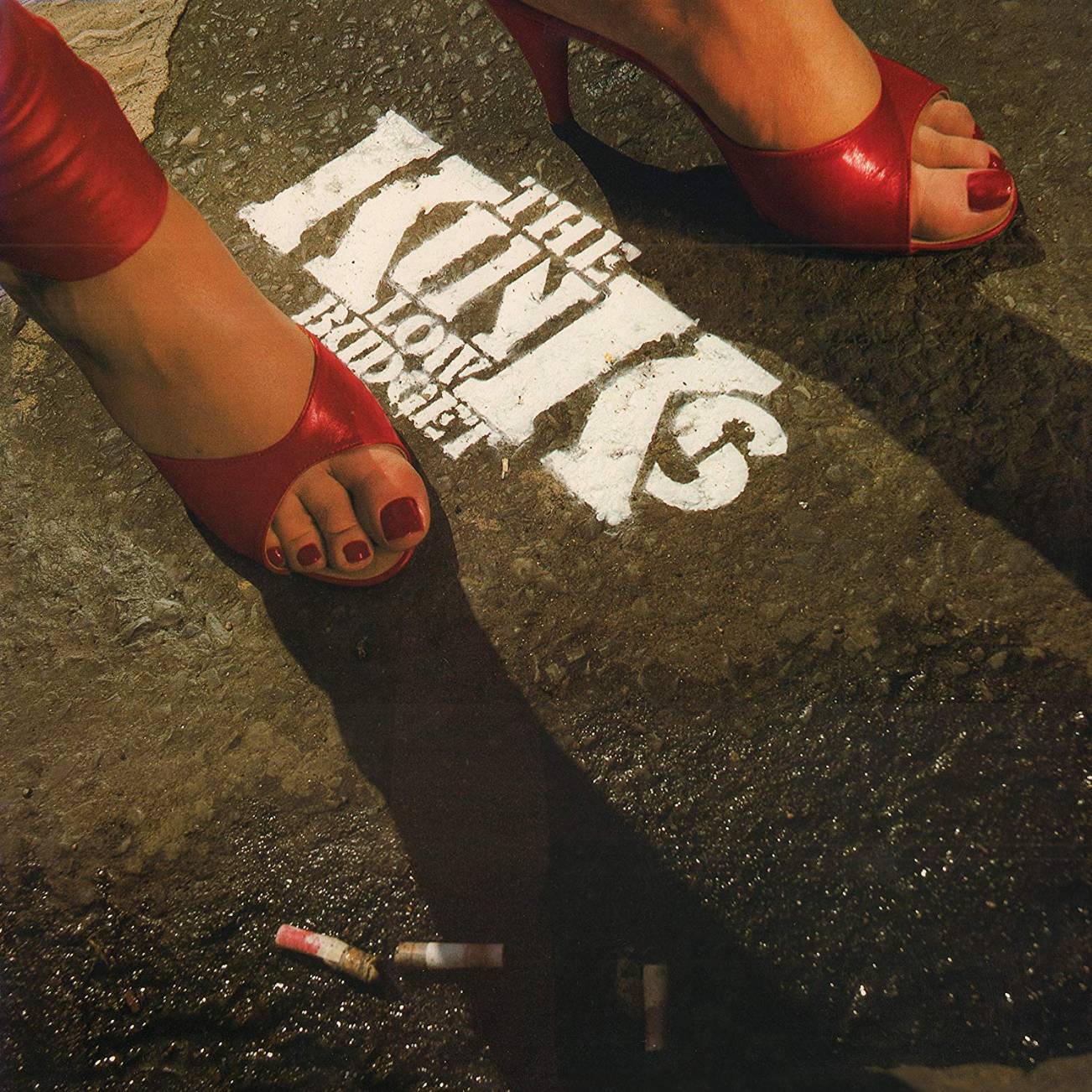 Ever gotten high? C’mon now, don’t lie. I mean really high. I’m talking about being so freaking obliterated that you achieve a drooling level of shit-faced paranoia where every sound is a cop siren, every flash in the distance is an approaching cop light, and every stranger standing behind you in line at 7-Eleven is – a cop. That used to be me, the all-too-frequent shit-faced paranoid teenage drooler. It was the summer of ‘79. And the soundtrack to my mindless “hit parade” of poor adolescent decisions was The Kinks album, Low Budget blasting from the 8-track tape deck that my dad had installed under the front driver’s seat of the family Chevy Chevette. But I digress.

They undeniably were one of the “Big Four.” Along with The Beatles, The Stones and The Who, The Kinks, helped to define the British pop/rock craze of the groovy 1960s. And in the process, they also designed the blueprint that hungry punk and metal acts would follow for years to come. Led by singer/songwriter, Ray Davies, and his guitarist brother, Dave Davies, the band enjoyed an impressive initial string of successful street-smart singles; “You Really Got Me,” “All Day and All of the Night,” “Tired of Waiting for You,” “Sunny Afternoon” and “Lola” all made cannonball-size splashes on both sides of “the pond” from ‘64-‘70.

As the 1970s played on, The Kinks were concentrating more on creating lofty theatrical albums and less on producing snappy hit singles. As a result, the band’s popularity had waned considerably by 1975. Upon signing The Kinks to his newly-formed Arista Records label, music industry mogul, Clive Davis, encouraged the band to refocus on radio-friendly fare. Hence, they scored their first U.S. hit album in years, reaching #21 with Sleepwalker in 1977. However, their next set, Misfits, stalled at #40 in 1978.

It’s easy to take a look at how jacked up the world is today, and reflect fondly on those “good ol’ days” with less than 20/20 hindsight. But the late ‘70s were not all about lava lamp-lit exploits in shag-carpeted custom vans, while the carefree chorus of “Mu-Mu-Mu-Mu-Mu-Mu-Mu-Mu-My Sharona” serenaded horny teens to ecstasy. Truth be told, 1979 was a troubled time. Economic tension was global. There was a perceived energy crisis, gas was becoming a scarce commodity, the Middle East cats were going bonkers and a peanut farmer from Plains, Georgia was in the U.S. presidential driver seat. Musically, disco was heading for its demise and the rock market was flooded by crunchy “new wave” combos, all with spiky haircuts, skinny ties and the word, “The” prefacing their band names.

The Kinks had the “crunch” factor, for sure. They even had some spiky hair, a couple of skinny ties and the word “The” in their trademark logo. So, what would this once influential British band from the ‘60s do in the ‘70s to survive and thrive in the upcoming ‘80s? They took up residency in a famed studio (The Power Station) located in the congested, clattering streets of a major U.S. city (New York City). They climbed neck-deep into the cultural dumpster of those big city streets, ingested the stench, and then allowed that “inspiration” to seep from their artistic pores. And it’s that streetwise authenticity that drips from the grooves of Low Budget, arguably the sexist-sounding, most relevant record of The Kinks’ storied career.

Even the Low Budget album cover was kind of dirty and sexy-looking, a super-tight close-up of red spandex-wrapped ankles seemingly belonging to a presumed “professional” gal standing on a cement street corner, tootsies housed tightly in red heels and surrounded by an array of crushed, lipstick-stained cigarette butts. Painted on the asphalt between her feet… that classic Kinks logo.

A press shot of the band in promotion of the release of Low Budget: 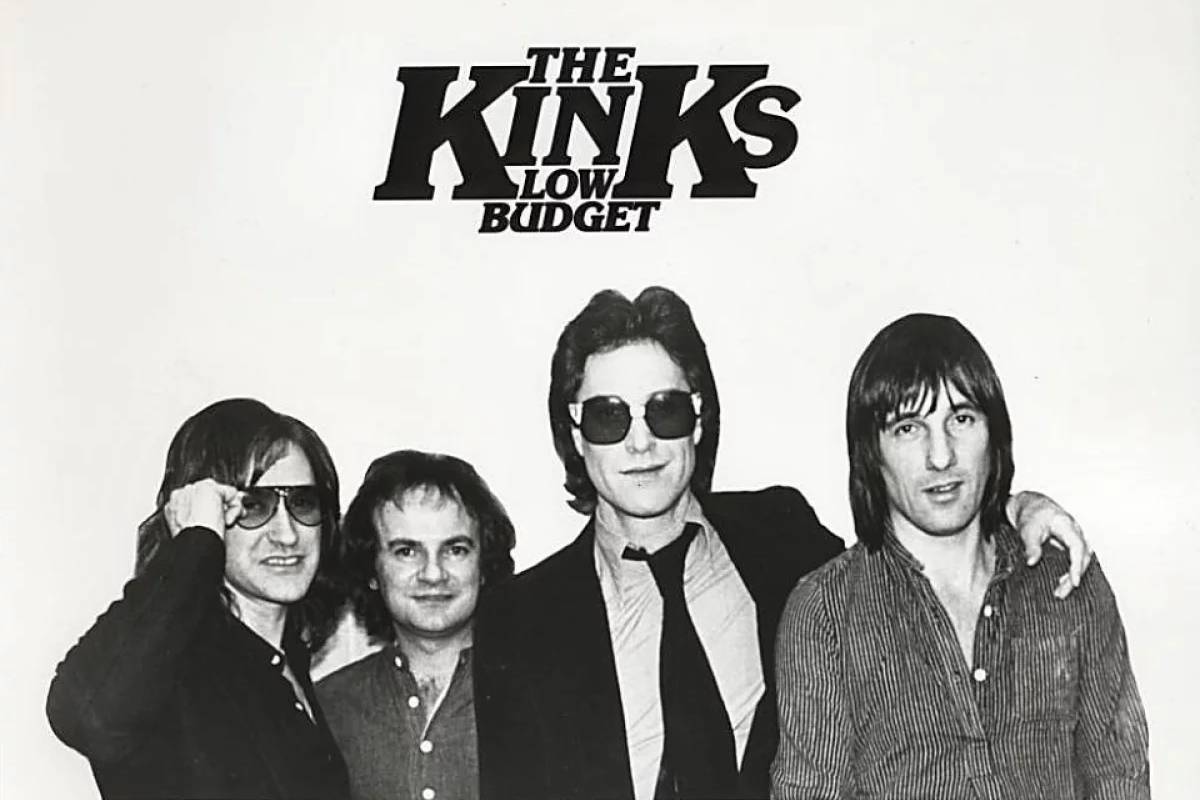 Produced by Ray Davies, the 11-song set found the band with its collective fingers placed firmly on the pulse of current culture at the time. Kicking off with legit punk rock fury, “Attitude” serves as a blistering bitch slap; a four-minute “self-improvement” seminar courtesy of Ray to an individual apparently steeped in an “alternative” lifestyle. “It’s not the makeup, or the way you dress. It’s not your appearance, that they all detest. It’s not your manners, that you gotta improve. Ooooo, it’s your attitude.”

Opening with a delicate piano intro, “Catch Me Now I’m Falling” quickly borrows a little “mo” from “Jumping Jack Flash.” Addressing how the U.S. had few global allies at the time, Ray announces, This is Captain America Calling — calling! Crisp and compelling, this one remains a highlight, although it could have accomplished just as much heavy lifting at half the actual track time. Kudos to Nick Newall for the superb sax work.

“Pressure” flashes a brief glimpse of Chuck Berry’s “School Days,” just before surrendering to a wall of Ramones-inspired riffage. Pointing to a certain physical “tension” release, “National Health” proclaims, “It sure beats Quaaludes. It sure beats cocaine. Even Freud recommends it, ‘cuz it relieves the strain.” “(Wish I Could Fly Like) Superman,” offers an “Everyman” confession of facing real-life struggles. This disco-flavored earworm charted respectfully, just missing Casey’s weekly countdown.

“(Wish I Could Fly Like) Superman” has always stood out as one of the key tracks on Low Budget:

Grounded by Dave Davies’ signature guitar chug, the 200-pound title track was the real deal then, and it’s the real deal now. Free of privileged rock star pretense, Ray admits transparently, “Times are hard, but we’ll all survive. I just got to learn to economize. I’m not cheap, you understand. I’m just a cut-price person in a low budget land.” When pinned against the melodic “Celluloid Heroes” style charm of “Little Bit of Emotion,” one can truly appreciate the wide assortment of “paints” used to create this vivid social aural portrait.

Reminiscent of some of the band’s early work, “Misery” is catchy, fun and bouncy, while “Moving Pictures” resembles the bubbly, giggly drunk gal at the office holiday party. Possessing a particularly unique stylistic DNA, it’s an irresistible record-closer.

In sum, as a drooling, shit-faced teenager, Low Budget clocked me harder than a sack of bricks when it first was released, 40 years ago this week. Even without the drugs, it still packs a powerful personal punch. Buzzing with crisp, relevant social commentary, it remains an important record.