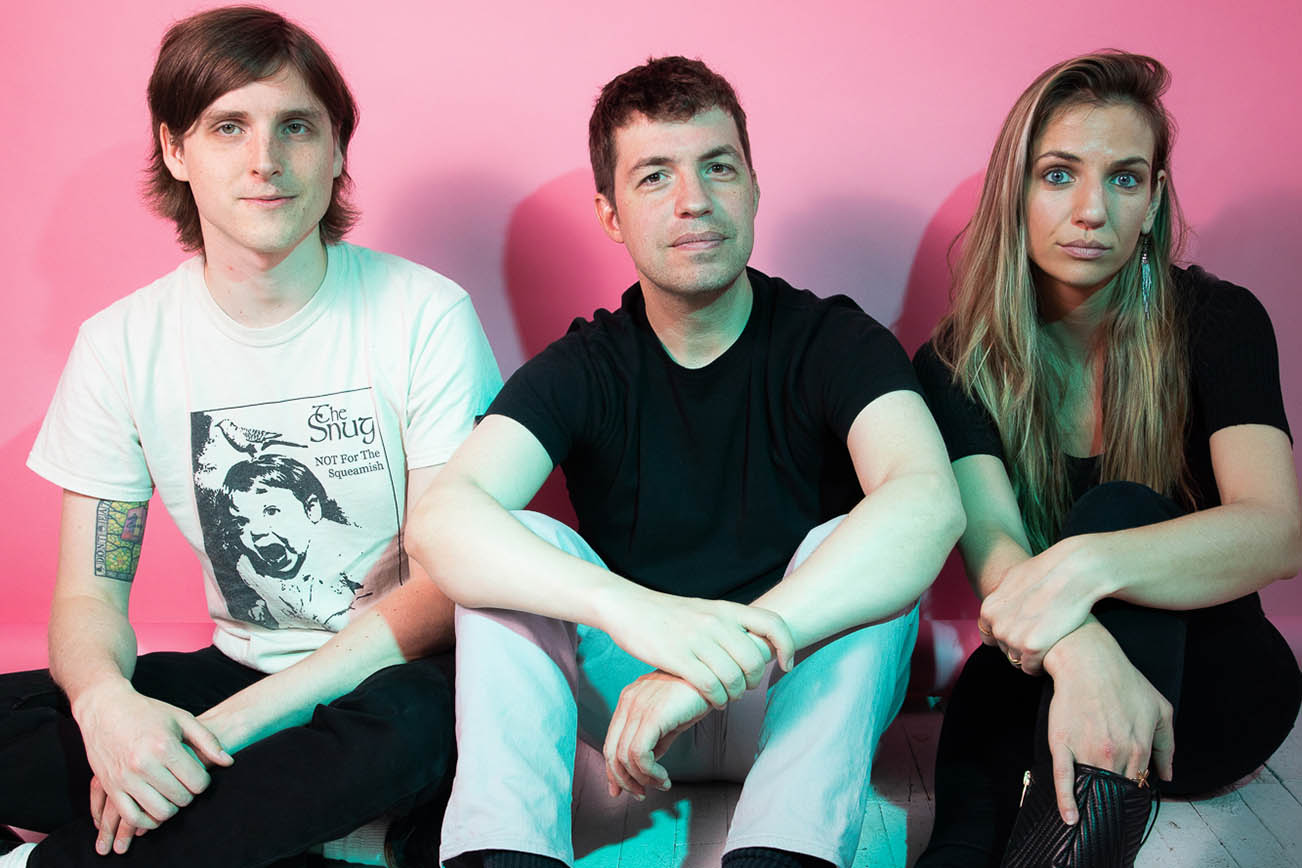 The band’s debut album, Ollie Oxen Free, is due to drop on September 6th, and the short-and-sweet lead single, “Dryer Lint Trap,” is out now (and available to stream on Spotify, Google Play and Apple Music). As the band continues to make its name known, we are delighted to host Michael for this guest blog feature as he details how Le Big Zero formed and why, sometimes, an eighteen-minute album is essentially a ten year process.

Check the teaser trailer for the upcoming Ollie Oxen Free.

“Here we come upon an awkward moment.”
— Vic Ray, The Freshman

By my count, there’s a million ways to do this and most of them are wrong. The path of Le Big Zero was circuitous to say the least. But we got here, and we did exactly what we wanted. It started over a decade ago. I was fresh to Seattle with wide-eyed optimism about my new surroundings; my new city. Things were green. The air smelled bizarrely like air. And the section of town I moved to was rife with things I hadn’t known before, like culture of any kind. This wasn’t suburban New Jersey.

As an exercise, I’d dedicate entire days to writing and recording full songs. Playing all the instruments. It was not about perfection. It was about training myself to commit to ideas. To get in the habit of expressing myself. I hate when artists think they are underground geniuses yet they’ve never put themselves out there. Whether you like it or not, feedback, criticism, and reaction makes you better at your art, even if you don’t agree with them.

From a cheap IKEA couch, I wrote and recorded ideas with a cassette tape recorder and replayed it to myself at night before I went to sleep. Taking bits I wanted to keep or flesh out here and there. The same 120-minute tape was turned over and the process re-began the next day. Scraps became parts, parts became verses and meaningless intonations morphed into words (more on words later). 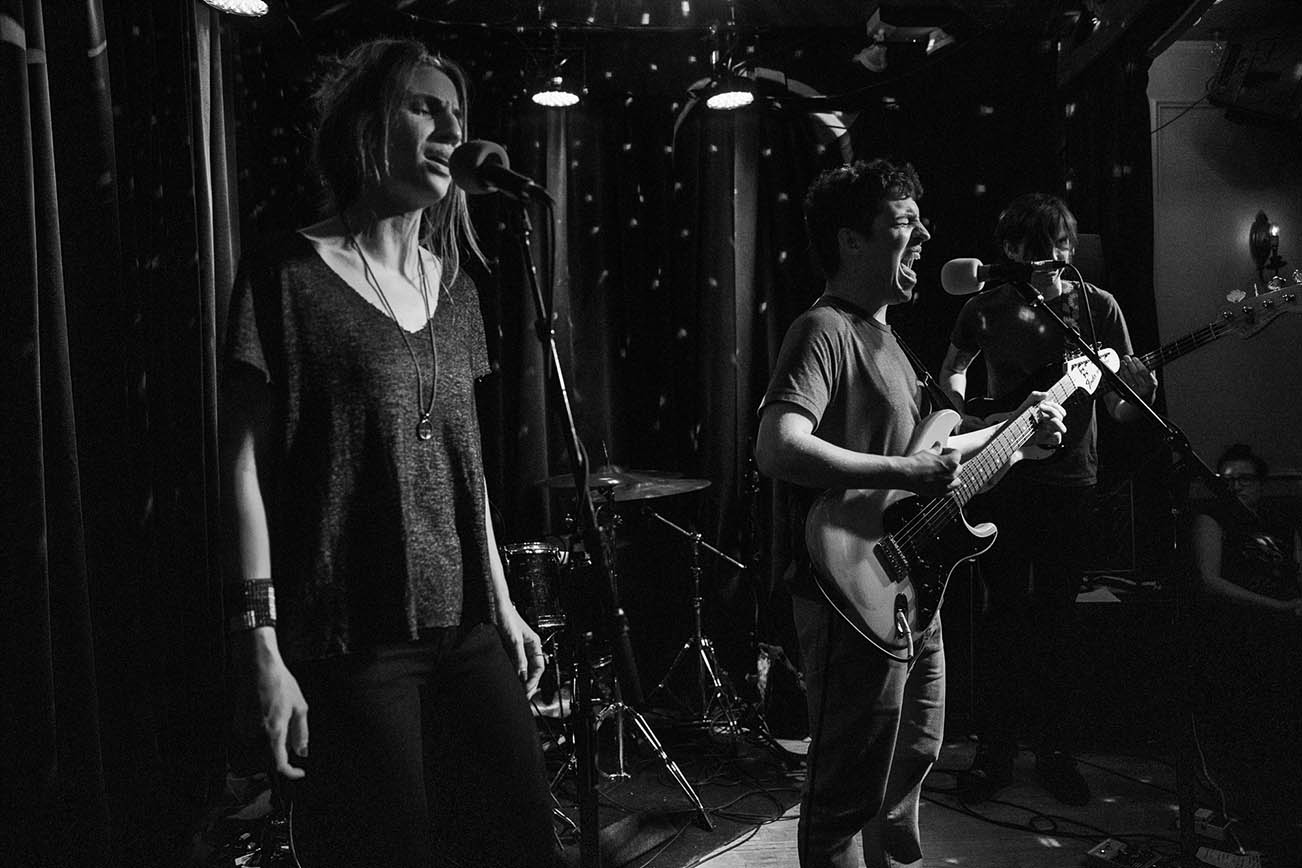 In between, I went down the entire AFI Top 100 movies list. Netflix was my new girlfriend and I had the three DVD plan.

Having started it all on acoustic guitar, the project could have easily gone down a Neutral Milk Hotel route (and I think “Moving Mountains” still does—the demo kinda proves it), but I found myself gravitating to a more intricate, musically demanding sound. So it was fortuitous meeting up with the guys from Cornish College of the Arts, and X-Ray Press becoming a band shortly thereafter.

To say X-Ray Press was simply math-rock would be a disservice to what the band did. It was aggressive and chaotic. It had a post-hardcore flair. It was weird and I loved that. Sound guys and other bands took quickly to us, but many audiences kinda took an unsteady step backwards once we hit the stage. We looked at experimentation in a way that a scientist would. A lot of times people classify music as experimental because it’s atonal or structureless. But experiments have theories they are trying to examine. X-Ray Press’ stranger moments were conceived not through nonsensical wankery in the rehearsal room, but after discussions about how to make something sound different. I was (and still am) proud of that.

When I’m in a project that’s active: writing, recording and touring, it’s tough for me to concentrate on anything else. I’m all in. So, while I continued to write songs for Le Big Zero, it was in the margins for a few years.

Pasuit’s old band, X-Ray Press, with “[She Tried] To Be My Therapist.”

After moving to Brooklyn, with X-Ray Press in the rearview, I dabbled a bit more with Le Big Zero, but soon found myself in Pollens via a Seattle connection. Taking a step back and homing in on my bass grooves with Afro-inspired dance music. Poly-rhythms. It was actually way trickier to pull off than its poppiness would have you believe.

So, the idea still lay dormant.

After illness and depression, and a departure from Pollens, I was wrecked. Emotionally and physically. But life wasn’t stopping. It keeps going whether you want to participate in it or not. Le Big Zero finally had to happen. I’d listened to these songs for so long, I needed to get them out there. Start now. Flip the tape and hit record.

“Keep your eye on the fruit.”
— Captain Tom, Caddyshack II

Focus is overrated. And that whole Malcolm Gladwell 10,000-hours-until-you-are-an-expert is a crock. While it will undoubtedly make you better at what you’re doing, it doesn’t guarantee you anything. What it does do, is give you the opportunity to be honest with yourself. About the depth of your abilities, your relationship to your art and how far you can take it, if pursuing it in a public is in fact what you want.

Playing music has never been a choice. It’s just something I’ve always had to do and I don’t really question it. I don’t think it’s going away. I logged that hours quota long ago. Classical piano lessons. Bass lessons. Rehearsals. Albums. Tours. I’ve never felt like a master at anything, but I know what I like, and have no problem expressing myself about it. Whether talking too much at a party, or making an album.

Get “Institutionalized” with one of Pasuit’s early influences, Suicidal Tendencies.

Growing up, my musical tastes weren’t so much diverse as they were what-the-hell-is-wrong-with-this-kid? I created mix-tapes that featured Juliana Hatfield, Suicidal Tendencies, and Crosby, Stills and Nash in equal parts. It made sense to me. Despite how scatter-brained it sounded.

“You’re in need of a serious attitude adjustment.”
— Coach Conrad, Dazed and Confused

In the current landscape of playlists, singles, and get-to-the-chorus-quick attitudes, Ollie Oxen Free is an album that is meant to be listened to as an album. While the whole thing is less than 20 minutes (so, bugger off if you don’t have the patience for that), there’s still comparatively longish sections without words. Classic pop conventions be damned.

No one’s reinventing the wheel, but I think messing with structure is something that hasn’t been exploited enough in rock. I get antsy writing in the traditional verse-chorus-verse-chorus mode. The Le Big Zero approach is a cross between the baroque idea of developing a theme and the harsh stitches of the Frankenstein monster.  Still, I wanted the music to be accessible, so the vocal melodies and harmonies do a lot of the heavy-lifting to frame the songs in a pop context.

Chord patterns repeat in different songs. A couple of phrases like “I will break it down” happen a few times. They’re linked. They make sense. Like those crazy mix tapes.

A Le Big Zero song comes together similarly. Sometimes, superglue is involved. In a song like “Don’t Know Any,” we start with a pointed call-and-response. Then we settle on a chord that has a bit of stink note in it. It becomes the backbone for the song and drives the momentum. It’s cranky like a Sebadoh song would be.

Lou Barlow would be a great “Rebound.”

The second verse doesn’t match the first verse. They’re more cousins than siblings. Carolina’s harmonies do a lot to make them match.  When I use the terms “verse“ and “chorus“ at rehearsals and am often met with “Which part are you calling the chorus?” What I call the chorus in that song only happens once. But it’s sing-songy, and that’s chorus enough for me. Then we start building instrumentally. Intensely. A few sloppy attempts at guitar hooks. Then stop abruptly. That’s a song right?

The intro to the album plays this motif that doesn’t have a melodic resolve. At the end of the album, the outro revisits that motif in a grander, fuller, more orchestrated manner. However, it still settles on this unresolved chord. An awkward dyad. Throughout the run of the album, you explore all these different ideas and although you may have learned some things, you still arrive at that same point.

“I like words and letters, but I’m not crazy about complete sentences.”
— June Gudmundsdottir, The Player

It’s a very fine and artistically dangerous line between good poetry and shitty, middle-school journaling. I’m impressed when anyone balances that scale in the right direction. However, the thought of pouring my heart out in a lyrically honest and emotionally bare song makes my skin crawl. Anxiety-inducing chills. It’s that dream when you show up naked to class.

I find it a lot easier to tap into a range of emotions, thoughts, and storytelling through a more sardonic lens. Woe-is-me. Woe-is-the-world. Because it’s all kind of silly that any of this exists anyway. The stresses we put ourselves under. The innate approval seeking. We tend to seek and create our own chaos. While there’s this cloud of black-comedy hanging over the album, there’s still moments of truth, self-discovery, and social criticism throughout. There’s probably a lot to unearth in terms of being emotionally guarded, but my therapist probably can’t play in a syncopated 5/4. 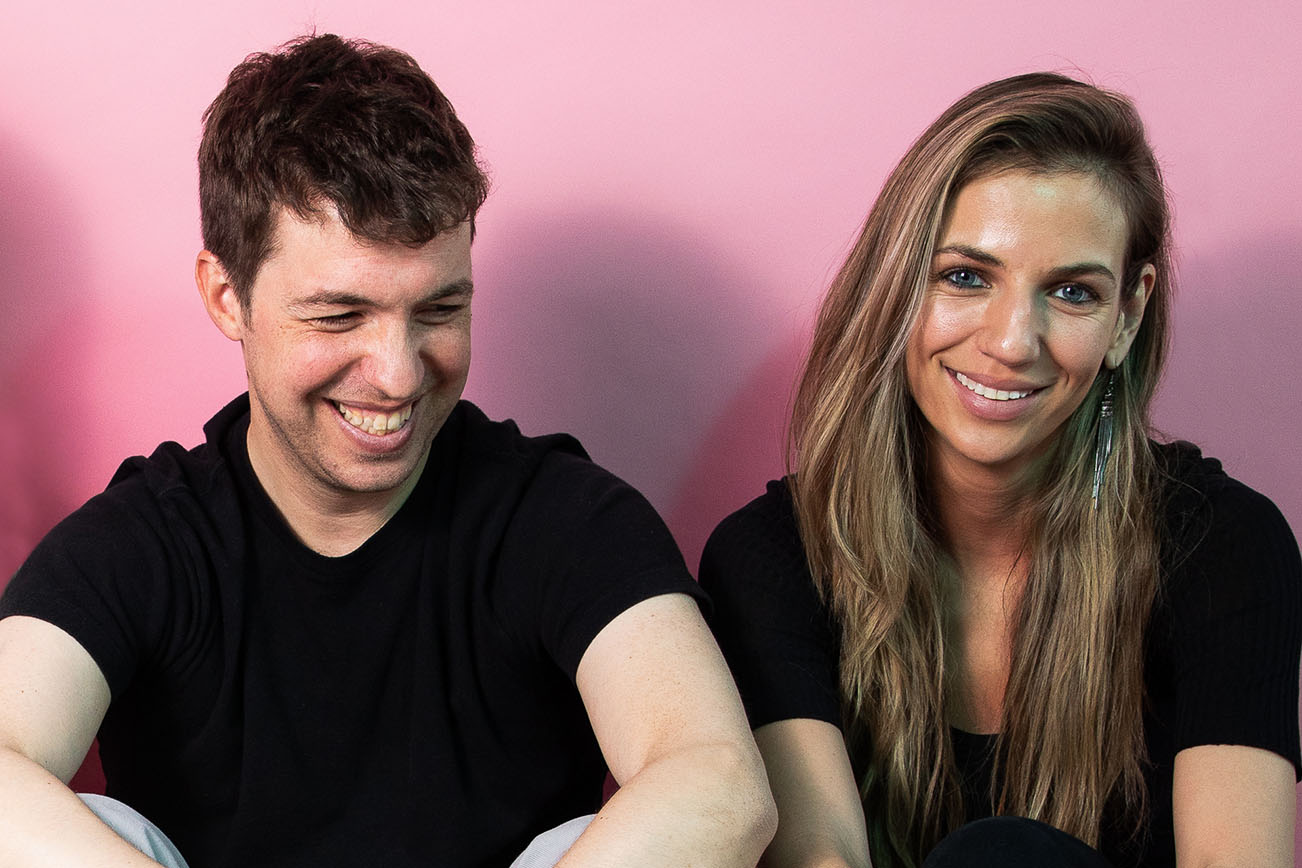 When in doubt, force your friends to be in a band with you. Then make them drink the Kool-Aid.

Carolina and I shared an office at a non-profit forever. Turned out we also shared a brain. Laughing at the same shit. Building stuff together. Calling each other out to make the work better. She left for grad school. She came back. And when I learned she had already started singing in bands, I almost got offended. It was a no-brainer. And there’s nothing radder than a female voice in a rock band.

Dylan Thurston is a good friend and reminded me a lot of my Seattle music crew. In that he is cool as hell and his abilities dwarf mine. Smart percussion majors. Dangerous. We spent a summer fleshing out ideas before getting into the studio and committing to tape. It was all recorded over a three-day weekend. It sounds tight but messy. Its tangents sound purposeful. It’s what we were trying to do. It’s what I had imagined.

And even though Ollie Oxen Free absorbed a decade of my life for a measly EP, and it’s still not even released, we’re already working on songs for the next album. That long maze was just the preamble. Now we’re starting. Writing a little more collaboratively. Playing shows. We’re playing Rockwood Music Hall on August 2nd and an album release show is coming in September.

This article wasn’t intended as long digression to explain how hard anything was, or how much sweat was spilled or how much sacrifice was given. Not any more so than anyone else’s experiences. I still feel like a big dummy. like the rest of us. But it’s also impossible to for me to deny that there’s ten years-worth of life reflected in the album.  I’m just happy it’s out there. Le Big Zero can finally start, like, for real this time.

Just like when you were a kid, keep your ears open for Ollie Oxen Free. 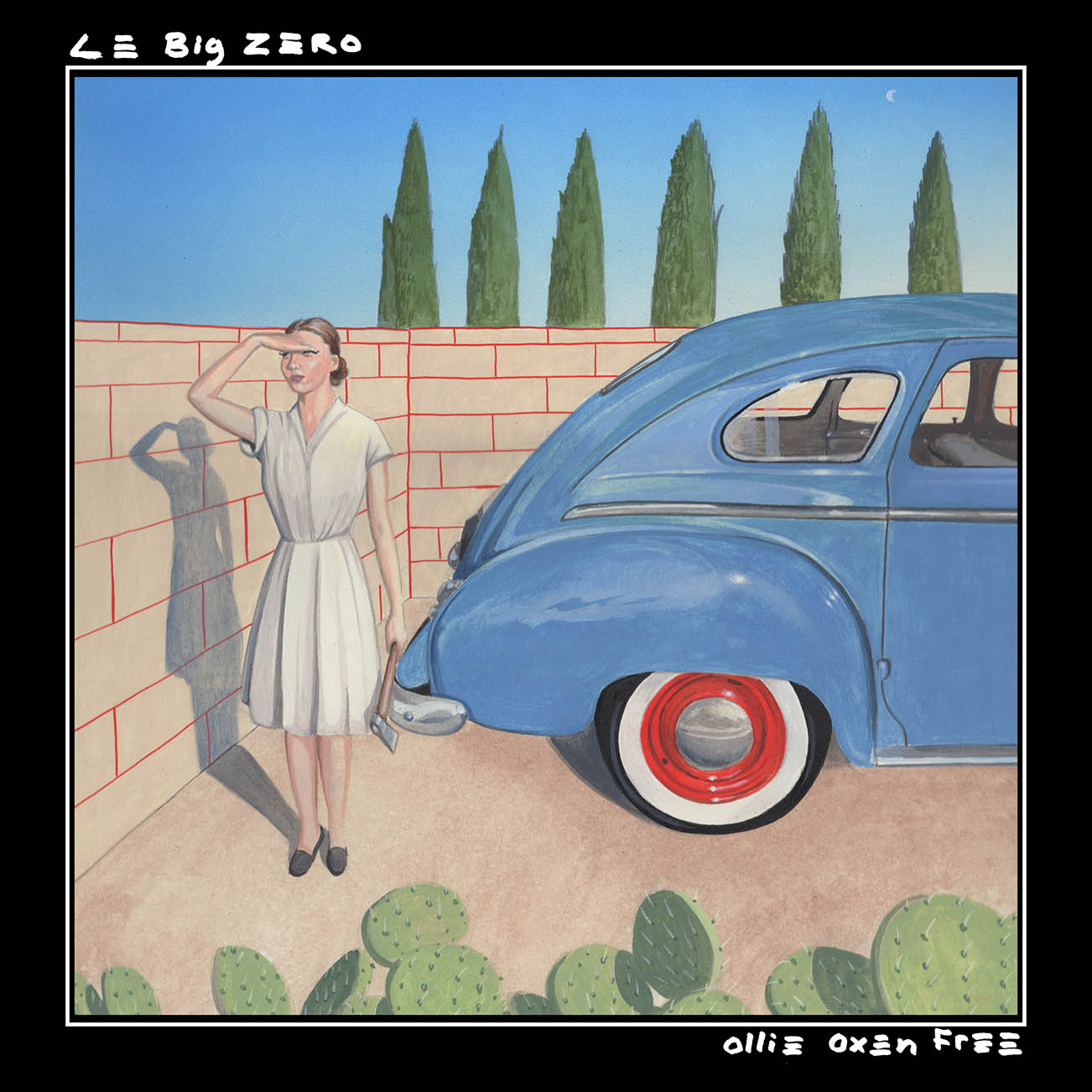